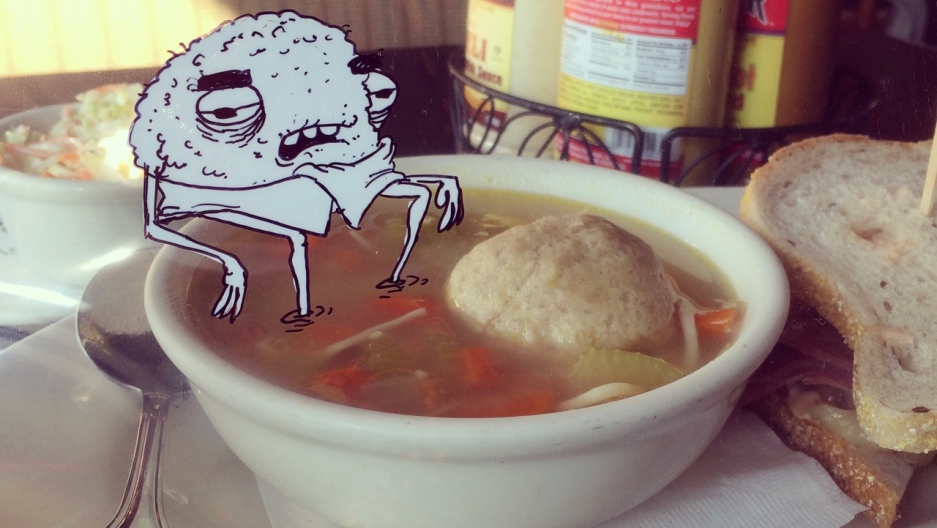 Quick primer:Animation used to be paintedon to transparent pages, "cells," before everything went digital. If you film the cellsat 24 frames per second, the drawingswill appear to move fluidly. Heck, even12 frames per second is good enough to make the characters come alive.

Storyboard artist Marty Cooper (a.k.a.Hombre McSteez) drawsdirectly on transparent cells and then photographs them in the field, allowing his charactersto interactwith the real world. Of course, that trick has been done before, in movies likeWho FramedRoger Rabbit---butthat film required millions of dollars worth of equipment in the 1980s. Today, an iPhoneapp letsCooper make quick and dirty films with nothing more than some office supplies. That kind of freedomwould make an old time animator's eyes pop out of his headwhilehis tongue rolledto the ground like a red carpet.

Cooper'sfirst animated film, "Aug(de)mented Reality," got 4.5 million views on YouTube. It's full of animated weirdness: a giant hermit crab lives in a dumpster, a freezer door opens to reveal a manic penguin, a massive hairball coughs up a cat. And that's all in the first 45 seconds.

And now comes the latest installment. "Aug(de)mented Reality 3" features more of Cooper's inventive (and oddly aggressive) characters made out of inanimate objects, like a paper towel that knocks over a bottle of vinegar, and a pool ball that retaliates for being hit. And at the beginning, Cooper demonstrates how he does it, setting up a tripod and taking photos of transparencies, one by one. But thecoolpart isn't the technology. It's Cooper's subversive sense of humor.