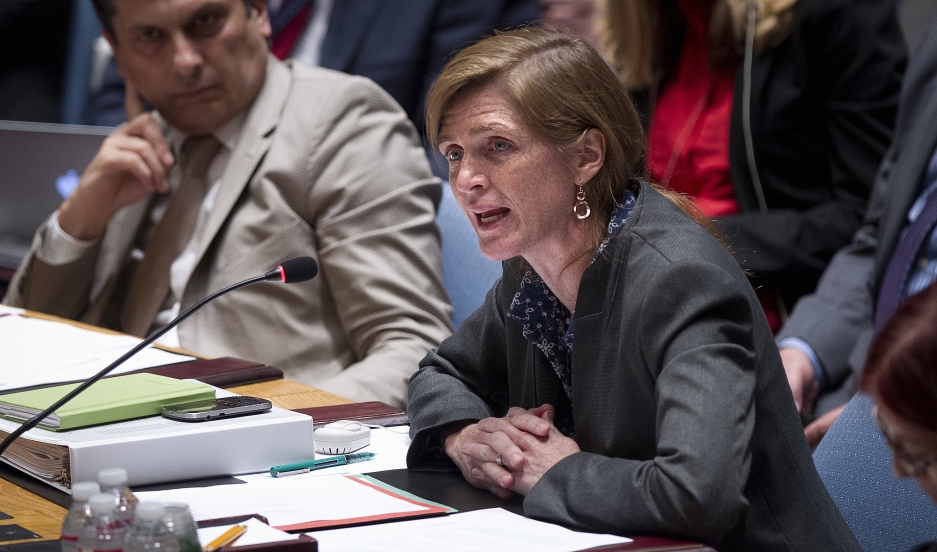 US Ambassador to the UN Samantha Power reads a statement following a United Nations Security Council vote on a resolution about the ongoing crisis in Iraq on August 15, 2014.

In the headquarters of the United Nations, amid the murmuring of diplomats, shocking images line the wall of a quiet corridor. They tell the story of the innocent Syrian men, women and children who lost their lives to the regime of President Bashar al-Assad.

The images were taken by a man who goes only by the name Caesar, a Syrian army defector who worked to document the detainees tortured and killed by the Syrian military. The photographs show the bodies of men, women and children strewn on the ground, cut, burned and stripped naked. Blurred ovals cover their faces and genitals. And there are 55,000 of them, documenting the deaths of at least 11,000 people.

“It’s hard to find words after walking through that exhibit,” says Samantha Power, the American ambassador to the United Nations. “Repulsive, outrageous, enraging. What can one say? Old people, women, kids — this regime has no shame.”

But Power welcomes the exhibit; she says the horrors provide the much-needed context for the UN's long, frustrating attempts to make peace in Syria.

“It can feel laborious, and it can certainly feel like you’re pushing water uphill,” she says. “But all you have to do is walk through the Caesar exhibit photos to know why we’re here and why it’s worth every ounce of energy to try to bring about peace.” 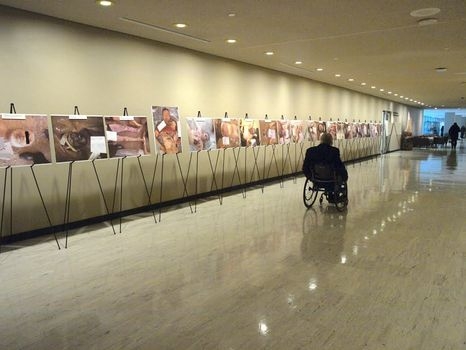 John Hockenberry, host of PRI's The Takeaway, visits the exhibit of Ceasar's photos at UN headquarters in New York.

The brutality captured in Caesar’s images also speak to a larger regional problem, she says: While the Assad regime has violently oppressed and killed civilians, the self-proclaimed Islamic State and other terrorist groups have gained ground and responded with equal violence.

"For as long as the Assad regime has been in power, Syria has been a magnet for extremists and terrorists and people who want to avenge the crimes that he is committing," Power says. And the only solution, she argues, is the political dismantling of the Assad regime.

“It will be extremely challenging to bring about the destruction of ISIS for as long as he is carrying out brutality like this," she says, "and it will be impossible for there to be peace in the region while he is ruling in this manner again — by torturing, by putting barrel bombs on children’s heads. This is not a regime whose existence, whose perpetuation is compatible with peace.”

Bringing down the regime while maintaining what little stability is left in the region will be complicated. Russia’s veto in the Security Council has made multilateral action nearly impossible, while Iran’s support of the regime makes things difficult both on the ground and at the ongoing nuclear negotiations in Geneva.

“While Assad feels he has the backing of Iran and Russia, it is hard for the UN — or for a gathering of countries, [which] would include the United States — to change his calculus,” Power says. But she also optimistically insists that nuclear negotiations with Iran can remain a separate issue.

“Even in the event that we were to get a deal, no one for a minute thinks that mitigates how we should respond to Iran’s bad behavior in other respects," she says.

Power also remains adamant that, despite the length and brutality of the Syrian Civil War, Assad will be brought down and his regime will be held responsible for its acts.

“We’re never going to give up, and a regime that commits acts like this will eventually be held accountable," she says. "It may feel like that day is a ways off right now because this regime has again, tragically, the support of two powerful countries, but that day will come. We have the evidence, we know who’s responsible and they will be held to account.” 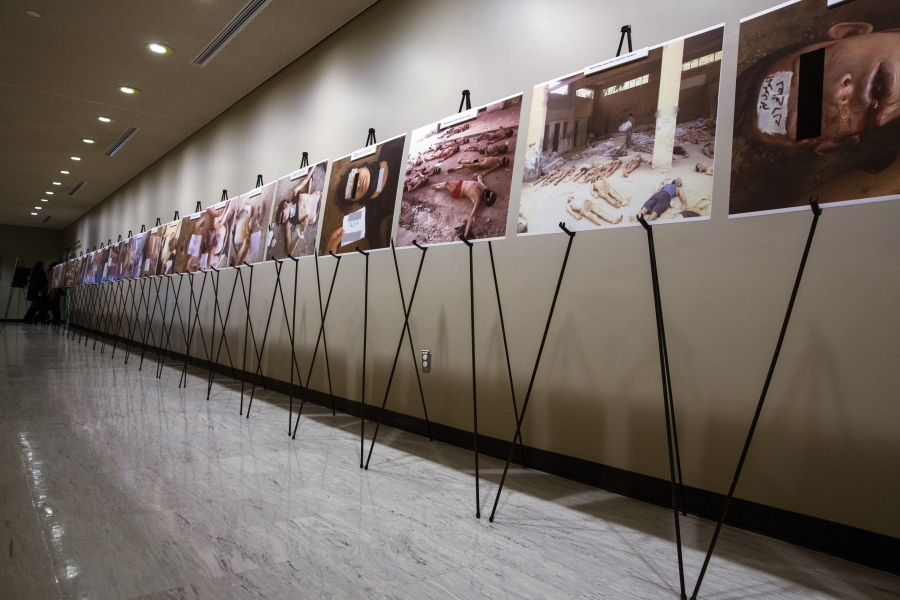 A gruesome collection of images of dead bodies taken by a photographer, who has been identified by the code name "Caesar," displayed at the United Nations Headquarters in New York, March 10, 2015. The pictures were smuggled out of Syria between 2011 and mid-2013.