That seafood you bought from the supermarket or the calamari you had at a restaurant may have a dark history.

Hundreds, maybe thousands of men from Southeast Asia are being forced to harvest those fish, says Martha Mendoza, who helped break the story for the Associated Press.

The AP conducted a year-long investigation that discovered truly shocking conditions. "Men were locked up in (cages). They spoke of being beaten; they talked about people being killed at sea — meager rations, unclean drinking water."

7 questions you should ask before digging into that seafood

The AP reporters talked with more than 40 current and former slaves who had been responsible for catching tons of fish over years. Mendoza says most of them were from Myanmar and had been enslaved for five years, 10 years — or longer. Many weren't even aware their country had changed its name from Burma to Myanmar.

Mendoza says a variety of methods were used to enslave the men. "[Some were] flat out kidnapped. They can be offered a job, which is not the job they signed up for. They can pay somebody to give them work and then when they get there, they're told they must pay further in order to be fed and get shelter. It's called debt bondage."

The men were often taken from Myanmar to Thailand and then on to Indonesia to fish. 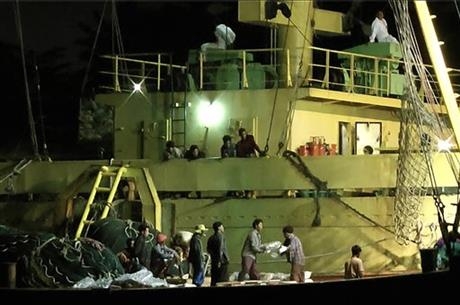 Slave workers from Myanmar load fish onto a Thai-flagged cargo ship in Benjina, Indonesia. An intricate web of connections separates the fish we eat from the men who catch it, and obscures a brutal truth: Your seafood may come from slaves

Interviewing the Burmese slaves was tricky, Mendoza says. Reporters gave a video camera to one of the dock workers who was sympathetic to the slaves. "He carried it over [to the men in the cages] and they talked into this camera, glancing around. And the footage dodges all over the place because a security guard [might be] coming by and we knew also that we needed to keep a low profile. It was not a safe situation for anyone."

AP tracked, via satellite, shipments of slave-caught seafood to various storage plants and distribution centers. Mendoza says a lot of the seafood makes it way to the United States where it can end up as frozen packaged seafood or pet food. The journalists traced the fish to large grocery stores like Safeway, Albertsons, Kroger and Wal-Mart. It could also end up in sushi rolls at a restaurant.

Many government agencies are working to end human trafficking in the seafood industry. There's a lot of awareness, but whether that will lead to any action is another question.

As the journalists were following the shipments, they were also working with the International Organization for Migration to free some of the enslaved men.

"We would not use their images or a video of them talking until we knew they were safe. So, on one hand we were tracking their seafood by satellite and actually stalking the truckloads to the processing plants. Our second line of work was to figure out how to get them to safety," says Mendoza.  "And the men featured in our story have been brought to safety."

One of the men who managed to escape wanted the public to know his story. "If Americans and Europeans are eating this fish, they should remember us."