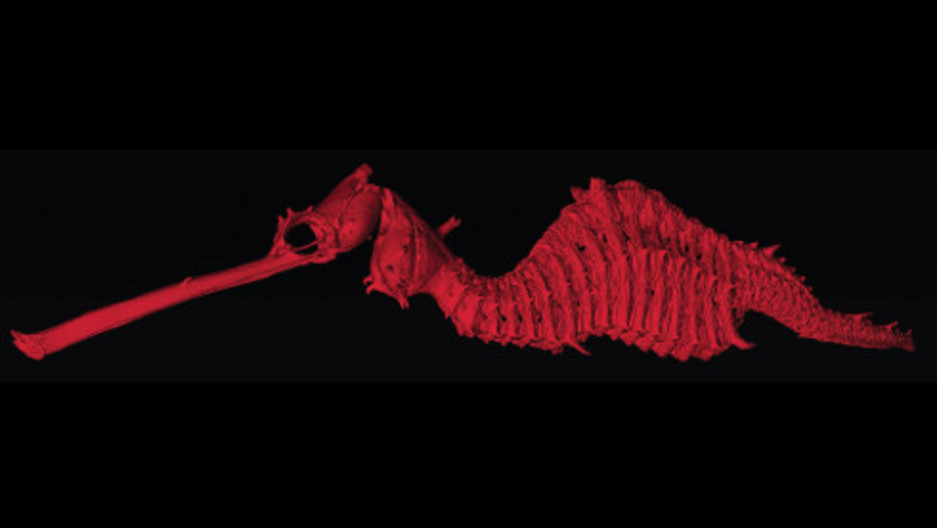 The 3-D skeleton of the ruby seadragon — or Phyllopteryx dewysea — constructed from thousands of x-rays obtained with a CT scanner. The color was added to represent the seadragon's hue in the wild.

With its vibrant red coloring, the ruby seadragon hardly seems like a stealthy creature. Yet the marine fish evaded discovery until only recently.

The delicate seadragons live exclusively in the waters off the southern coast of Western Australia. For the past 150 years scientists have assumed that there are only two species: the orange-tinted leafy seadragon and the yellow-speckled common seadragon.

Then Josefin Stiller, a graduate student at the Scripps Institution of Oceanography, took a look at a tissue sample sent to her by Perth’s Western Australian Museum. Stiller is studying the relatedness of seadragon populations, and spends her days examing such samples, some from live seadragons and others from museum collections.

The sample from Perth didn't look like like anything special, but DNA sequencing revealed something else: It came from what seemed to be a third, previously unknown species of seadragon. “It was a huge surprise,” Stiller says.

​Stiller then requested the full animal, a male carrying several dozen babies under its tail. She used a CT scan to obtain 5,000 X-ray slices and assembled them into a rotating 3-D model. “It revealed distinct skeletal features,” her adviser at Scripps, Greg Rouse, says. “It was clearly a different species.”

Color had drained out of the creature — a byproduct of being preserved in ethanol — but a photo snapped when the seadragon was captured in 2007 revealed that it was originally bright red. Hence the name Stiller and her collaborators gave it: the ruby seadragon

Nerida Wilson, a senior research scientist at the Western Australian Museum who worked with Stiller, dove into the museum collection to see if she could dig up any more ruby seadragons. “I'm not sure how many jars of wet-preserved animals and drawers of dried specimens we looked through,” she wrote in an email.

But Wilson hit the jackpot again, this time unearthing one that had washed ashore in Perth in 1919. Stiller also tracked down two more ruby seadragons archived in the Australian National Fish Collection.

The researchers suggest that one reason the fish evaded discovery for so long is because it seems to live at depths below 30 meters, deeper than most recreational scuba divers venture.

Stiller plans to return to Australia to search for the ruby seadragon, as well as more of its common and leafy cousins, in the wild. Beachcombers might also help gather more information about the newly discovered species. In early March, just two weeks after the research team published their findings in Royal Society Open Science, a family walking the shore reportedly came across a ruby seadragon, which one member recognized from a news story about the discovery. “I wonder how many more records of the new species will pop up over the next year or so,” Wilson mused.

Whatever the tally, the ruby seadragon’s obscure existence is most certainly a thing of the past.