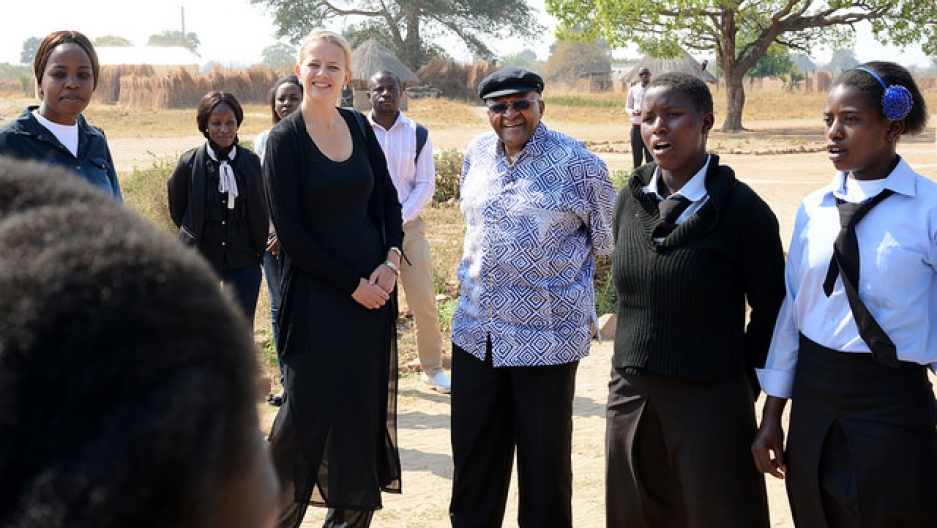 A global issue like child marriage takes a global effort to change it, and that ‘s the idea behind Girls Not Brides, an organization founded in 2011 with this mission: end child marriage in one generation. Mabel van Oranje, the chairwoman and founder of the organization, has ambitious plans to meet that goal.*

Madeleine Brand [MB]: Why don’t we begin with an overview. If you could, give us a sense of the scope of the problem. How widespread is child marriage?

Mabel van Oranje [MO]: Child marriage is an enormous problem. In fact, it is happening to 15 million girls every year, which means that every two seconds somebody’s listening to this radio program, a girl somewhere in the world is getting married. And it’s happening across continents, across countries, across religions—it’s really everywhere.

On one hand, this is a major human rights abuse, but at the same time it’s also having a severe impact on our global efforts to end poverty. Imagine you were a 12-year-old growing up in Ethiopia and you think you’re having a happy life, going to school, etc. Then one day your parents say, “We think it’s in your best interest to get married.” And they pull you out of school. Basically, it’s not just the end of your education, but any chances you will have in your life to earn a decent living for yourself and for your family.

Girls Not Brides has a 'theory of change' for getting to a world without child marriage.
Explore it

Then, what we often see happen, is these girls end up in relationships with husbands who are much older than they are, so they’re often in abusive relationships. These girls are often the victims of domestic violence. And then they often get pregnant very quickly after their marriage.

MB: So what do you attack first? Your goal is to end child marriage in a generation. It’s a very complicated, multi-layered problem with lack of education, with religious and cultural traditions, with poverty economic problems. What’s most important?

MO: This is the question we asked ourselves three years ago. We said, “Woah, it’s such a big problem and it can’t be that nobody’s paying attention.” What we realized is first of all we needed to raise awareness about this issue. We needed to take the taboo away. We did that by having people like Graça Machel, Kofi Annan, and Archbishop Desmond Tutu commit to changing it. That really helps.

Then we created this partnership called Girls Not Bride. We decided although global visibility is important, ultimately change is going to happen in the lives of these girls and their families  at the grassroots level in the community. And so, in the last three years, Girls Not Brides has grown to a partnership of  now more than 400 members from more than 60 countries, all over the world. Some of them are very big organizations, like Care USA or Human Rights Watch. But many of them are courageous individuals who are working in villages far away from big urban centers, in places like Tanzania, Nepal, Bangladesh, and Senegal, trying to change these norms.

What we have learned in these last few years, by looking at what’s working and also, of course, looking at what’s not working, is that there are four sets of interventions that will really help to make a difference.

Secondly, what we need to do is sensitize communities. We need to help everybody who’s powerful in the community, which is often the men, realize how harmful child marriage is and that it’s actually in their interest to make sure the girls don’t marry too early.

Similarly, we need to help girls understand their reproductive health, because all too often you see 12-year-old girls who get pregnant never having heard about what sex is and how you get pregnant. If we can make sure that that doesn’t happen, then girls don’t have to get married at an early age.

Lastly, we need to make sure not only that countries have laws that say 18 should be the minimum age for marriage, but also that these laws actually get implemented.

MB: How do you combat the idea that here are well-meaning but outsider groups imposing their cultural and religious norms on a traditional culture? That maybe the village elders say, “You don’t know our mores. You don’t know our traditions. What are you doing coming in here and imposing your view on our way of life?”

MO: Well, I understand that you might be slightly skeptical. I agree that if this were outsiders coming in it would probably not work. Exactly like you say, then the people from the community would say, “Look, we don’t agree.” But local organizations that are actually the ones who are driving the message and helping people—whether its in Zambia, Kenya, Sri Lanka, or Afghanistan—understand the harms of child marriage.

MB: Is it possible to change attitudes given the state of poverty that a lot of these communities are in? In other words, is the answer to this modernization and economic mobility? As such, it’s very difficult for one organization to change the economic fortunes of a region.

MO: I think economic change and the empowerment of girls go hand in hand. We know that the four kinds of interventions we’ve identified make a difference. What I’m more concerned about sometimes—what can keep me awake at night—is this question of how we make sure that all these interventions reach all the 15 million girls who are at risk of marriage every year, year after year after year.

At the same time I’m hopeful, because we know very little about how social norm change happens. We know that once it starts happening it can go really fast. For example, take the issue of foot-binding in China. Families would wrap their girls’ feet and tie them up so tightly that they could never properly walk. That happened for hundreds and hundreds and hundreds of years.  But once the change happened, it only took 20 years from foot-binding being something that you were proud to do, and that was the honorable thing to do, to foot-binding becoming something that as parents you absolutely did not want to do for you daughters.

Similarly, if you think about social norms around gay and lesbian rights in America, who could have predicted 20 years ago that the Supreme Court might allow gay marriage in every state? Or think about smoking. I remember you would end enter an airplane and up to row 14 you couldn’t smoke and from row 15 on you could smoke. That would be completely unacceptable nowadays. So we know that this kind of social norm change—how people look at what is acceptable and what’s not acceptable—can really change quickly. You would almost say overnight. And so I am hopeful that the same can happen for child marriage.

*This interview has been lightly edited for readability.