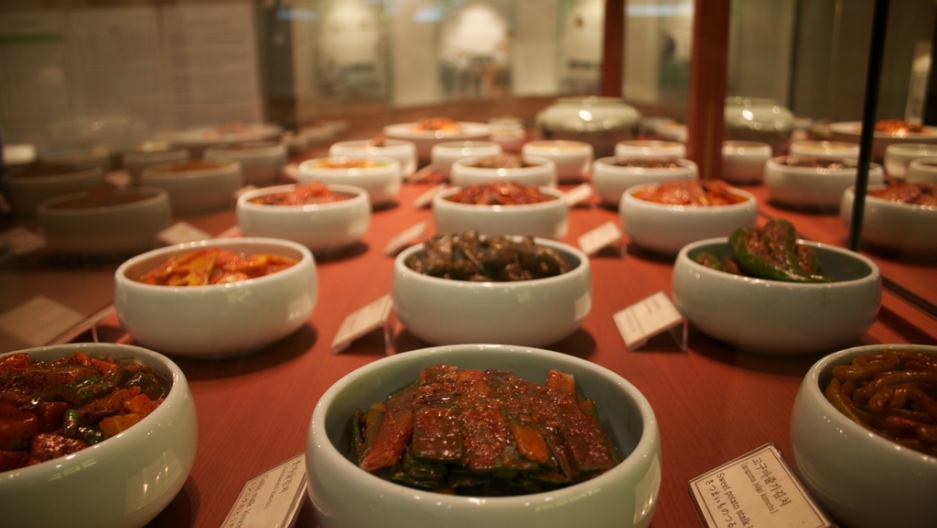 SEOUL, South Korea — Until a few years ago, legions of food-loving Americans had never heard of bulgogi or kimchi, those Korean staples that are now available in most cities and towns across the country.

Sushi is so 1980. Thai went the way of the American Chinese fast food restaurant long ago. But this last decade, this has been the time for Korean. Kimchi, despite its pungent aroma and intense spice, has gone mainstream in America.

But unlike most other food trends, the popularity of Korean is not the result of some celebrity chef’s declaration, or the opening of well-placed restaurant in New York. The Korean trend is the result of a slightly more corporate undertaking. The truth is that behind every bulb of kimchi and pot of rice wine, and hovering over every sizzling plate of barbecued pork and beef, is a stuffy Korean bureaucrat.

The South Korean government — sometimes aided by the more nationalistic of its citizens — has gone to insane lengths to export its cuisine to America and beyond.

“There’s a recent sense of nationalism, of coming out of a traumatic and painful past,” said Joshua Hall, who runs a website called WineKorea. He was referring to Korea’s relatively recent struggle with colonialism and civil war. “There’s a strong desire to assert an identity. Food is less aggressive, a fun way to assert nationalism.”

So like it has supported the rise of its country’s pop music all over Asia and its technology all over the world, the government is peddling its food as well. And it is pulling out all the stops. It is a maze of sometimes hilarious promotional campaigns and government-sponsored studies.

Here are some of the best examples.

Chefs prepare traditional Korean food, "bibimbap," to serve 12,013 people on Oct. 23, 2013 in Seoul, South Korea. The Korean food industry kicked off a mammoth festival in downtown Seoul to promote its campaign to establish a day that celebrates Korean food.

The Korean Food Foundation is the government agency tasked with spreading the joys of Korean food the world over. But sometimes, its zealous bureaucrats can go a little overboard.
In 2008, one government study claimed that eating Korean food increases sperm count and makes you manlier.

A team of researchers, which is probably a polite name for them, studied subjects eating pork cutlets and burgers and compared them to people feasting on hearty servings of bibimbap and kimchi. They concluded that those eating the Korean food were blessed with increased sperm activity and a rise in male hormones.

The report was swiftly and widely ridiculed. And is now missing from the agency’s website.

Bulgogi is my pride

In March 2014, a full-page ad appeared in The New York Times. “Bulgogi?” read its headline. Below it was a photograph of Shin-Soo Choo, an outfielder with the Texas Rangers, holding a slice of beef between chopsticks.

“Spring’s here and I’m ready to play! And do you know what got me through training? Bulgogi. Try some at your favorite Korean restaurant. It’s delicious!”

So natural. So believable.

Samgyeopsal, or barbecued pork belly, is the Korean classic.

Dished out at your local hole in the wall, this stuff is for kicking back with friends over copious amounts of beer or soju (or, if you’re feeling adventurous, mixing the two to create a hangover-inducing cocktail called somaek). This is a blue-collar meal with countryside roots. But not according to Psy, the goofy Gangnam Style rapper, who thinks we’ve got it all wrong.

Cool people actually pair their samgyeopsal with champagne, he proclaimed in a 2013 commercial that was laughable to just about every Korean who’s grown up with genial family Fridays at the grill. Soju, that cheap vodka-like liquor, is so backwards.

Whatever floats your boat, Psy.

A dazzling selection of some Korean cuisine in Seoul, South Korea.

Korean Food Fairs are events in which the government promotes its beloved cuisine around the world. At these events you can get a sampling of Korea’s best.

Korean food is not necessarily as healthy as everyone says it is.

Live in Seoul, and you’ll regularly hear that Korean food is superior to the heathen Western diet of hamburgers and pizza.

There is some truth to this. But Korean food is hardly the salad of cuisines. Koreans have the highest rate of stomach cancer per capita, according to a 2002 study. And kimchi and soybean pastes have been identified as a risk factor. The World Health Organization says that nobody should eat more than 5 grams of pickled food a day. South Koreans, meanwhile, eat 13.4 grams.

And Korea has no shortage of its own heart attack-inducing delights. Budae jjigae, a Korean stew made with liberal doses of spam, hot dogs and ramen noodles, is a hit among the younger generation. In Seoul, you can order a Korean pizza topped with cheesy French Fries. Oh, and let’s not forget the infamous ramen burger.