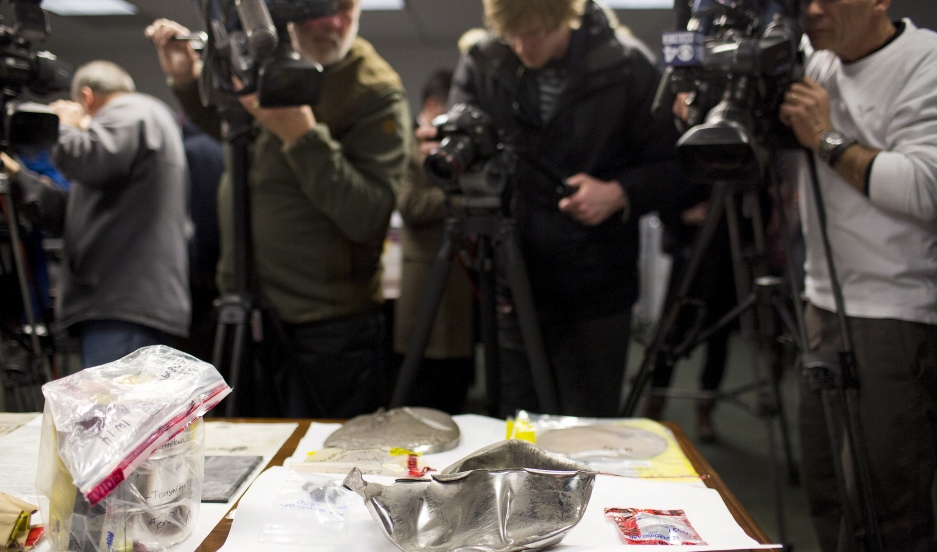 The Boston Marathon bombing trial jury on Thursday saw the remains of a pressure-cooker bomb that prosecutors say Dzhokhar Tsarnaev hurled at police during a gunfight four days after the bombing as well as jihadist files recovered from his laptop.

He was only 19 years old when the attack took place. But prosecutors at the Boston Marathon bombing trial want to portray Dzhokhar Tsarnaev as a committed radical, an Islamic extremist, and a willing co-conspirator in the 2013 attack. The evidence they have showed in court so far was meant to show the Tsarnaev was radicalized long before the attack took place two years ago.

For its part, Tsarnaev’s defense team is working to persuade the jury that Dzhokhar was something else entirely. His lawyers suggest that Dzhokhar was a misguided teenager from a family of Russian immigrants, who was either led astray or pressured by the real extremist mastermind behind the bombing, Dzhokhar’s older brother Tamerlan.

Tamerlan Tsarnaev was killed after a shootout with police in a Boston suburb a few days after the explosions near the marathon finish line.

Some of the latest evidence presented at trial in the federal courthouse in Boston came from a laptop, cell phone, hard drive and other digital devices said to either belong to, or accessed by, the younger Tsarnaev brother. Prosecutors showed the jury links to dozens of speeches by the radical Muslim cleric Anwar al-Awlaki.

FBI computer expert Kevin Swindon testified about a type of religiously themed music on Tsarnaev’s digital devices. Philip Martin, who is covering the trial for WGBH News, says some of the music found on Tsarnaev's devices was described as the “a cappella battle hymns of global jihad.”

Martin says the prosecution is suggesting that Tsarnaev’s apparent interest in such music speaks to his motivation. “They said that this is radical inspiration,” Martin says.

Swindon said he discovered PDF copies of the English language online magazine put out by al-Qaeda in the Arabian Peninsula called, Inspire. The publication extolls the virtues of violent jihad and martyrdom and includes some step-by-step instructions for making homemade explosives.

An article titled, “Make a bomb in the kitchen of your Mom” suggests using a pressure cooker as “the most effective method.” This is precisely the type of device that the Tsarnaev brothers are accused of planting near the Boston Marathon finish line.

But Martin says there are still unknowns when it comes to those devices. “We know what they look like. We know what was inside. There were BBs, nails. They were instruments of death,” Martin says. In addition, there is video footage that is said to show the Tsarnaevsplacing the backpacks containing the pressure cooker bombs within the crowd of marathon spectators.

Law enforcement officials, however, suspect that these two brothers were not working alone, Martin says. “They do not believe that a bomb this sophisticated, that caused the type of injuries that it did …without having been tested prior to exploding, that this had to have involved help from someone else,” Martin says. But he says this is a question that has not been addressed in the Tsarnaev trial so far.

Tsarnaev’s defense team has the opportunity to present its case starting on Monday. And it is expected to focus on something brought up Swindon, the FBI’s cyber expert. Defense lawyers will ask him about access to those digital devices said to be linked to Dzokhar Tsarnaev, in particular a desktop computer found at his home in Cambridge, Massachusetts.

Martin says Swindon was asked if multiple users had access to the computer. “He said, ‘Well, sure. There were apparently several people using the the computer.’ That leaves room for the defense to say, ‘This material that you’re finding is not the domain of Dzokhar,'” Martin says.

“They’re going to say, ‘This is from someone else, perhaps Tamerlan,’” he says.