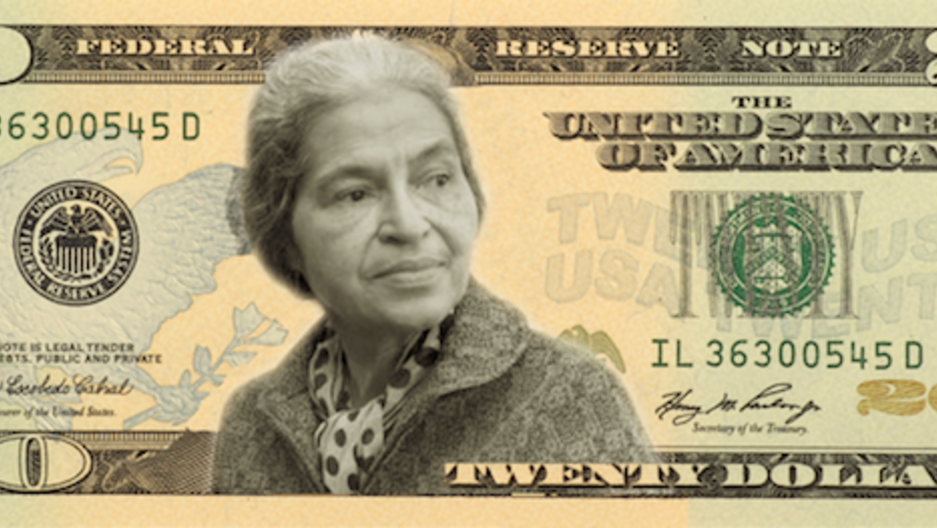 A rendering of civil rights hero Rosa Parks, one of a group's candidates to be on the US $20 bill.

It's time, says a nonprofit group, for a woman to break the monopoly of men on US paper currency. And Mr. Jackson, the Women On 20s are targeting you. One of its candidates to replace the Seminole-fighting frontiersman turned president: A Cherokee leader named Chief Wilma Mankiller.

The group, which hopes to have a woman on the bill by 2020, the 100th anniversary of the amendment giving women the right to vote, has assembled candidates with the help of historians and has asked people to vote on its website.

“We have a ballot with 15 candidates because we couldn’t make it any smaller,” says the group's founder, Barbara Ortiz Howard. “We initially thought we’d have 12, but we could have had 1,200.”

Want to cast a vote?

You can learn more about the nonprofit Women On 20s and the 15 candidates on their ballot. If you like what you see, then you can vote through their web site.
Vote here

Ortiz Howard says that this symbolic gesture can make a powerful statement. She says having a woman on the $20 bill would send the message that women are not just strong and powerful, but also deserve equality under the law.

“Few people realize that it has been only 100 years since women got the right to vote,” she says. “We need to be doing something huge.”

Last summer, President Barack Obama said it would be "a pretty good idea" to put more women's faces on US currency. Pioneering women's rights leader Susan B. Anthony and Lewis and Clark guide and explorer Sacagawea made it, but on little-used dollar coins. Helen Keller also made it, but on the back of the 2003 Alabama quarter.

Ortiz Howard says the non-profit group specifically selected the $20 bill for their campaign because of Jackson’s troubled history with not just Native Americans and African American slaves, but also with US law.

“Andrew Jackson flew in the face of the Supreme Court and the Congress when he was so belligerent towards the central bank,” she says. “He wouldn’t recharter them, he took money out of the bank and the Congress censured him. He’s a really ironic choice for paper money — some even say that maybe it was an inside joke at the Fed to put him on it because he’s so detested.”

Women On 20s plans to send a petition to Obama after the website vote on its candidates concludes. The Treasury secretary has the power to authorize a change to US currency. The lineup of men on the paper bills has been unchanged since 1929, all of them presidents except Founding Fathers Benjamin Franklin and Alexander Hamilton as well as Salmon P. Chase, a former secretary of the treasury who was on the discontinued $10,000 bill. (Martha Washington had been on a $1 silver certificate in the late 19th century.)

“We want this to come from the people as a mandate to the president and the secretary of the treasury so we can look to a brighter future,” Ortiz Howard says. “To a future that reflects our values today.”

This story was based on an interview for PRI's radio show The Takeaway. A previous version of this story did not include Hamilton, who graces the $10 bill.