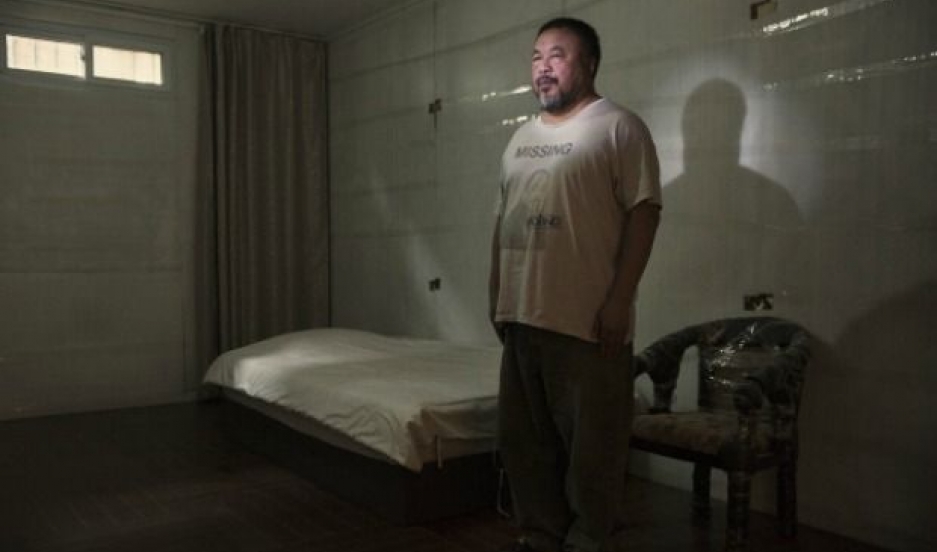 Artist Ai Weiwei stands in an exact replica of the cell where he was detained by the Chinese government for roughly three months in 2011.

Hollywood movie studios make no secret of their desire to hit it big in China, where box office revenue topped that in US for the first time last month. But could that lead to self-censorship from directors and writers trying to avoid the ire of the Chinese government?  One director says that’s already the case.

“Everyone at this point understands that working in China and getting Chinese money involves many approvals, so I think that that's something that's already happening,” says Alison Klayman, director of “Ai Weiwei: Never Sorry," the award-winning documentary on the Chinese artist named in the title.

But understanding what flies and what doesn’t in China is no simple matter, she says: "I think everybody is trying to crack the code, but it's just not that simple.”

Ai's recent history is a good example of just how confusing and contradictory the Chinese state can be when it comes to regulating art. Ai, a fierce critic of human rights abuses and corruption in China, was arrested on tax evasion charges in 2011. He was held in solitary confinement for three months before being released after international protests.

Ai has been told he's under investigation for a slew of other crimes, including bigamy and pornography, but the government hasn’t given any indication if it will pursue charges. Initially barred from leaving Beijing, he can now travel throughout China but cannot leave the country — authorities have seized his passport.

"He is still unable to leave the country. But at the same time, he's had huge artistic output in the last few years," Kayman says. "He's had a solo show at Alcatraz. Whatever the vision of how lenient or how strict it is, if you think it's just a simple answer, that's never the case.”

That hasn’t stopped companies from testing the waters. Sohu, a Chinese online streaming portal, plans to release a Mandarin version of Saturday Night Live in late 2015 or eary 2016. It remains to be seen how they'll deal with the kind of political and lowbrow humor SNL is known for.

“How far do they want to push it? Is it going to be like they're already going to create something that they know is within the lines, or that they're pretty sure is within the lines so that you don't have to tangle with your censor?” Klayman wonders “Or are you going to be constantly pushing those lines and then forcing there to be a push back?”

Either way, there's no doubt American movie studios will continue trying to answer those same questions. But at this point, Klayman believes it’s hard to guess exactly what that will mean.

“I don't think that there's an overwhelming feeling that things are more open," she says. "I think the whole world is really anxious to interact with China in a cultural way and get their content into the country, so I think that generates a lot of news stories about what is happening. But the real answer is never that simple as, 'Oh, this is a step towards openness, or even that it's a step towards things are getting more closed.'”