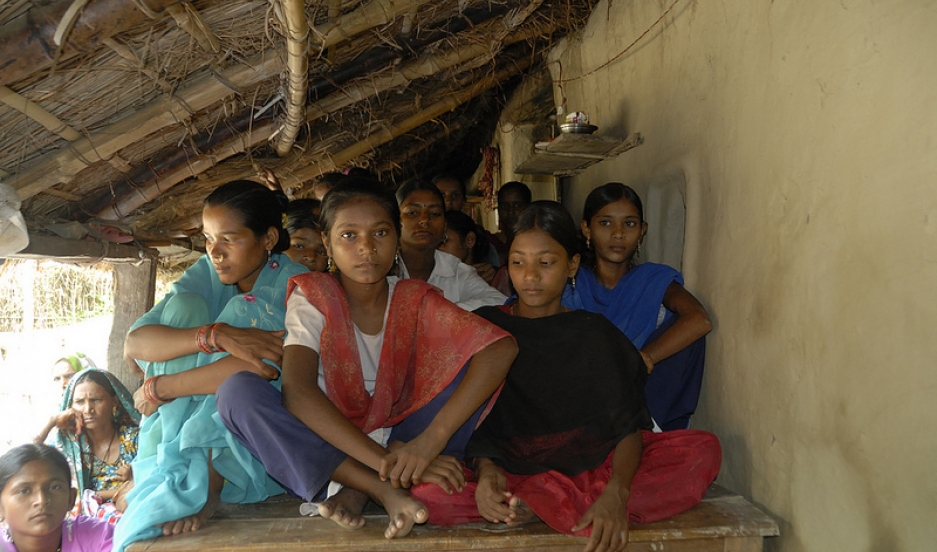 Students from a scholarship program introduced by the government of Nepal to encourage girls to complete their school education.

Do not push your children's lives into help by getting them married at their early age of schooling and fun. Are our daughters cheaper than the animals and cars that we give them as dowry? So let’s stop giving and asking for dowry. Otherwise, the fire called dowry will burn everyone from the Terai, the hills, and the Himalayas. It will not spare anyone.

This anti-dowry PSA (translated from Nepalese) is sponsored by the National Campaign to End Child Marriage in Nepal and is playing everywhere: On TV, on the radio and even in movie theaters and on buses, especially in the Terai region where child marriage is common. It’s part of a nationwide plan to end child marriage in Nepal that began last spring, in partnership with UNICEF.

Kiran Rupakhetee, who heads the child protection and development section in the Ministry of Women, Children and Social Welfare for Nepal, says the rates of child marriage are still high, but the trend is declining. He says his group is focusing on a few key areas: empowering and educating girls, informing the community about the dangers of early marriage and implementing legal reform.

In an essay for Global Voices, Saprina Panday explores worrying trends of child marriage in South Asia, but says there are some signs that things may be changing for the better.
Consider Panday's story

“This is a mindset. We need to change the mindset of the whole nation,” says Raj Kumar Mahato, who heads up Bhore, the organization behind the PSA.

He says the initiative they launched is putting the issue of child marriage in the public eye, and getting people to talk about it — something they’ve never done before.

“It will take time to end completely, but very positive signs have been observed,” he says.

In Pakistan, too, there’s been a push by the government to change child marriage laws. In 2013, authorities passed a law that raised the age of marriage to 18 for both boys and girls in the southeastern corner of the country. There’s a massive effort underway to expand this bill to other regions in Pakistan, and ultimately raise the age of marriage nationwide. But there are complications.

Get closer to the research

In Nepal, girls who marry before their 15th birthday have three or more children compared to women aged between 20 and 24, according to a recent UNICEF report.
Consider the data yourself

First, an economic one. Many families simply can’t afford to keep their daughters at home. Charmaine Shah of ActionAid International says some parents must marry off their daughters to shed the economic burden. Another issue, she says, is that many people don’t even know there is a child marriage law.

“It’s very important that a mass public awareness campaign is launched. Not only by the government, but also the civil society plays a very key role around that, so that at least the community knows and is aware of the issues around child marriages and how it affects the development as well as the health of children,” Charmaine says.

And there’s yet another obstacle — a religious one.

The 'Child Marriage and Dowry Eradication' campaign is just one of Bhore's national efforts. You can learn more about the organization, their other work, and the research that drives their efforts through their web site.
Find who made the PSA

“We, as civil society, through the legislatures, made a lot of efforts to put a law in table in Parliament,” says Rukhsana Shama, the program manager for Bedari, a group that’s been working against child marriage since 2008. “But what happened was that all the Islamic sections present in the Parliament, they were very much against it. The amendment was sent to the Council of Islamic Ideology, and since then it is pending there, and the law was lapsed.”

Some interpretations of Islamic texts dictate that girls should be married off at puberty. And while advocates are hopeful that this tradition can be adapted to make life better for girls, Charmaine Shah says this will never happen without the support of local religious leaders.

“They have a huge influence over the mindset of the people and how they think, especially for the population that is not very literate,” she says. “A huge promotion needs to be done in terms of getting them on our side and helping them push this agenda forward.”