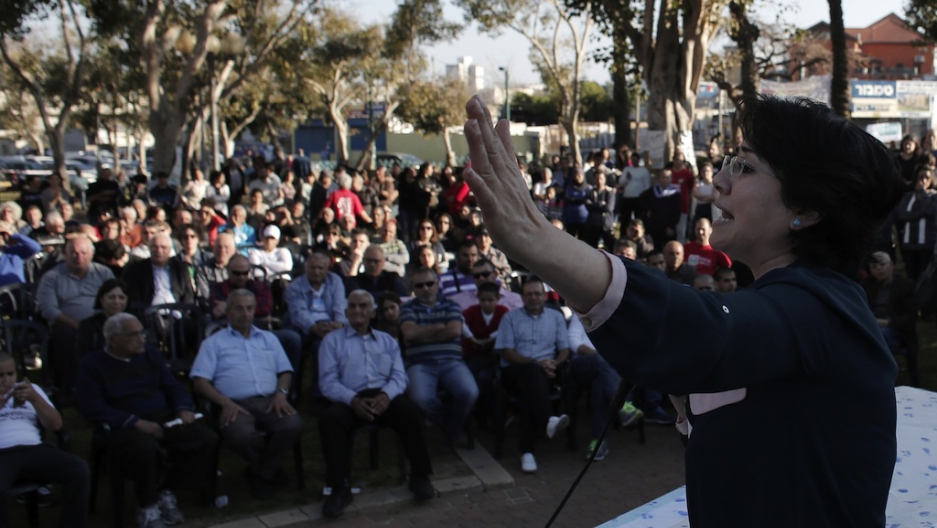 Israeli-Arab parliamentarian Haneen Zuabi speaks during a campaign meeting ahead of the Israeli general election on March 14, 2015 in the Jaffa district of Tel Aviv. Zuabi holds the seventh slot on the Joint Arab List, a united slate which includes representatives from across the political spectrum, from communists to Islamists.
Credit: Ahmad Gharabli
Share

TEL AVIV, Israel and RAMALLAH, West Bank — When Israel declared independence in 1948, many Palestinians still lived within the borders of the new state.

While large numbers were forcibly removed in the turmoil that followed, even as Israel's borders expanded, Palestinians still make up 20 percent of Israel's population today. And yet, Arab parties have never held serious political power.

That may be about to change.

A measure agreed to in December by Israel’s right-wing Foreign Minister Avigdor Lieberman and Prime Minister Benjamin Netanyahu raised the threshold required for a party to gain a seat in parliament from 2 percent of the vote to 3.25 percent. Critics accused the minister, who has a history of launching anti-Arab initiatives — most recently he called for the beheading of Israeli Arabs not loyal to the state of Israel — of trying to make it more difficult for the many smaller Arab parties to gain seats.

If that was the intention, the new rule has actually had the opposite effect, causing them to unite for the first time ever.

Now, as Israelis go to the polls, a new coalition of small Arab parties is slated to become the third or fourth largest party in the Knesset.

The Joint List, founded in January, brings together several Arab parties as well as the Arab-Jewish communist party.

More from GlobalPost: Why Israelis are falling out of love with Benjamin Netanyahu

“We can thank Lieberman who finally caused all the Arab parties to unite,” says Manar Barghouti, a 31-year-old Palestinian-Israeli from Nazareth, during a visit to Ramallah, in the West Bank.

Some Israeli Arabs have long chosen to boycott the Knesset, Israel's parliament, as a rejection of Israeli rule in historic Palestine. Others say they didn't see the point of voting since the Arab parties were so small and had so little clout. Now some voters are feeling an unusual sensation: optimism.

“Arabs are voting and the right wing parties are actually afraid of that,” said Abdel Karim Barghouti, Manar’s husband. He plans to drive members of his community to the polls on election day.

Members of the Joint List include Hadash, the Jewish-Arab communist party; Ta’al and Balad, two Arab nationalist parties; and Ra’am, an Islamist group whose support comes mainly from southern Israel.

“There’s a change in the relationship between the state and us,” says Hanaa Ammoury, political activist and member of a joint Arab-Jewish social movement called Tarabut.

“Sometimes the best things happen when you have no other choice and then you discover whole new options.”

For the first time the media is also paying attention to an Arab party. The Joint List has been  allotted TV screen time and sought out for interviews.

A study conducted by the Abraham Fund, a nonprofit geared toward coexistence between Arabs and Jews, says the Joint List's candidacy could raise voter turnout among Israeli-Arabs by about ten percent.

“We expect this unity to convince more people to believe that something is possible, to give them hope, to give them space to be a little optimistic that we can change something,” says Ammoury.

The Joint List platform focuses on long-held demands of Israeli Arabs, including a resolution to the Israeli-Palestinian conflict through a two-state solution with Jerusalem as the Palestinian capital, and resolution of Palestinian refugee status based on their UN-mandated right of return.

More from GlobalPost: What do Israeli voters say about Gaza? Not a lot

The List also calls for the removal of all West Bank settlements and the separation wall.

The party also calls for social equality and an end to institutional racism against Israeli Arabs.

Less high-profile commitments include fighting for workers’ rights and against poverty, preserving the status of the Arabic language and eradicating all nuclear weapons, including Israel’s — which it does not admit to having — from the Middle East.

While the List is not actively reaching out to non-Arab Israelis, its supporters say the party is for all Israelis who are poor and victims of racism, such as non-Ashkenazi Jews and Israelis of Ethiopian descent.

“We oppose the Arab vs. Jew and Jew vs. Arab approach. Our Knesset list, which has Jews and Arabs, is not against Israeli society, it fights for Israeli society to become [more] democratic, equal, [a society that] pursues peace,” said the head of the List, Ayman Odeh, at a press conference in January.

But while the list members are united for the moment, among them are Islamists and communists and nationalists whose unity of vision after the elections may not hold.

The List, of course, will be far more powerful united than divided.

“It’s much easier to be cohesive in the opposition than in government and on the kinds of issues they will be advocating, such as equal opportunities and access for the Arab minority and the Palestinian question in the West Bank and Gaza,” says Khaled Elgindy, a fellow at the Center for Middle East Policy at the Brookings Institution.

Party members have said they will not join any coalition that forms, either left or right — but that depending on the outcome of the election they’ll consider supporting the left from outside a coalition, in exchange for some of their demands being met.

There is some precedent for this. Yitzhak Rabin’s government in the 1990’s was a small coalition that depended on the support of a few outside Arab members in the Knesset. This was the government that oversaw the Oslo Accords.

Previously, Palestinians in Israel did not seriously entertain the idea of participating in Israeli elections. Now, engaging in Israeli politics is seen as a new mechanism for asserting Palestinian rights.

“Attitudes are changing among Arabs in Israel in that they are more prepared to engage in politics as a matter of survival,” says Elgindy. “There’s an assertion of, well, you know what, this is our home too.”