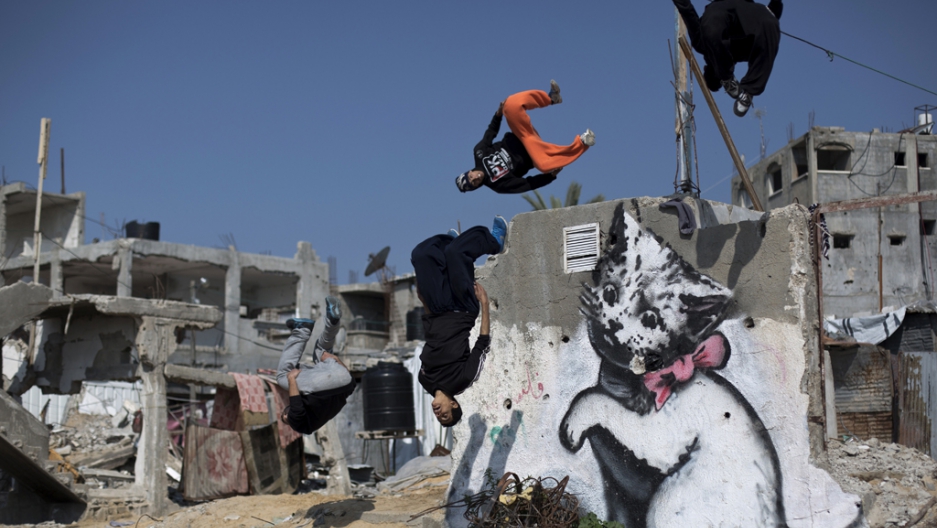 Palestinian youths play near a mural said to have been painted by British street artist Banksy, on the remains of a house that was destroyed during the 50-day war between Israel and Hamas militants in the summer of 2014, in the Gaza Strip town of Beit Hanun on March 13, 2015.
Credit: MOHAMMED ABED
Share

But while media has made much of the fact that Prime Minister Benjamin Netanyahu's Likud party is behind in the polls, one thing you don't hear much about is the 51-day war last summer, which left more than 2,100 Gazans dead.

The war sparked an international outcry as the death toll rose and rose. Meanwhile, as Hamas and other armed groups in Gaza launched rockets at Israel, domestic support for the campaign grew ever stronger.

Seven months later, large swathes of the Gaza Strip still look as though an earthquake hit days before.

Yet across the border in Israel, with election campaigns in full swing, the war — Israel’s longest and by far its most violent with Gaza — is hardly mentioned.

Candidates at times use Gaza to snipe at one another and impugn one another’s security records. The right frequently implies that if the left-wing Zionist Union — a fusion of Israel's once-dominant Labour party with the centrist HaTnuah led by Tzipi Livni — comes to power, they will be soft on Gaza, despite Livni’s hawkish record on the issue.

“If they are elected, who will take care of Hamas and the Islamic State?” said Netanyahu at a meeting with his Likud party in January.

But for normal Israelis, the situation in Gaza seems far off.

“Nobody cares," said Erez Lewin, 53. “Most of the people in Israel feel like we can’t change anything in Gaza and we just have to live with it. Not everything has a solution.

Even for those who can picture a solution to the peace process, Gaza can be out of sight, out of mind.

Andy Kohlenberg, who works in publishing and moved from the US to Israel in the 1980s, identified peace with the Palestinians as his top voting priority. But for him, Gaza has nothing to do with an eventual solution to the conflict.

Since Israel withdrew from the territory in 2005, some Israelis suggest that Gaza is no longer Israel’s problem.

“Gaza is already out,” he says, “ask the president of Egypt. I don’t think it’s Israel’s responsibility,” he added, before reminiscing about a hotel he used to stay at when the Gaza Strip was under Israeli control. “I’ll never be able to go back."

However, since Islamist group was democratically elected and then seized full control by force in 2007, Israel has enforced a heavy land, air and sea blockade on the territory. Leaving has become extremely difficult for Gazans, particularly since the border with Egypt is mostly sealed. Everyday items as well as construction materials, crucial now for rebuilding, are severely restricted and rarely come in illegally anymore as Egypt has cracked down on an intricate network of tunnels connecting the two countries.

Others say this summer’s offensive did not go far enough.

“It was not hard enough,” says Eran Bayajo, 27, “because now Hamas is building the tunnels again. We did nothing after all. You don’t want them to have the power to hurt you.”

Voters across the political spectrum say they have no choice regarding Israel’s policies in Gaza.

On the left, many are more concerned about domestic social issues than what happens on the other side of the fence.

Shirah Roth, 33, has two jobs: she works as a musician and pays the rent by working in a clothing boutique during the day. She was raised in the south of Israel where rockets launched from Gaza are more likely to land, and used to before the US-bought Iron Dome system went into effect.

She identifies as left and plans to vote for the Joint List, an alliance of four Arab parties that was formed in the leadup to this election.

“I would like the Arabs to be a part of the conversation,” Roth says.

But even among her friends, Gaza doesn't come up when they talk politics, she says.

“The only thing that really concerns them is how to develop themselves and stay here. How can I stay alive and not give up on myself?”

Meanwhile aid workers in Gaza all say the same thing: Gazans too must be given reasons not to give up on themselves; they have to have something to lose.

The role of wars in Gaza in Israeli elections is difficult to predict. Despite widespread condemnation from the international community, Bibi, as Netanyahu is called in Israel, seems to have avoided any major fallout at home.

But since the underlying issues between the two have yet to be resolved, many in Israel and in Gaza say that another war is likely on the horizon, a prospect that frightens both sides.

Meanwhile, in Gaza where only 5 percent of the pledged $5.4 billion in aid has been disbursed, chronic homelessness and PTSD keep memories of the offensive very much alive.

For one group in Israel, too, the Gaza offensive feels closer to home.

"It was like always when Israel bombs Gaza," says Hanaa Ammoury, political activist and member of a joint Arab-Jewish social movement called Tarabut.

"We are really sad, we are really frustrated. We demonstrated daily and weekly and used all the civil tools we have ... to at least show that there is a voice objecting to the war inside Israel."

Editor's note: This article was amended to clarify that while the delivery of essential construction materials has been severely restricted, some materials have been allowed to enter Gaza.