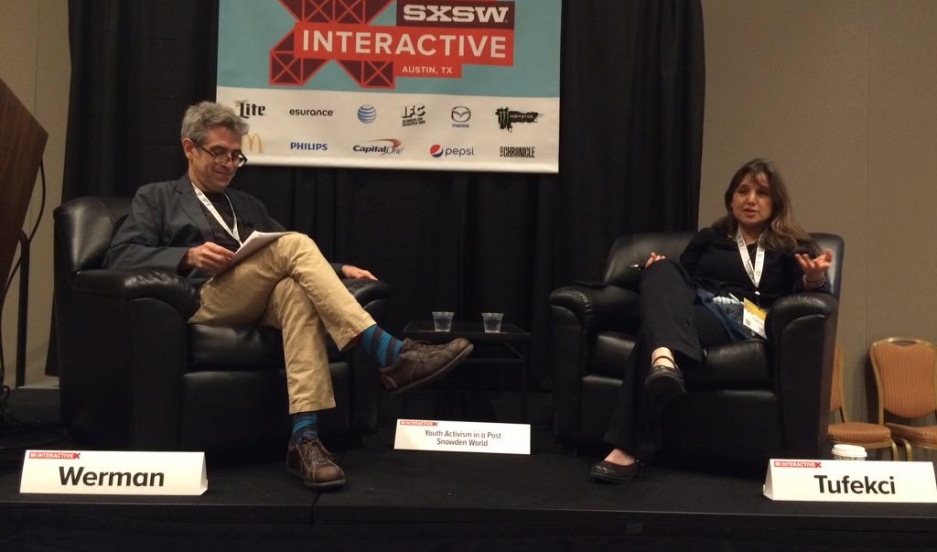 On Sunday at the South by Southwest festival in Austin, Texas, Zeynep Tufekci sat down with The World's host Marco Werman.

On Sunday at SXSW, Marco Werman and Zeynep Tufekci, a professor at University of North Carolina-Chapel Hill who studies the intersection of technology and society, sat down for a conversation about the global state of activism. Here’s what we learned.

Street activism versus digital activism is a fake debate. People knock social media as “slacktivism,” but there is nothing magical about street protests, either, says Tufekci. A combination of street and digital protesting allows activists to find each other, which is the first step in visibility.  “I believe that social media activism deserves a huge bunch of the credit along with the street activism,” she adds.

Social media can help amplify a protest in ways never before seen... The protests in Ferguson caught fire because of social media, Tufekci says. And the interest and attrition came almost exclusively from digital and social media: One live stream from Ferguson had 45,000 viewers, which is 10 percent of CNN’s total nightly viewers.

… but there is no replacing the strong bonds forged during street protests. The civil rights movement was successful in large part because the movement’s leaders had worked together under pressure for a decade, a collaboration that "gives you resilience to deal with governments coming at you,” Tufekci says.

Visibility in large numbers doesn’t create some magical tool for change.  Those that believe they’re successful because their movement is trending on Twitter are doing it wrong, she adds. Social media can help activists find each other — but trending issues must move beyond connections to make a difference.

Social networks should have more responsibility to amplify the right things. Like it or not, social media companies are the new gatekeepers with their algorithms, Tufekci says. Because Twitter’s trending topics favor spikes, she explained, the gradual rise of social media conversation around Ferguson didn’t catch the platform’s attention. And on Facebook, it’s newsfeed algorithm was filtering out local news in favor of the ALS Ice bucket challenge. The reliance on quick spikes emphasizes sensational stories over those with a slow build, “the same way that the news media covers death of a homeless man, not chronic homelessness.”

The new goal of political activism should be “no representation without conversation.” It’s a new mantra Tufekci learned from the protests in Argentina. Because today’s protests are leaderless (which can lead to disorganization and limited impact), the advantage is that it can’t be cut off at its head, says Tufekci. The goal for these groups is not radical change, but to open a conversation with the government about the possibility for change.

Digital activism is still in its infancy and has had limited impact — but new tools are being developed to make it more effective. The one thing that the civil rights movement did brilliantly, Tufekci says, was making the decision to tactically shift when needed. Today’s protests have not been able to do the same. But she is seeing progress in that area: both Lumio (Spain) and Democracy OS (Argentina) are online decision-making tools meant to improve communication and organization within digital spaces.

On privacy and digital surveillance: The thing that we should be protesting is government asymmetry  — governments know everything about us while what they’re doing is opaque. If you’re an activist, Tufekci says, total secrecy will never be possible (either online or offline), but personal information shouldn’t be equal fodder. “We need to update our nightmares,” she adds. “It’s not being dragged out of your home. It’s the government using data against you.”