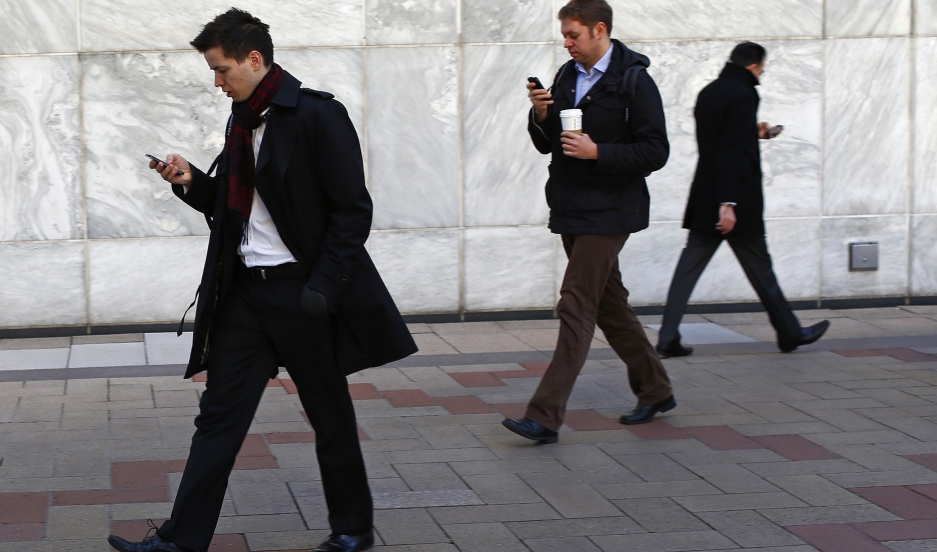 Workers look at their phones while walking at the Canary Wharf business district in London February 26, 2014.

Every year at the “International Conference on Masculinities,” hundreds of people from across the globe get together to discuss what it means to be a man.

But contrary to what you might think, this isn't a gathering of men's rights activists. Rather, it's an academic conference hosted by universities and other organizations that are broadly working to improve gender equality by researching and engaging men.

That means that the presenters and attendees aren't militant men trying to eradicate feminism. Instead, they're academics and activists, men and women, sharing their research on how men are being men in today's world — and how the current manifestations of masculinity affect both men and women.

Adam Gabbatt, a writer for The Guardian US, attended this year's conference. “It was a real eye opener,” he says. “I found out that, in my eyes, masculinity is in crisis.”

Not all men are the strong stoic type, like Charles Bronson or hyper masculine like Arnold Schwarzenegger. Yet, while at the conference, Gabbatt said he learned that even men who are trying to break free of stereotypical gender roles and ideas of masculinity are having difficulties.

“The point people were trying to make at the conference is even people who try to escape these traditional masculine things — by liking My Little Pony or by being self-described nerds, are still subject to the same kind of hegemonic masculinity or stereotypical ideas of manhood — they are still bound by that,” he says.

In many cases, the men in attendance at the conference view themselves as masculine dissidents, attempting to escape from macho prisons.

“They’re not escaping at all, sadly,” says Gabbatt. “These [self-described] nerds in particular were taking part in Dagorhir, in which they dress up as characters similar to ‘Lord of The Rings;’ they have foam swords and run around fields and stuff like that. But it was found that they’re still, basically, in the way they interact with each other and women in particular, they’re still just the same as a guy down at the pub ordering seven pints of Coors.”

The event wasn’t filled with men, though. Gabbatt spoke to some women at the conference, many of whom were concerned that men often appear to be locked into gender roles.

“People were doing research on men and presenting it,” says Gabbatt of the speakers at the conference. “I spoke to some of the women afterwards and they said, ‘Is this really what’s happening with men? It sounds awful.’ They found out that even ‘nerds’ or those that like My Little Pony still won’t talk to other men about their feelings or even close friends.”

The researchers, activists and psychology professionals at the conference (both genders included) feel that something needs to be done to allow men to break free of these suffocating stereotypes.

“One of the ways they’re doing [that] is by exploring different ways to get men to talk about themselves,” says Gabbatt. “One of the most interesting things I’ve heard was someone who’s hosting friendship labs, where he gets some of the men together who can’t express themselves and has them talk amongst each other. He sat there as a therapist guiding them on how to express their feelings and interact with friends.”