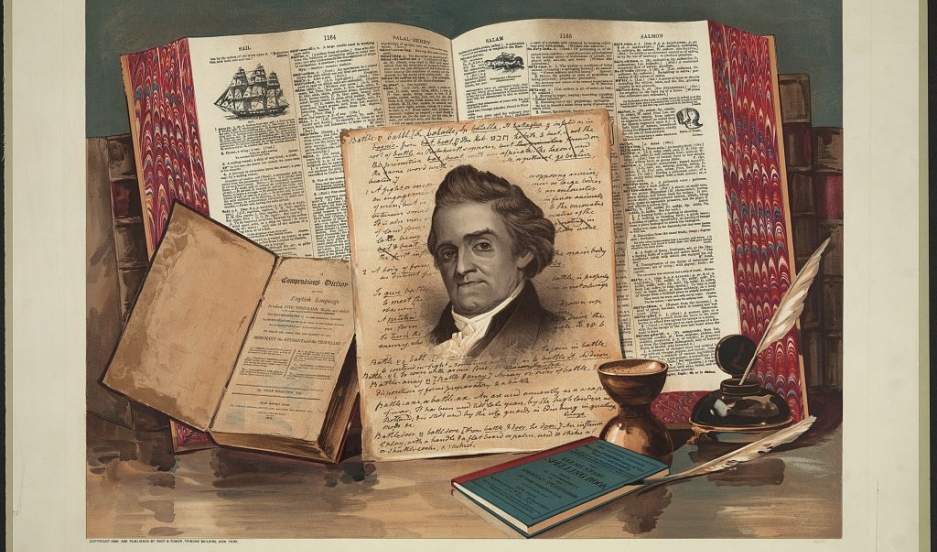 A late-19th century print that called Noah Webster the "Schoolmaster of the Republic."

Webster’s Dictionary defines "forgotten man" as “a person or category of persons that receives less attention than is merited.” It’s a pretty good definition, but they could have just put in a picture of their founder, Noah Webster, instead.

Webster was once a major figure in the American pantheon, right up there alongside Washington and Franklin. But in our time, almost nobody remembers his name.

So here are four things to remember about Noah Webster, courtesy of Joshua Kendall, author of "The Forgotten Founding Father: Noah Webster's Obsession and the Creation of an American Culture."

“Webster came to prominence because of Webster’s Speller, which came out in 1783. Over the next century, that book would sell a staggering 100 million copies. That book taught five generations of Americans how to read. So every American in the 1800s knew of Webster and connected him to their own childhood.”

His ideas influenced the Constitution:

“Webster was a policy wonk, and the Speller gave him a national platform ... so he’s writing pamphlets about America’s political makeup. And in 1785, when we’re under the Articles of Confederation, he writes an essay saying: 'Things aren’t quite working out, we need a stronger central government.' And Webster’s a very enterprising sort, so he decides to go to the top, and heads down to Mt. Vernon and shows Mr. Washington this idea. Washington was a great delegator and gave his pamphlet to Madison, and Madison used some of his ideas in formulating the Constitution.”

“We broke off from England in the 1780s, and Webster was the first guy to say we need to have our own cultural identity. Previous to his Speller, American kids had used British spellers. Webster wanted to get this first generation of American kids to think of themselves as Americans. That’s the strand of his work, from the Speller through the Dictionary, is getting us to to think of us as Americans. He really developed American English.”

Part of the reason he’s forgotten is because he was so unlikeable:

“Noah Webster was very crotchety. He kind of had a personality problem. Ambrose Bierce, the late 19th century satirist, defined Hell as ‘the eternal resting place of Noah Webster.’”