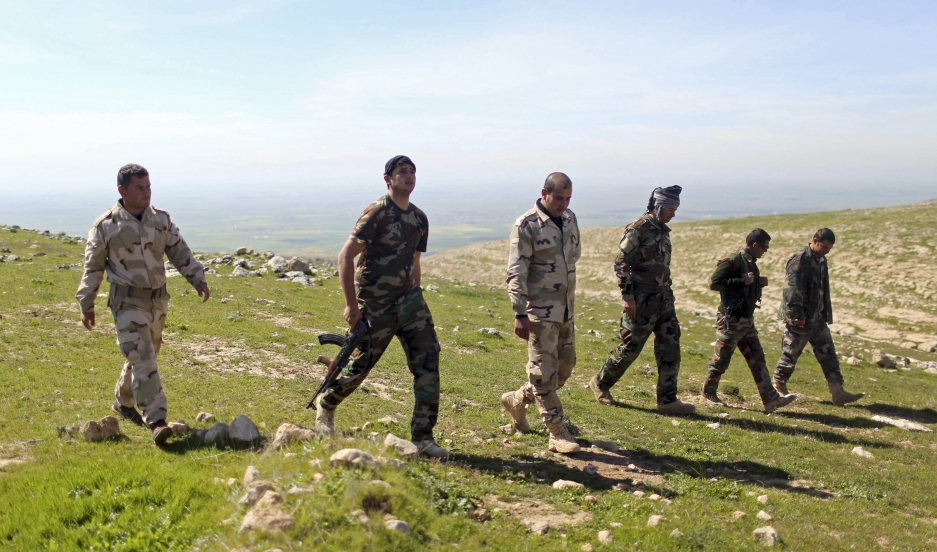 Members of the Kurdish Peshmerga forces walk near their security point on Bashiqa mountain, overlooking ISIS-held territories of Mosul, March 7, 2015.

Iraqi forces have made substantial inroads with the self-proclaimed Islamic State in Tikrit. While the United States has stayed on the sidelines of this particular battle, a number of American veterans have volunteered for the cause, fighting with the Kurdish peshmerga against ISIS in Syria.

Former US Marine Sgt. Patrick Maxwell was one of them. Maxwell deployed to Anbar Province with his Marine unit in 2006. He left the military with an honorable discharge five years later, but he couldn't stay away from the fighting.

Last year, he returned to Iraq, this time as a volunteer with the Kurdish peshmerga forces. In an interview with The New York Times, Maxwell explained, "When I'm enlisted, I'm there to serve my country, protect my country, obey the orders of the officers appointed over me."

He continued: "As a private citizen, I'm going to have an adventure, essentially, and that's my own business."

While the US doesn't have official numbers on American veteran volunteers fighting ISIS, a Y.P.G. Kurdish militia spokesman told The New York Times that their forces include more than 100 American citizens.

Matthew VanDyke knows these veterans well. VanDyke has spent most of his adult life in the Middle East and North Africa, fighting with Libyan rebel forces against Muammar Qaddafi and filming a documentary on the Syrian Civil War. He's also the founder of Sons of Liberty International, a security organization that trains anti-ISIS fighters and recruits American veterans to the cause.

“[These veterans] once did something that they view as significant with the US military,” says VanDyke. “Now they’ve come back and they’re doing a job that they consider to be menial labor or something that they’re not happy with. They want a sense or feeling of belonging or importance again.”

In addition to having a sense of purpose, VanDyke says that veterans are joining forces with the peshmerga because they view ISIS an extension of al-Qaeda.

“They see it as the undoing of years of their own [work] for the US military in Iraq,” he says. “You spent years [fighting], saw comrades die, and perhaps suffered injuries yourself. And then you see, in a matter of a month or so, the sweep of ISIS through Iraq. It really must get to these people.”

The US government has put pressure on Kurdish forces to expel American veterans from their ranks, and now Kurdish forces have said that they are no longer accepting foreign volunteers. Beyond potentially complicating American foreign policy if they are caught, it’s unclear what kind of impact these veterans might have in the fight against ISIS.

“When you’re trained with the military, you’re trained to function as a unit with other trained individuals,” says VanDyke. “When you go there as a lone wolf who is well trained — to work alongside men who are not particularly well-trained — your impact on the battlefield is extremely limited.”