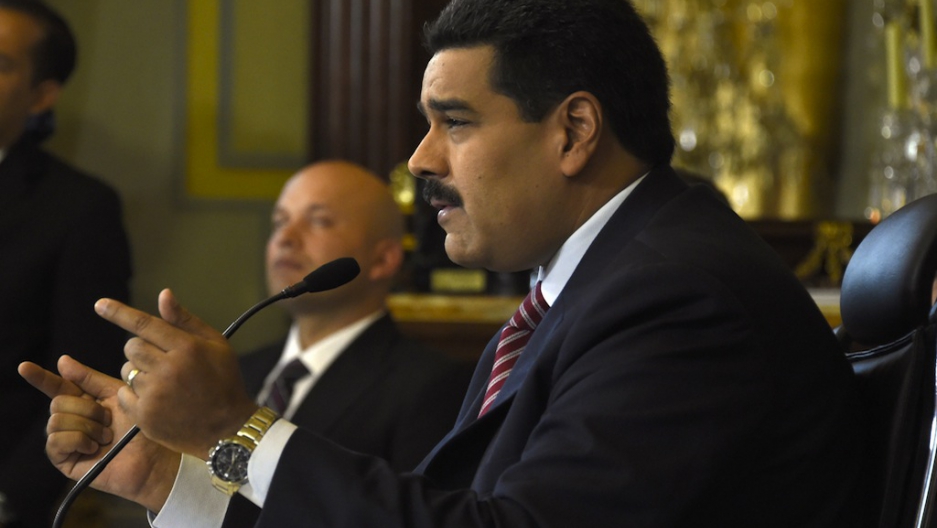 LIMA, Peru — The Obama administration has ratcheted up pressure on President Nicolas Maduro’s beleaguered government, declaring this week that Venezuela poses a “national security threat” to the United States.

That move paves the way for a formal sanctions program against the oil-rich but dangerously divided South American nation, in the same process previously used to put the heat on Iran and Syria.

The crackdown has included locking up opposition leaders, silencing independent media, using rubber bullets to quell even peaceful protests, and banning desperate shoppers from waiting in overnight lines at supermarkets.

The new US measures, however, could hardly contrast more with the stance of most Latin American governments, which have largely avoided public criticism of Caracas.

And that’s despite the growing risk of a bloodbath on their doorstep should Venezuela not pull out of its downward spiral.

“Latin America’s response has been tragic, basically because there has been no response, at least not from the governments,” said Jorge Castañeda, a former Mexican foreign minister, in a phone interview.

“They have simply failed to live up to their commitments under the Pact of San Jose and the Inter-American Democratic Charter,” he added, referring to two international treaties that require Latin American governments to act when democracy in a regional neighbor is threatened.

More from GlobalPost: A timeline of Venezuela's slide toward disaster

The Peruvian Nobel winner added: “How many more dead and prisons full of political prisoners will be needed for the OAS [Organization of American States] and the democratic governments of Latin America to abandon their silence and take action?”

The unrest has been fueled by a catastrophic collapse in the standard of living for many Venezuelans over the last couple of years.

Indeed, last weekend a delegation from UNASUR (the Union of South American Nations), visited Venezuela to promote “peaceful, democratic and sovereign ways out” of the crisis.

Comprised of the current foreign ministers of Colombia, Ecuador and Brazil, the delegation was led by former Colombian president Ernesto Samper, now head of UNASUR.

Yet the delegation’s conciliatory stance toward the Maduro administration may only have confirmed the perception that Latin American governments are unwilling to confront Venezuela.

To the fury of the opposition, Samper failed to condemn the government’s abuses, as human rights groups had called on him to do.

He also claimed that the Venezuelan judiciary was independent. And Samper talked with opposition leaders individually rather than holding a meeting with the MUD, the umbrella group of more than 30 opposition parties.

Yet many feel that taking a strident stand against Maduro would only backfire.

That’s because the Venezuelan president — the late Hugo Chavez’s handpicked successor — revels in battling supposed foreign threats, which allows him to shift attention away from Venezuela’s economic woes.

Indeed, Maduro responded to this week’s news from Washington with typical bluster. He immediately announced he was seeking more decree powers to tackle “imperialist arrogance.” And for good measure, he promoted one of the sanctioned individuals, security chief Gustavo Gonzalez, to interior minister.

President Juan Manuel Santos, the center-right leader of Colombia, which neighbors Venezuela, has gone as close as any current Latin American head of state to questioning the Maduro administration.

Yet he relies on Venezuela’s backing for Colombia’s peace talks with Marxist rebels aimed at ending a half-century conflict that has cost more than 200,000 lives. That includes allowing the rebel leaders safe passage to Cuba, where the talks are being hosted.

Brazil, meanwhile, has major economic interests in Venezuela, including multi-billion dollar construction contracts, that it does not want to jeopardize. President Dilma Rousseff also has a lingering ideological sympathy with the Venezuelan government, even if she remains scrupulously democratic at home.

And the ruling party of the other regional giant, Mexico, has a long standing policy of staying well out of other countries’ alleged authoritarian abuses.

Castañeda, who as foreign minister a decade ago briefly reversed Mexico’s traditional stance of refusing to condemn Cuba’s lack of democracy, said: “No PRI (the Spanish initials of the Institutional Revolutionary Party) government will comment on the internal affairs of another country because they don’t want to become vulnerable to other nations looking at their human rights record.”

Cynthia Arnson, who heads the Latin America program at the Wilson Center, a Washington DC think tank, added: “Certain governments in the region would counter that they are playing a role behind the scenes, to get people out of jail, promote dialogue, and not feed the fire.”

But Sandra Borda, a politics professor at Bogota’s University of the Andes, noted that the silence is now also coming from traditional Chavista allies like Bolivia and Ecuador —which previously strongly backed Maduro — as the turmoil in Venezuela spins out of his control.

“The situation is so volatile and unpredictable that no one wants to get involved and end up backing the wrong side,” Borda said.

“I’m not sure that any declarations condemning the situation help. The Venezuelan government is determined to hang on to power by any means at its disposal and is unlikely to heed them.”

In other words, the future of troubled Venezuela, US sanctions notwithstanding, will likely have to be decided by Venezuelans.