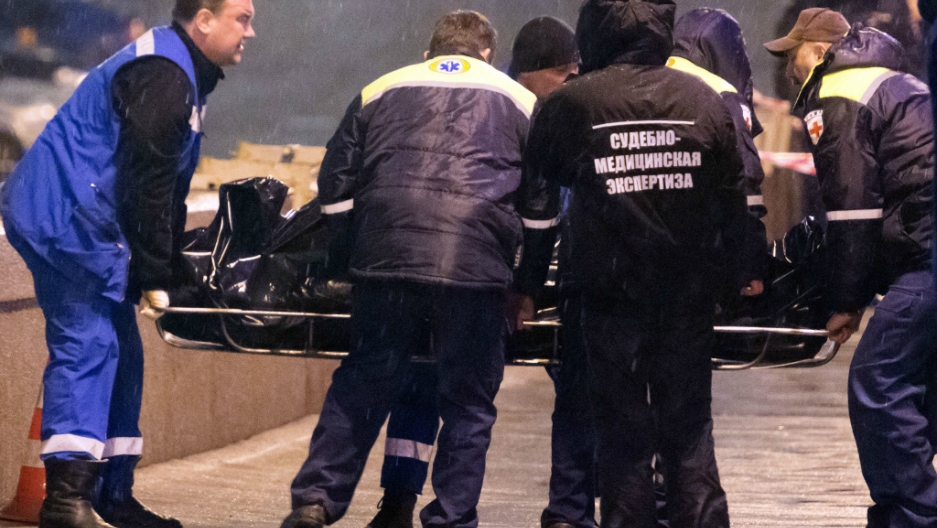 Medics lift the body of Russian opposition leader Boris Nemtsov on Moskvoretsky bridge near St. Basil cathedral in central Moscow on February 28, 2015. A Russian opposition leader and fierce critic of President Vladmir Putin, Nemtsov was shot dead by an unidentified attacker who fired multiple rounds at the politician as he was walking.
Credit: DMITRY SEREBRYAKOV
Share

TUCSON, Arizona — The death of Boris Nemtsov is all too reminiscent of a time in Soviet history that most Russians are glad to have left behind. And yet we are left wondering whether the crimes of Russia’s past were only prologue to those of the present.

Nemtsov, former governor of Nizhny-Novgorod Oblast, former deputy prime minister under President Boris Yeltsin and fierce critic of Vladimir Putin and the war in Ukraine, was gunned down within sight of the Kremlin.

Two suspects, Anzor Gubashev and Zaur Dadayev, from Chechnya, a volatile region in the north Caucasus have been detained in connection with the murder. Nothing more is known of them.

It brings to mind the murder of popular Leningrad party boss, Sergei Kirov, in 1934. Kirov was a close comrade of Josef Stalin. The Soviet president quickly arrived to oversee the investigation of the crime. But, was Kirov an early victim of the purges under Stalin? His murder remains unsolved to this day.

The anti-war march that Nemtsov had organized became instead a gathering of mourners for the slain activist. Unofficial figures put the number of marchers at 50,000. And they turned out as well in other cities across Russia.

There was an eerie familiarity between the horrific death of Nemtsov in Moscow and the era of the Stalin purges. The difference was that Nemtsov was a bold critic of Putin, while in Stalin’s Russia, no one dared speak out.

The slightest hint of criticism of Stalin landed Soviet citizens in the infamous gulag or worse. People wrote for the desk drawer, so to speak, hoping that what they had to say would eventually be found and see the light of day. Some, like the Jewish writer Isaac Babel, practiced “the genre of silence.” He stopped writing in order to avoid government persecution. Ultimately even his silence didn’t save him. He was executed in 1940.

It was a time, as the poet Anna Akhmatova said, “When everyone spoke in whispers.”

Since Vladimir Putin took office in 2000, speaking one’s mind has become risky business, and yet no one has flinched.

This was supposed to be the new Russia, the one founded in 1991 on the ashes of the Communist regime. This was to be the new state, one in which no one would be dragged off in the middle of the night or, worse still, killed while taking a late night stroll on a bridge within sight of the Kremlin — the fate that befell Nemtsov.

In July 2004, Paul Klebnikov, first editor of the Russian edition of Forbes magazine, was murdered, shot from a passing car. Klebnikov had written widely on the corruption of oligarchs in Russia.

The last issue of Forbes published before his death contained an expose on Russia’s 100 wealthiest. A Chechen, Kazbek Dukuzov, was arrested and charged with Klebnikov’s murder. Then, despite all evidence to the contrary, a jury acquitted him.

To this day, the person who gave the order for the murder has not been identified despite Putin’s assurance to Klebnikov’s family that he would personally oversee the case. The Klebnikov case is no longer being actively investigated.

Many feared that Klebnikov’s death would signal an end to investigative journalism in Russia. They were wrong.

Nemtsov’s death recalls that of Anna Politovskaya, the brave journalist and outspoken critic of Putin who wrote scathing critiques of Russia’s handling of the war in Chechnya.

Only two years after the murder of Klebnikov, she was murdered in an elevator in her Moscow apartment building on her way home from grocery shopping. In July 2014, five men were sentenced to prison for her murder. It remains unclear who ordered the killings.

In both these high profile cases, the suspects were also from the Caucasus, and the masterminds behind the killings have never been found.

Has the demand for justice in Russia once again led Putin’s government to roll out the usual suspects, Chechens, whose demands for independence have been brutally rebuffed by the Russian government?

In 2009, Natalya Estemirova, journalist and member of Human Rights group Memorial, was abducted and killed on her way to work in Grozny, capital of Chechnya. Then-president Dmitry Medvedev, reacting to international outrage, promised her death would be investigated. Six years later, no one has been brought to justice.

Russia has long tolerated a culture of impunity, regardless of its changing political system. Tracing the origins of that impunity requires a journey deep into Russia’s pre-Soviet past as well as stops along the way in Stalin’s Russia.  Influences include a corrupt and dysfunctional court system and an increasing intolerance for dissenting voices, especially since Putin became president in 2000.

Given the appalling recent failure to bring people to justice, we may never know the degree to which he was complicit in the violence directed against dissenting voices in Russia. Many of Stalin’s crimes could not be traced directly back to him. But history has not absolved him from guilt.

Under Putin, raising one’s voice against the government carries considerable risk, including death.

Putin has committed himself to the investigation into Nemtsov’s death, vowing to take it under “personal control,” just as he promised Klebnikov’s family he would do the same. It was a failed promise.

Putin bears the ultimate responsibility and must shoulder the guilt for what is going on in Russia today. The country he heads is one in which crimes are committed with impunity and where those who live within its borders cannot expect to speak their minds and remain alive.

Adele Barker is a professor of Russian at the University of Arizona and a public voices fellow with The OpEd Project.