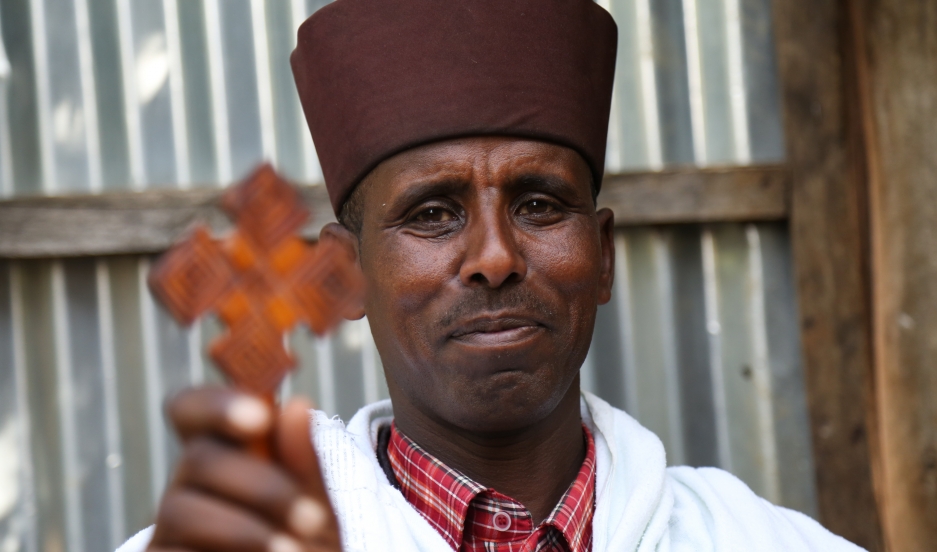 The Orthodox Church dominates life in Ethiopia, and its priests are some of the country’s most respected figures. So when priests take child brides, often age 15 or younger, it's not something that's questioned by the community. Rather, it's expected. Tradition dictates that a priest must marry a virgin.

“Before, the priests used to think that marrying a girl over 15 years old, after her menstruation starts, is a bad thing, it lowers her quality,” says Melak Birhan Ewenetu Yetemegne, the second top priest in his region, a rural area in southern Amhara in the cool Ethiopian highlands. His district includes 56 churches and more than 2,000 priests. And his experience with child marriage is personal. When he was 22, he married a girl who was only 9.

“She didn’t really understand she was married,” the 45-year-old says. “She considered me as a brother or father and until she was 15, she never understood that we were married.”

He says though sexually tempted by his new wife, he waited until she was 16 before consummating the marriage. He tells the story of his friend, also a young priest at the time, who was de-robed after injuring his 11-year-old bride with a traumatic fistula. Melak Birhan says he was careful not to make the same mistake.

“He was misguided by the tradition, rather than by the Bible. That was a bad story, while my tolerance is a good story,” he says.

The priest and his wife are still together today. In the years since their wedding, Melak Birhan has blessed countless child marriages. But about a year ago, the priest’s position on child marriage was challenged. A group called Finote Hiwot: End Child Marriage ran a workshop for the top priests in the district. Over five days, the priests were asked to reinterpret the Bible.

“Finote Hiwot only showed us what the Bible already said. They didn’t say, ‘You should do this or you should not do that,’ rather, they asked us to study the Bible and find our own meaning,” he says.

By workshopping the Bible, the priest and his peers realized their long-held traditions on marriage and virginity cloaked a more important teaching: that children should be protected. They came to the consensus that child marriage is harmful.

“And so there’s been mindset changes of understanding the scripture as it relates to ending child marriage,” says Sigurd Hanson, who leads the Finote Hiwot program in Ethiopia. “It’s so important to have preaching guidelines that come from the church and not from people like myself, not my colleagues, not from other organizations.”

Since the workshop, the priests have started holding monthly meetings where they share what they’ve learned and champion their new anti-child marriage message. Melak Birhan says there are penalties for priests who conduct underage weddings or marry young girls themselves. The priests also counsel parents, and children learn about the new rules at Sunday school.

According to Melak Birhan, about 250 child marriages have been prevented in the district. Another 26 marriages have gone ahead, though he suggests those were probably arranged before the workshop. The priest also says the virginity requirement isn’t what it used to be.

“Previously, a man would cause excessive bleeding when taking a girl’s virginity ... and if she didn’t bleed he’d beat her up. ... But these days people are becoming conscious — and it’s already becoming history,” he says.

Finote Hiwot's Hanson says this progress is encouraging, but his organization doesn’t want to roll out its religious intervention program across the region. Instead, he’d like to see the church take on that role itself in a grassroots, ground-up approach. But he says change also has to come from the top down.

“So the challenge here in Ethiopia is to go to the top-top. In other words, we’re confident that when the patriarch of the Ethiopian Orthodox Church stands up and proclaims ‘we must end child marriage’ at least that faith will end child marriage,” Hanson says.

That’s a proclamation he’s yet to make.