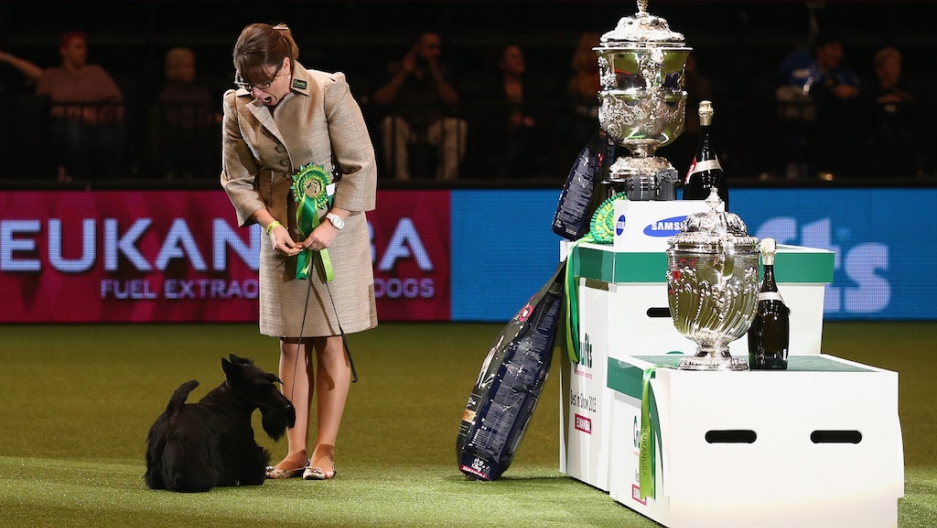 Handler Rebecca Cross with Knopa the Scottish Terrier, as they celebrate winning the Best in Show category of Crufts 2015. Some are calling for the win to be revoked amid allegations that cross handled Knopa too roughly.
Credit: Carl Court
Share

Multiple UK media outlets are reporting the unsourced claim that a shih tzu fell ill and died after returning from the Birmingham competition. If true, it would be the second death after Jagger, a prize-winning Irish setter, collapsed and died after returning home to Belgium Friday. Jagger’s owners claim that cubes of poisoned meat were found in the dog’s stomach upon autopsy.

The Kennel Club, Crufts’ organizer, had been close-lipped in recent days about the biggest scandal in the show’s history. On Wednesday evening they sent the following statement: "The Kennel Club has received no details about the Shi Tzu who has allegedly died and whose identity remains unknown and we can confirm that no Shi Tzus were seen by the show vet at Crufts. We cannot look into claims about which we have no direct information, which is why it is essential that people come forward with any concerns."

“We must make it absolutely clear that there is currently no evidence that any dog has been poisoned at Crufts,” the organization said in a statement on Monday, adding that only Jagger’s case has been directly reported to the Kennel Club.

The owners of two other show dogs have told media outlets that their Shetland sheepdogs fell ill at the event. A West Highland White terrier and an Afghan hound have also been reported sick, according to the Telegraph.

Mylee Thomas took her Shetland sheepdog to the veterinarian Friday after Myter Eye to Eye began vomiting at Crufts, after Thomas briefly stepped away from the animal to use the restroom. Thomas now believes her dog was poisoned as well.

“It clearly says in the vet's report that there was a suspect material that had been fed to her,” Thomas told NBC News. “She was given something. It was enough to take her out of the competition, but not enough to kill her, fortunately.”

Singin The Blues, another Sheltie, also fell sick at the event. The two dogs were top contenders in their category.

A vet investigating Jagger’s death publicly questioned the owners’ contention that he could only have eaten the poisoned meat at Crufts.

“I doubt it happened at Crufts. I think that is unlikely and I am surprised everyone is saying this is the case,” Patrick Jans told the Daily Mail. “It could have happened on their way back or even in the hours after they arrived back.”

Jagger’s co-owner Aleksandra Lauwers said she remained “convinced” that the dog ate the poison in England. ‘The CCTV from Crufts is being checked by someone we know,” she told the Daily Mail.

Meanwhile, in other dog show scandals, calls grew to strip Best in Show winner Knopa of her title after her owner, Rebecca Cross, was seen picking up the Scottish terrier by his tail to place him on the podium.

Two online petitions to have Cross' win revoked for the rough handling together drew more than 174,000 signatures as of Wednesday.

While the Kennel Club agrees "dogs should not be handled in this way," it is refusing to revoke the title so as not to deprive Knopa of his moment of glory.

“The judge’s primary focus is on the dogs themselves and we do not believe it would be fair to strip the dog of its Best in Show title because the dog was awarded this prize based on its own merits,” Kennel Club Secretary Caroline Kisko said.