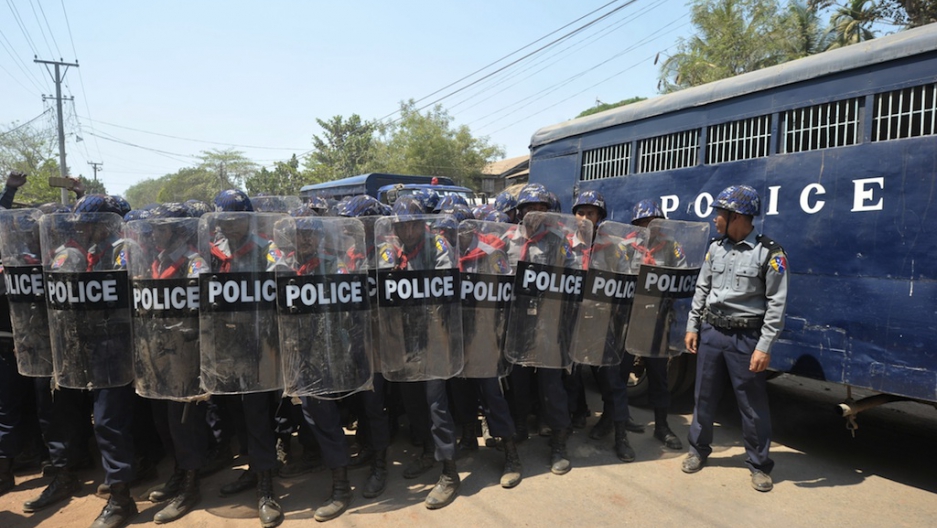 Myanmar riot police take position near a student protest march in Letpadan, some 80 miles north of Yangon on March 10, 2015.
Share

BANGKOK, Thailand — Bashing student protesters with clubs is the sort of nasty behavior Myanmar is supposed to be leaving behind.

But such violent scenes returned to the troubled nation this week when police used what seemed like rather unnecessary force to put down a peaceful protest calling for reform of the country’s education system.

Myanmar’s schools and universities haven’t changed much compared to four years ago, when the country first began to emerge from a dictatorship and transform itself into a freer and more open society (partly in the hopes of landing billions in aid from the United States and others). A feisty student-led movement has grown as a result. Growing impatient, the movement first took to the streets in November, demanding the military-dominated government get its act together.

The crackdown finally came on Tuesday. And it was a worrying throwback to Myanmar’s bad old days, when authorities beat and locked up anyone who dared to defy them.

Human Rights Watch said baton-swinging cops roughed up about 200 students, journalists and even Buddhist monks who had been camped in Letpadan, a small town about 85 miles north of Yangon. The students had been in the middle of a long march from the central city of Mandalay to the capital when police stopped them about a month ago. They had been stuck in the city ever since. A few days ago, it seemed the authorities might finally let them continue their march. But instead, police violently scattered the protesters. Some sought refuge in homes and temples, only to be dragged out by cops going door to door.

Letpadan — like Ferguson, Missouri in the United States — was once an anonymous town. But in a single day the little hamlet has turned infamous, a symbol of a government promise to allow peaceful dissent sadly broken. It could also represent a turning point for Myanmar. Here is what you need to know:

What do the students want?

Nothing radical. They’re demanding unrestricted student unions. They want lessons taught in the languages of ethnic minorities, which make up more than 30 percent of the population. And they want independent universities that aren’t under tight government control.

Myanmar’s education system is destitute. In the past two decades, the military has devoured the national budget, dropping only a few crumbs toward education. Schools are still so broke that parents in some regions bribe teachers with sacks of rice just to make them show up.

Student frustration with this broken system, which strangles their opportunities to climb out of poverty, has reached a boiling point.

Why are the police reacting so harshly?

Myanmar’s authorities are prone to siege mentality. For decades they’ve worried that dissent on the streets could upend their tight control of the country. They feared Aung San Suu Kyi, a woman who publicly defied their iron rule and called for democracy. (US President Barack Obama calls her a “hero of mine.”) While her threat has softened since she joined the government as a lawmaker three years ago, many new perceived threats continue to arise.

This fear of defiance has led authorities to violently crush demonstrations time and again. A new law legalizing protests was supposed to end this bad habit. But that law, like many others in Myanmar, is easily subverted.

Does this movement have anything to do with Aung San Suu Kyi?

Sort of. But not in the usual way. A senior insider within her political camp, Thein Lwin, is at the forefront of the student movement. Suu Kyi though has sided instead with the government, publicly supporting its plan for a slow reform of its education system. Thein Lwin has since been cast out of the party’s inner circle.

Suu Kyi and her party have taken great pains to distance themselves from the student-led movement. This is a troubling turn for the icon, who rose to prominence by agitating against authoritarian rule in the streets.

What are the stakes?

Myanmar’s education system desperately needs to be fixed. So that’s one important thing at stake. From the government’s perspective, however, there is potentially something much more immediate at risk.

The White House has cheered the country’s shift away from dictatorship. This process is supposed to culminate in a grand event: a truly free, fair election later this year. If all goes smoothly, Myanmar’s government could get billions of dollars in aid from entities such as the International Monetary Fund and the World Bank.

Crackdowns like the one on Tuesday, however, tarnish the country’s reformist reputation. It’s also a sign that some elements within the government may not be on board with the new management style. That could scare away major investors and donors who worry their own image could be hit if they tangle with a notoriously oppressive state. And that would mean less money for those in charge, a surely worrying thought.