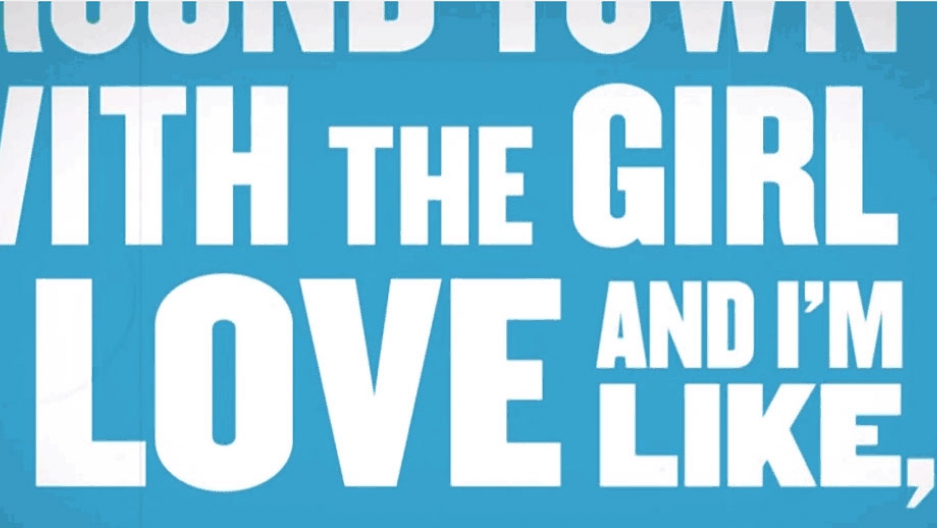 Music, lyrics and video were already a perfect combination for the Internet generation when Cee-Lo Green wanted to drive people away from cat videos toward something they could own.

As soon as we could connect to the web, we used it to connect with our favorite music — and we keep finding new ways to do that.

At first it was clunky websites that gave you lyrics — though not necessarily the right ones — and plenty of ads for tracks and ringtones you didn't want. But now musicians and fans alike are getting creative with videos that showcase lyrics in new ways.

YouTube has played a big part in the rise of lyric videos, but it’s not a new concept. George Michael and Prince both toyed with the concept in the 1980s and early 1990s, when they just didn't feel like making music videos for their singles. Going further back, there's Bob Dylan's iconic, homemade cue-card video for "Subterranean Homesick Blues" from 1965.

That static style — simply words fading in and out over the audio — carried over to the Internet when fans started making their own lyric videos. ”They were just ripping the song from iTunes and putting it up,” says Kevin O’Keeffe, an entertainment writer for The Atlantic.

Then things got more interesting: For his 2010 hit "F--- You," Cee-Lo Green shot a regular music video for the radio-friendly version of the song. But he also produced a slick, animated lyric video for the R-rated original.

“It's sort of the form that we know now as the lyric video," O'Keeffe says. "It’s one blue screen and it's words appearing basically on top of each other and sliding in and out and everything. It's exuberant about it as it happens. The words 'F---  You’ literally just jump onto the screen harder than anything else.”

(To be expected, the video below contains language that some may find offensive:)

Now the lyric video is even having an influence on music videos: Check out the animated lyrics all over the music video for "Lie, Cheat, Steal” by Run The Jewels.

But innovation in the lyric world doesn't end there. If lyric videos are a great introduction to a song, sites like Genius offer crowd-sourced, annotated lyrics for those who want the stories and meanings behind the words. The site started with rap, but it's since branched out to music of any genre — not to mention Shakespeare and the State of the Union address.

“For anyone who loves these facts and loves these words, it feels very helpful,” says Sasha Frere-Jones, a veteran music critic who's now an executive editor at Genius. “We’re dealing with production, culture, transmission of symbols.”

For example, find the hidden meaning in first the line of Taylor Swift's "Blank Space."

“‘Incredible Things’ is the name of her perfume, and every single person I showed it to — and they are definitely people who like and know Taylor — were like, ‘What? I didn't know that,'" Frere-Jones says. “And I'm like, 'Yep, it's product placement.' Literally nobody knew that. First of all, including me.”