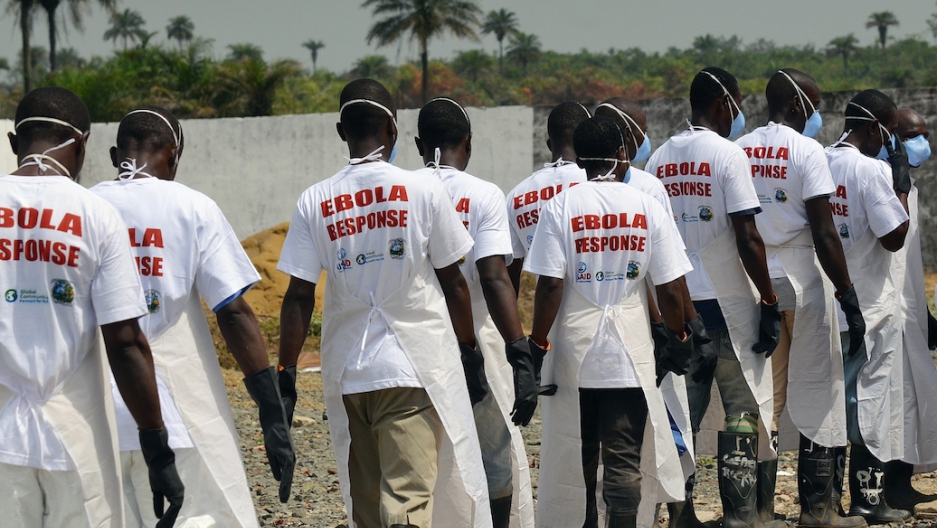 Workers wearing protective equipment march in line to go put the barrels containing victims of Ebola's remains in a car at the crematorium in Monrovia to be taken to the safe burial site. Liberia discharged its last confirmed Ebola patient on March 5, 2015, as it reported for the first time in nine months it had gone a full week without any new infections.
Credit: Zoom Dosso
Share

MONROVIA, Liberia — It is evening in the St. Paul Bridge neighborhood of Monrovia, and a team of “contact tracers” is meandering through dirt lanes between colorfully painted houses.

The tracers — whose job it is to find and monitor anyone who came into contact with an Ebola patient — used to come just twice a day to this community of cinder block houses, which stretches down either side of the main road that heads north out of the Liberian capital. Now they spend all day and sometimes much of the night here.

Liberia has recorded the deadliest toll of the three West African countries hit hardest by the virus, recording more than 4,000 of the 9,855 deaths so far reported during this most recent outbreak of Ebola. As the country’s nightmare nears its end (Liberia released its last Ebola patient on Thursday) most people are breathing a sigh of relief. But experts have warned that this is one of the most dangerous moments in an epidemic.

In the first phase of an outbreak, “the disease finds you,” says Dr. Francis Kateh, a senior official on the government’s Ebola response team, recalling the days when sick people and their relatives searched desperately for available beds. "But getting to zero patients, we have to go out there and find it."

And the stakes are impossibly high: “If you miss a contact, that’s another chain reaction."

And so it falls to the contact tracers to follow the last-known chain of the virus in Liberia, and to deal the final blow to the epidemic.

“We are living in St. Paul Bridge!” says Matilda Fallah, a 36-year-old nursing student who has been contact tracing since June. “We have spent all of our time here in recent weeks.”

Between their morning and evening rounds to monitor people who had contact with Liberia’s last Ebola cases, the team waits on benches in the shade of a tree so they can react immediately if someone becomes ill.

Today they are here to check on about 20 people. They take temperatures and ask them how they feel. The disease can take up to 21 days to incubate, so people who have worked with or lived with or taken care of someone with Ebola are monitored for three weeks.

What worries the tracers and other experts most is that, after months of intense vigilance, weary Liberians are letting their guard down.

Experts don’t see zero confirmed cases. They see more than 80 people who may yet develop Ebola. They see dozens of new infections reported each week in neighboring Sierra Leone and Guinea — any of which could start a new cluster here. They see 42 long days — two incubation periods — that Liberia must wait from its last confirmed infection before being declared clear.

“We know that getting to zero will be the most difficult thing," Kateh says. “Because people become complacent, denial sets in. Someone thinks, ‘Although I have symptoms, I think it’s malaria.'"

Matilda Fallah asks Mary Wilson if she has any joint pain, a symptom of Ebola. Wilson who is in her sixties dances and jumps around to show she feels fine. Matilda Fallah is a contact tracer, a team that monitors people who have been in contact with known Ebola patients.

Counterintuitively, the decline in cases in Liberia is making it more difficult to combat the outbreak. The health system — which almost collapsed during the epidemic — is slowly reopening. That has offered the virus one of its most fertile grounds for infections again.

"There’s an extraordinary amount of effort going into stop the current chain but there’s also a great deal of challenges with opening the health system with suspected Ebola patients,” says Dr. Frank Mahoney, who leads the US Centers for Disease Control and Prevention's response in Liberia.

Contact tracing is the only way to stop Ebola, but during much of the West African epidemic, there were simply too many cases to follow. In the wake of massive American and international aid, the outbreak has been contained to the point where contact tracers are able to do their work genuinely for the first time.

For several weeks, experts have traced all of Liberia’s cases back to one patient — an old woman who lived in St. Paul Bridge. Even with the intense focus on this last chain of transmission, sick people have popped up in other neighborhoods in the capital and other parts of the country. But every sick person has been on someone’s contact list.

“There have not been so many surprises,” Mahoney said. "What everybody is worried about is somebody showing up with Ebola and we don’t know where they got it."

And that has ramped up pressure on the contact tracing teams.

One team in St. Paul Bridge recently spent nine hours trying to persuade a woman on their list who had started running a temperature and was vomiting to go to a treatment center, Kateh said. That team had received a tip around 1 p.m. that the older woman was sick. The woman was willing to seek treatment, but her relatives did not want her to go.

It’s these sorts of cases that show the breadth of skill the teams must possess: They act not only as epidemiologists and diagnosticians but also as psychologists, addressing the fears of families and communities, as social workers navigating complex hierarchies, and as teachers spreading information and combating misinformation.

The woman’s family would not budge. The team called in the police to “add to the persuasion,” Kateh said. By 10 pm, the family had agreed, and the woman was taken out by a paramedic team in protective suits that had been waiting quietly out of sight since the afternoon.

An Ebola contact tracer, Joe Young takes the temperature of a father and his daughter who had contact with an Ebola patient who was living in St Paul Bridge neighborhood of Monrovia.

The work can be grueling. West Africans have been forced to abandon important religious practices and forego the everyday intimacies of handshaking and hugging. That has created enormous stigma around Ebola. As a result, contacts often resent their monitors since their visits publicly announce that this house may be marked with the stain of disease.

At the first house Fallah’s team visited, a woman yelled at the contact tracers, accusing them of telling her neighbors to move out because she or someone in her family might be sick.

After several tense minutes, the team calmed her down, but they left without taking anyone’s temperature because sometimes it’s more important to maintain the relationship than to monitor the symptoms. They have to come back here tomorrow and the next day and the next.

Still, Fallah says the dramatic fall in cases is a validation for the team of about a half-dozen people, many of whom were students before the outbreak.

“We feel our effort is not in vain,” she says.

There were happier moments, too. Another older woman started dancing when asked if she had any joint pain. Her family and neighbors shouted her name and clapped out a beat, as everyone forgot for a minute why the team was here. And then it was on to the next house.