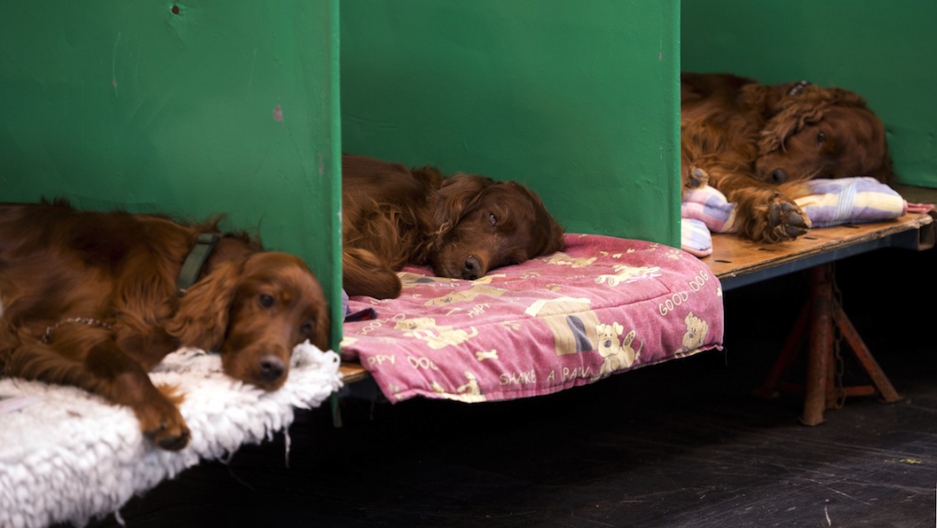 Irish Setter dogs sleep in their pens on the first day of the Crufts dog show at the National Exhibition Centre in Birmingham, central England on March 5, 2015. A setter named Jagger who showed at the event died soon after. Poisoned meat was found in his stomach.
Credit: Oli Scarff
Share

Editor's note: There are new updates on this story. Read the latest here.

LONDON, UK — Allegations of skullduggery have long hounded Crufts, the Birmingham, England dog show that is the world’s largest canine competition. False commands shouted from outside the ring. Laxatives slipped into dog food.

Thendara Satisfaction, a three-year-old Irish Setter who went by the name of Jagger, collapsed and died on Friday at his home in Belgium, the day after placing second in his category at Crufts. The 124-year-old annual competition concluded Sunday.

His owners believe the actual target may have been Noodle, their nearly identical Setter, who beat half-brother Jagger for the Best in Breed title. The two dogs switched benches at the last minute.

Two other dogs reportedly fell ill at the event.

“I saw one of the prize-winning dogs being sick in the ring on Friday,” one of the competition judges told the Telegraph on condition of anonymity. “His eyes were rolling and she had to take him to the vet. She thought someone had poisoned him, although she had no proof.”

“Then there was another lady with a champion bitch who was sick in the morning, then she was ok when she was shown, and when she got home she was passing blood,” the judge added.

The Kennel Club, the show’s organizers, said they were waiting for the results of the full toxicology report from Belgium, due later this week.

“The timings from the autopsy make it clear the only place this could have been given to Jagger was while on his bench at Crufts,” Jeremy's wife Dee Milligan Bott wrote on Facebook.

“We can't and we won't think that this was the act of another exhibitor,” Milligan Bott wrote. “If we thought this we couldn't go on, and the last 30 years would be a complete waste.”

If Jagger was in fact murdered, the central question is: Why would someone go to such great lengths to do it?

“I just think it's some person with a grudge against dogs or the show,” Jeremy Bott told the UK news network ITV.

The dog’s death has scandalized the show world.

“Dogs have been tampered with at other championship shows so this is not a first,” Gillian Barker-Bell, who judged the Irish setter category, told the Telegraph.

“But I have never heard of a dog actually dying. What a sick mind to do something like that.”

Jagger was the son of former Best in Breed winner Mr. Jingles.