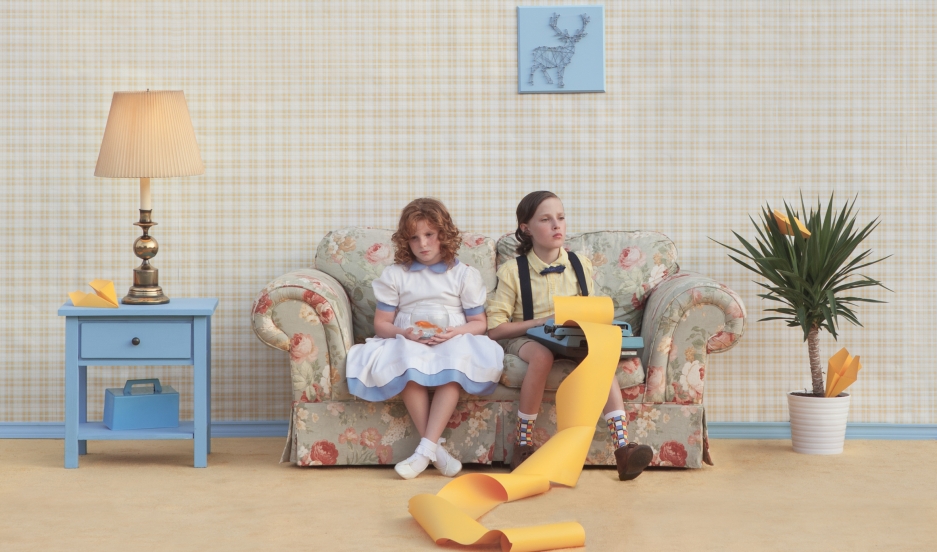 Justin Bettman and Gözde Eker animate their sets with actors hired through a local casting website. After they’ve staged their photo, they leave the set up for passersby to explore, photograph, rearrange or selfie. This living room was the first set they built. 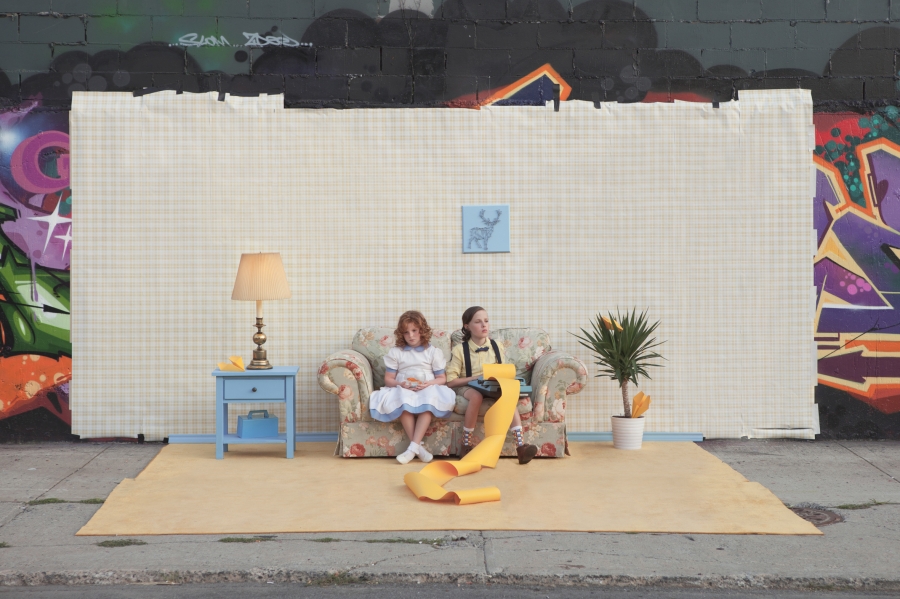 Here's the scene on White Street near Siegal Street in the Bushwick neighborhood of Brooklyn.

Picture this: A man with a mustache reading the newspaper in a blue bathtub. A girl unwrapping a rocking horse on Christmas morning. A little boy gazing down despairingly at the bed he just wet. These aren’t scenes from a movie, but they are sets — sets built in the street from discarded furniture, populated by actors, and created by a pair of Wes Anderson fans from Brooklyn.

“Initially it was like, let’s just create beautiful photographs,” says Justin Bettman, a photographer. Bettman had this idea of creating a series of whimsical domestic vignettes, so he sought the help of Gözde Eker, a Turkish-born set designer.

The thing is neither of them lived in an apartment big enough to accommodate their set-building dreams. And renting a studio cost too much.

“Then we kind of had that ‘aha’ moment when we were like on her roof and looked down and I was like, the side of a building and a floor is the same thing as a studio so why don’t we try shooting it outside?” Bettman says.

“So we were looking down,” Eker adds. “Hmm, maybe here, maybe there…” 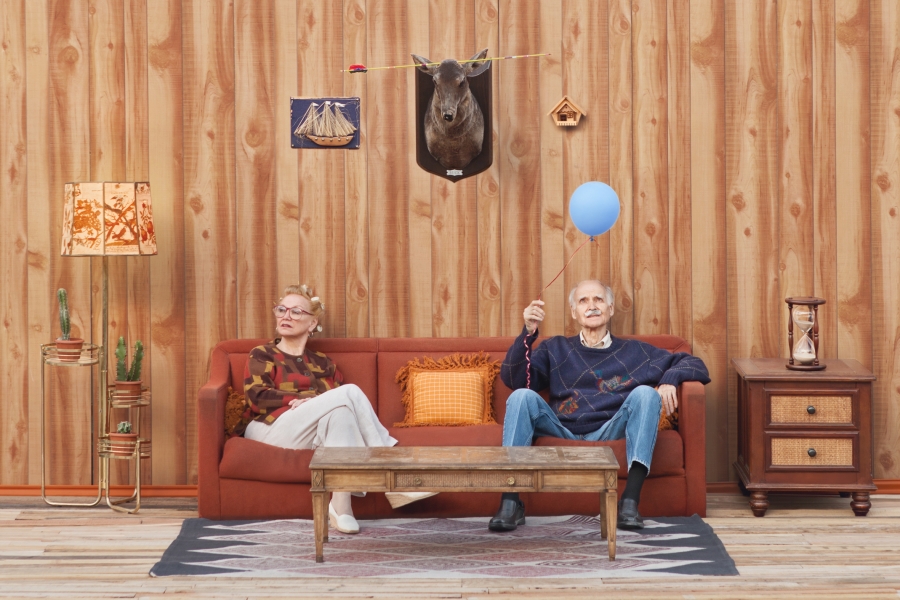 The blue balloon this man is holding was not an original prop — they were shooting the scene when it floated by. Bettman ran after it. “I almost got hit by a car,” he laughs. “But I was like, ‘This is so perfect.’” 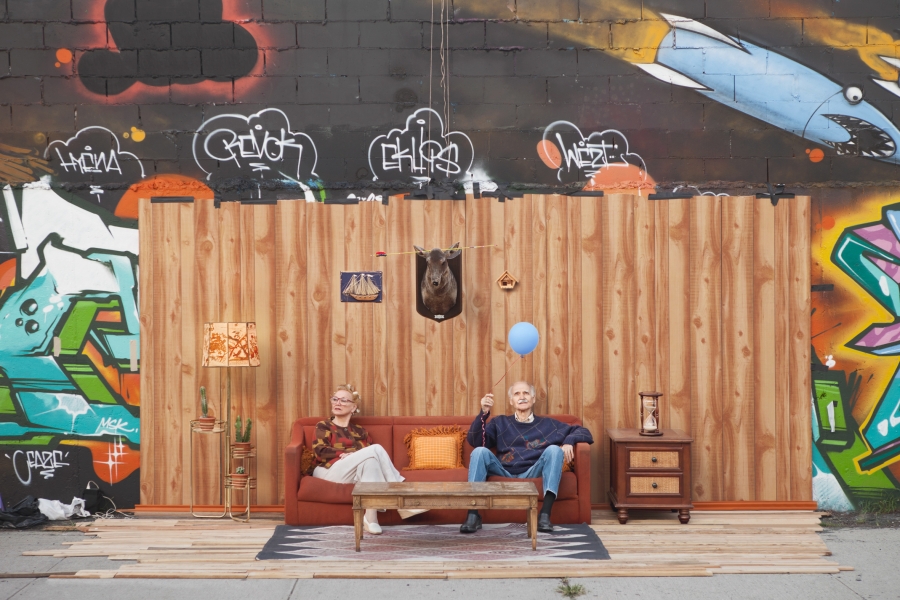 This is what the scene looked like on White Street in Bushwick, Brooklyn.

Once the street became their set, decorating it with castaways was a natural choice. After all, Americans generate more trash per household than anyone else in the world. Bettman and Eker started gathering all that choice stuff in the weeks and months between installations, which meant having to think quick — like the time Bettman found a fake deer head in the trash while he was out running. Shirtless.

“I knew it wouldn’t be there by the end of the day so I picked it up and I started running with the deer, like, on my chest and I had to run a mile and a half home. I’m pretty sure everyone thought I was doing hilarious performance art.”

And building a living room — complete with wallpaper, furniture and carpeting — outside, overnight, in New York City, involved problems they didn’t anticipate.

“In the summer it was so hot, you know, and we were trying to put the wallpapers on the wall and the tapes were melting,” Eker says. 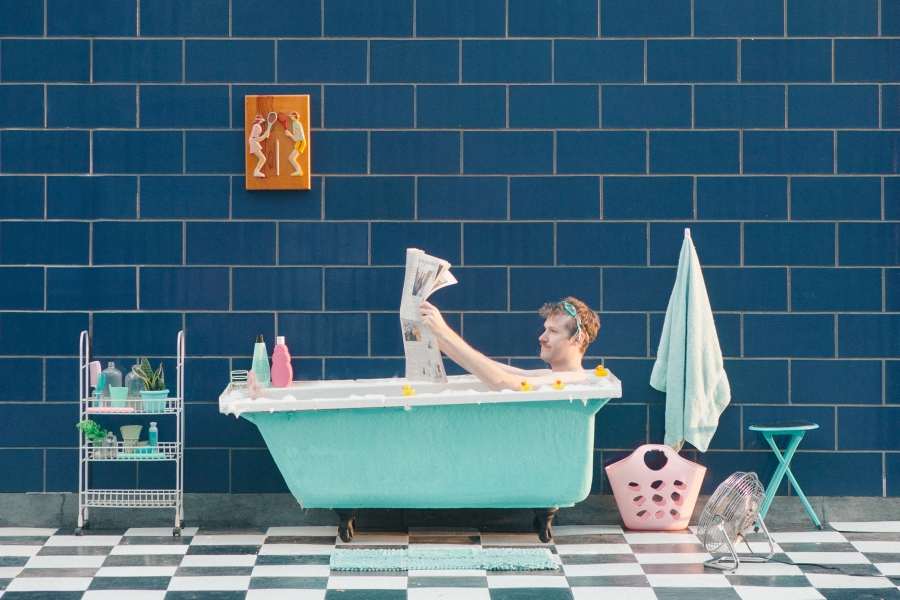 The toughest thing about creating this bathroom scene was finding just the right tiled wall. They found it using Google Street View. 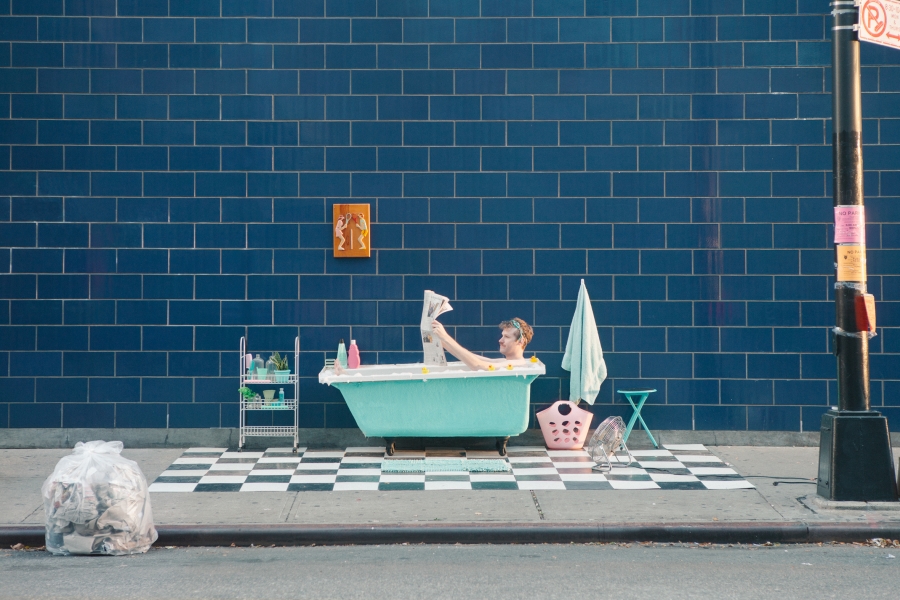 The bathroom scene on 17th Street in Manhattan.

But the big question on my mind was: What did the, you know, authorities make of all this?

To be clear, Bettman and Eker weren’t trying to litter. They’d leave a note explaining this was an installation and it would be taken down on a certain date.

But is it okay to set up a bathroom in the middle of 17th Street?

“We had cops drive by,” says Bettman, “but they didn’t say anything, so we decided to push our luck a little bit more for the next one. And every one after that, we keep pushing a little more to see what we can get away with.”

And so what started out as an art project also became a commentary on our disposable culture and how public space is valued.

It also seems like a good barometer of government tolerance. I asked Eker, could they get away with this in her native Turkey?

“That’s a really good question,” she says, laughing. “You definitely need a permission.”

And ... the streets of Istanbul are too narrow anyway, she adds. 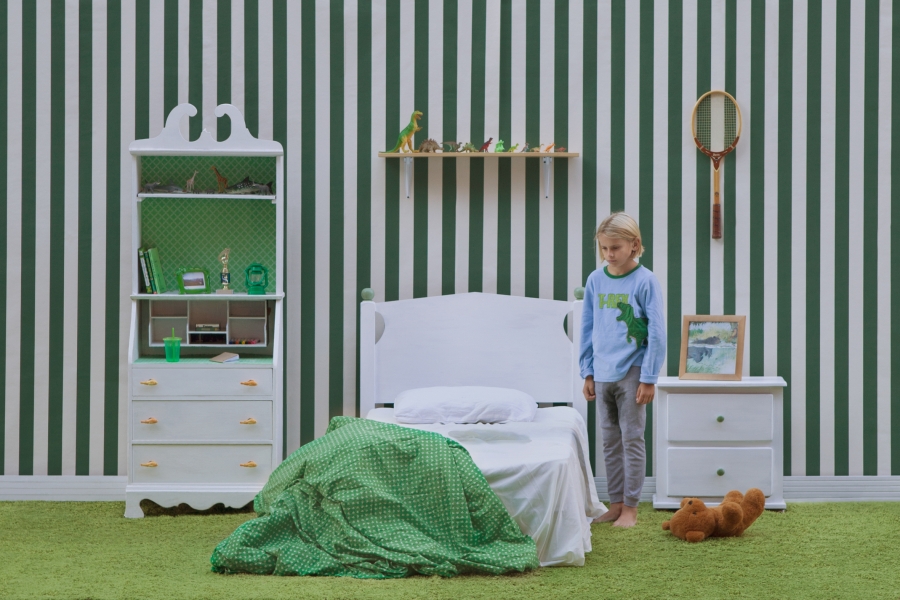 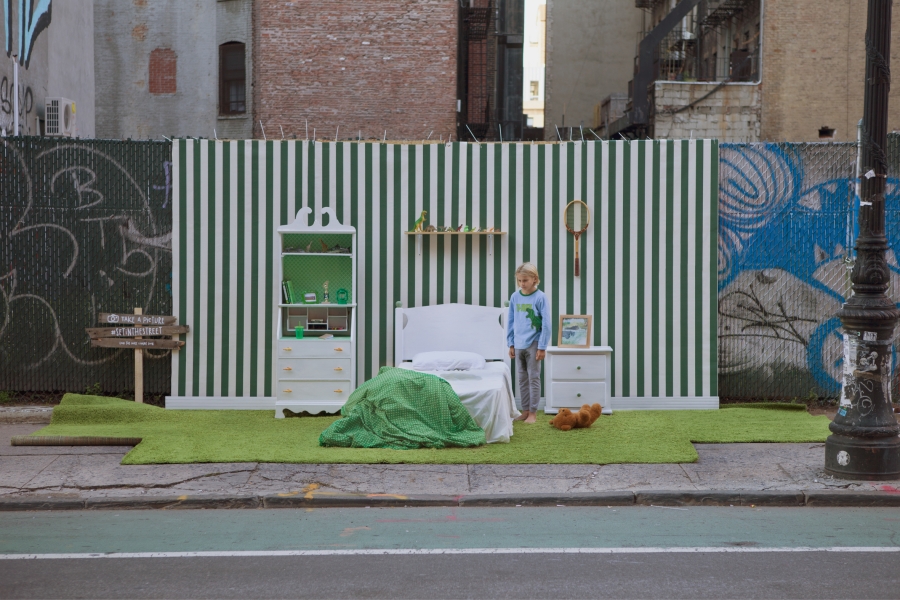 Their set on trendy Rivington Street on the Lower East Side of Manhattan lasted only a few hours before people carted pieces of it away.

How long their sets stayed up seems to have less to do with the cops than the value of the sidewalk they borrowed. The bedroom they built on the swanky Lower East Side was gone within three hours, while a living room way out in Bushwick, Brooklyn, lasted more than a week. And while most people just take pieces of the set home with them, Eker says that people sometimes add things, like a chair.

“In Bushwick, they add some graffiti to it, some big stickers,” she says. “It’s kind of nice.”

It’s nice because it’s what Bettman and Eker were hoping for. They didn’t give their project a name. They just gave it a hashtag — #setinthestreet — because they wanted people to make their own art out of the sets they built and share it online. 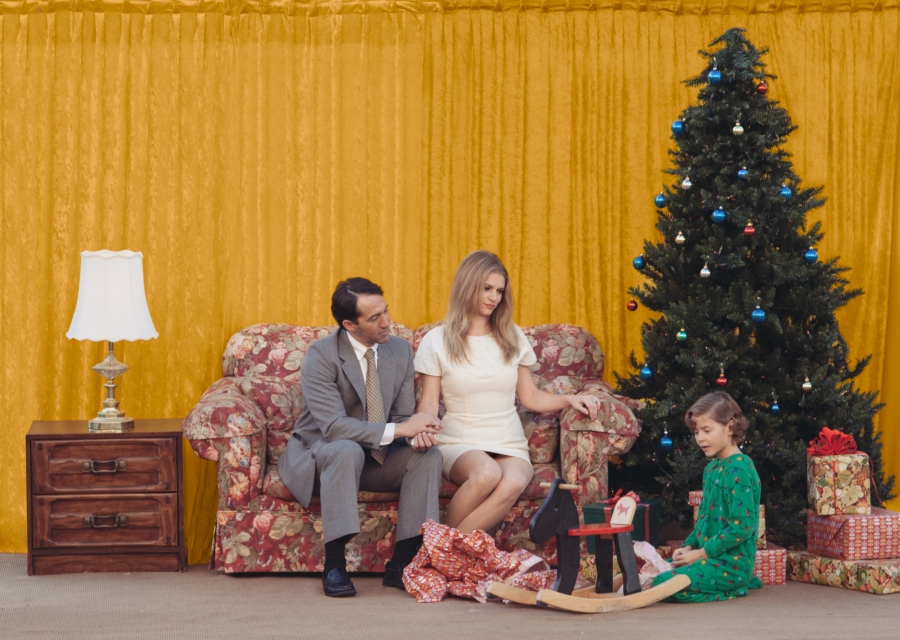 Bettman built and shot this scene the day after Christmas while home visiting his parents for the holidays in San Francisco. 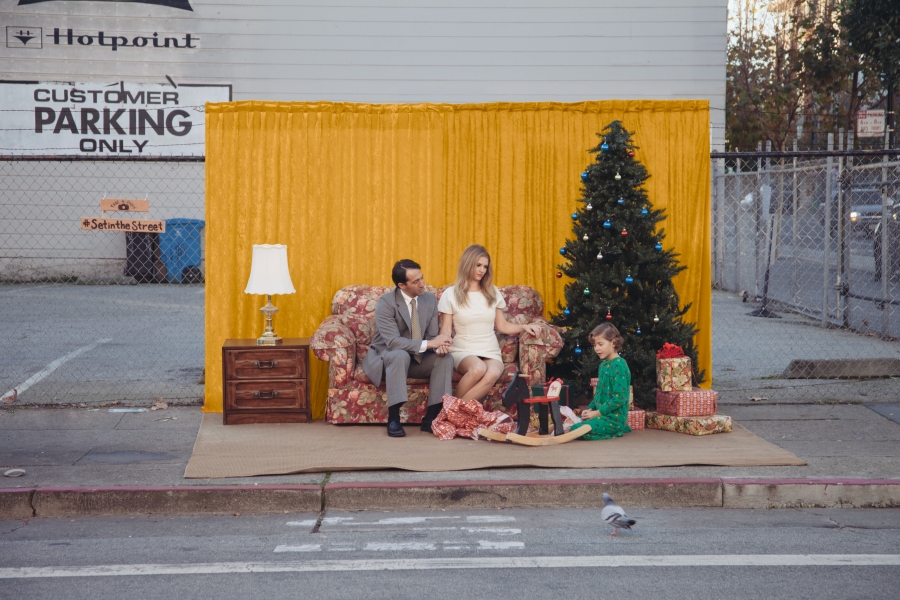 In the Mission neighborhood, San Francisco.

Their last set, a modernist dining room, went up in Williamsburg in mid-February, but by the time I arrived a day or so later, it was already gone.

Who took it apart, I wondered. Police? A ravenous horde of thrift-shopping hipsters? Maybe the guy who runs the parking garage across the street?

It was the wind, Bettman told me. It blew their set, literally, into the street, but not before a couple dozen people stopped by to take pictures — proving it wasn’t just a mirage.

An earlier version of this story misspelled the name of Gözde Eker. We sincerely regret the error.