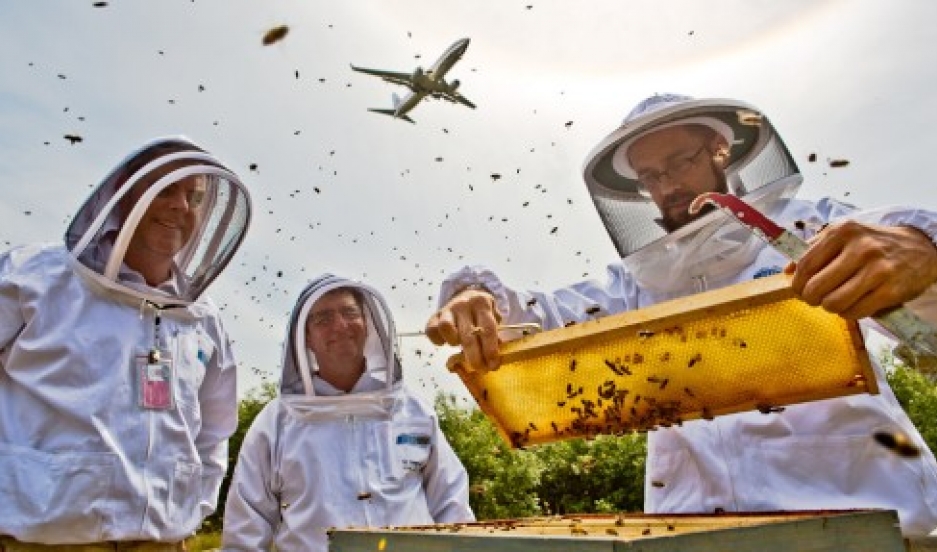 The practice of maintaining beehives on airport property began in Germany a decade and a half ago and has spread, reaching Chicago, St. Louis and Seattle in the United States.

The hives are typically kept in the buffer zone on the outskirts of the airport. The bees give airports a PR friendly way to show off their green bona fides and find a use for land that legally can’t be developed. It’s also good for honeybees, whose population has been put under stress by “Colony Collapse Disorder.” While the number of bee colonies that died last winter was lower than in previous years, the rate — 23.2 percent — was still higher than what beekeepers believe to be sustainable, according to a report from the US Department of Agriculture.

Bob Redmond, a beekeeper and executive director of the nonprofit The Common Acre, helped bring the idea to Seattle’s Sea-Tac airport after reading about a similar project at Chicago’s O’Hare. Sea-Tac helped get things going with a small grant and a 50-acre space. Redmond and his team now oversee 25 hives.

His vision didn’t stop there. While the honeybees are the main focus, his team are planting trees, shrubs and flowers on the land that will also be a food source for wild bees in the area.

“The honeybee is sort of the poster child for bees, and when people think ‘I want to save the bees,’ they think of that one first. But in reality there are 4,000 species of bees in North America and only one of them is the honey bee,” Redmond said. “Granted that we do the most with that bee. It's the only species — or not the only, but it's the main species of bee that we do depend on for agricultural pollination. But the point of this project is to look at the whole picture, and that's why we're planting pollinator habitat.”

The Common Acre also runs an art exhibit in the terminal, and sells honey to passengers to help cover the project’s cost. The honey was lab tested to make sure it didn’t contain contaminants. Since the area around the beehives isn’t developed, the bees have access to a large range of native plants, which Redmond says gives the airport honey a different flavor from that found in backyard urban beehives.

“The airport honey tastes wild, and kind of woody and grassy, and the backyard honeys taste sweeter and more fruity,” he said.

For Redmond, the project isn’t just about bees, but is representative of how cities can best use their empty spaces to support urban agriculture as a whole.

“We're looking at increasing urban development and decreasing land availability, so we have to say, what is available? And are we really going to plant it all with grass?” he said. “Or are we going to plant something that can make a difference?”