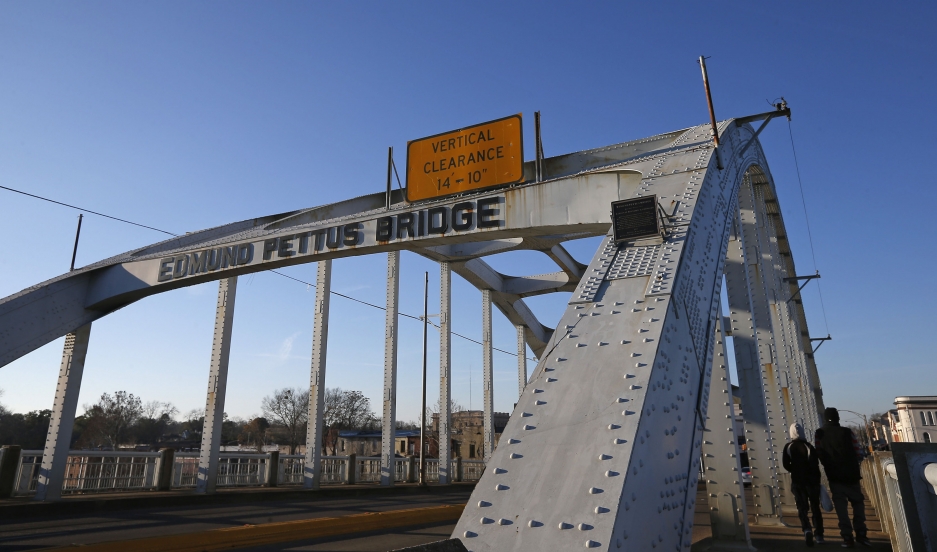 The Edmund Pettus Bridge in Selma, Alabama. The bridge was the scene of a major civil rights confrontation in March, 1965, in which police beat protesters who were marching to demand voting rights for African Americans.

On Sunday, it will 50 years since 600 civil rights activists marched from Selma to Montgomery, Alabama to push for their right to vote.

It was known as 'Bloody Sunday' — by the time marchers reached the Edmund Pettus Bridge in Selma, they were met with water hoses, clubs and were savagely beaten. The march, however, was a catalyst for what eventually because the Voting Rights Act in the US.

Nearly every year, a ceremony commemorating the history day is held, but this year, immigrant rights activists will join civil rights leaders to show their support and "to affirm our role in a unified fight against the root causes of repression targeting our families," according to the Alabama Coalition for Immigrant Justice. 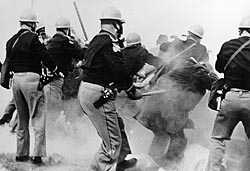 A photograph from 1965 of police attacking marchers heading to Montgomery from Selma, Alabama.

Courtesy of the Federal Bureau of Investigation

"If African Americans achieved their right to vote after years of organizing, we must learn from them and continue organizing to achieve immigration reform," said Cornelio Reyes, a member of the group. The landmark anniversary will even bring President Obama to Selma, where he's expected to make a speech.

Immigrants in Alabama have long fought back against legislation geared to removing undocumented people out of the country. The best example of that is the state's 2011 HB-56 law that was regarded as one of the harshest pieces of anti-immigration legislation in the country. Slowly, however the law was taken apart with lawsuits by the US Justice Department as well as civil rights organizations.

But, despite the end of HB-56, a spokesperson for the immigrant rights group says that they are organizing their efforts on Sunday to "show the president that we are still fighting for our main goal: to achieve real immigration reform in Congress. We want to show that the community is still fighting for it."

"We want the Latino community’s presence to be noticed and to demonstrate unity because only together can we fight for all of our families and gain the strength to win comprehensive immigration reform," said Judith Zambrano, another group member.

According to the group's press release, immigrants from across Alabama and the US will join forces with members of the African American and LGBTQ community to "to stand up against an agenda of racism, violence and disenfranchisement."