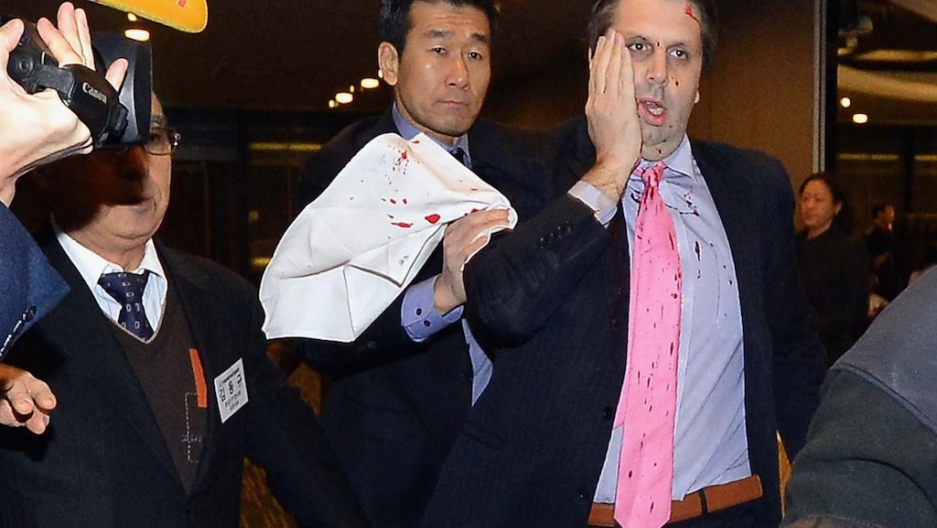 In this handout image provided by The Asia Economy Daily newspaper, US Ambassador to South Korea Mark Lippert is seen after getting attacked on March 5, 2015 in Seoul, South Korea.
Share

SEOUL, South Korea — Wearing traditional garb and wielding a 10-inch fruit knife, the assailant stood up and shouted for the unification of the two Koreas before slashing his supposed enemy: the guest of honor, US Ambassador to Seoul Mark Lippert.

Ironically at a lecture pushing for North-South reconciliation, Lippert was rushed into a police cruiser, leaving behind a trail of blood from cuts on his face and wrist. The ambassador was hospitalized and had surgery but is apparently okay.

The governments of Seoul and Washington may enjoy good relations, but every so often a fervent South Korean nationalist squares off against the country’s largest ally.

Over the years, the United States (along with historical rival Japan) has been the target of raucous anti-foreign protests, which have occasionally spun out of control. Among the myriad of grievances, some Koreans accuse the United States of meddling, and interfering with Korean unification.

This time, the suspect is 55-year-old Kim Ki-jong. He writes a blog full of nationalistic, anti-American screeds. His attack coincides with the start of joint military exercises between the United States and South Korea.

“There is most likely no direct tie between the slasher and Pyongyang,” said Benjamin Young, an analyst and historian on Korean affairs. “Pan-Korean nationalism has a pro-North tinge to it that is troubling. In turn, this influences the way Korean nationalists view US intervention on the peninsula.”

In other words, he represents a marginal and probably powerless faction of rabble-rousers that first emerged among the country’s pro-democracy movement of the dictatorial 1980s. South Korea today is a stable democracy, but unruly protest tactics like knife attacks and smoke grenades are somewhat common.

Before the attack on Lippert, the most dramatic protest happened in 2011, when a left-wing lawmaker set off a tear-gas grenade on the National Assembly floor in protest of an impending free trade agreement with the United States. The bill passed regardless.

Opening Korea’s markets to Washington has long been a controversial topic among leftists. In 2008, tens of thousands of protesters challenged certain imports of American beef, accusing the government of bowing to US dictates during free trade negotiations.

That movement came on the heels of another nationwide crusade against American military bases, which many Koreans say contribute disproportionately to crime and pollution. Leftists also worry the US military presence gets in the way of ant potential unification with North Korea.

In 2007, during the annual military exercise, protesters slapped anti-American stickers on US military vehicles, and unable to get past security the next year, stayed on the sidelines with shouts of “Yankee, go home!” Even Psy, the clownish horse-galloping dancer from “Gangnam Style,” bellowed protest slogans in the early 2000s, rapping about “Yankees torturing Iraqis” and destroying a model of a US tank.

While such anti-American sentiment has died down in recent years — in no small part due to Lippert’s efforts to make himself accessible to Koreans — it lingers, and sometimes it erupts, as it did today.