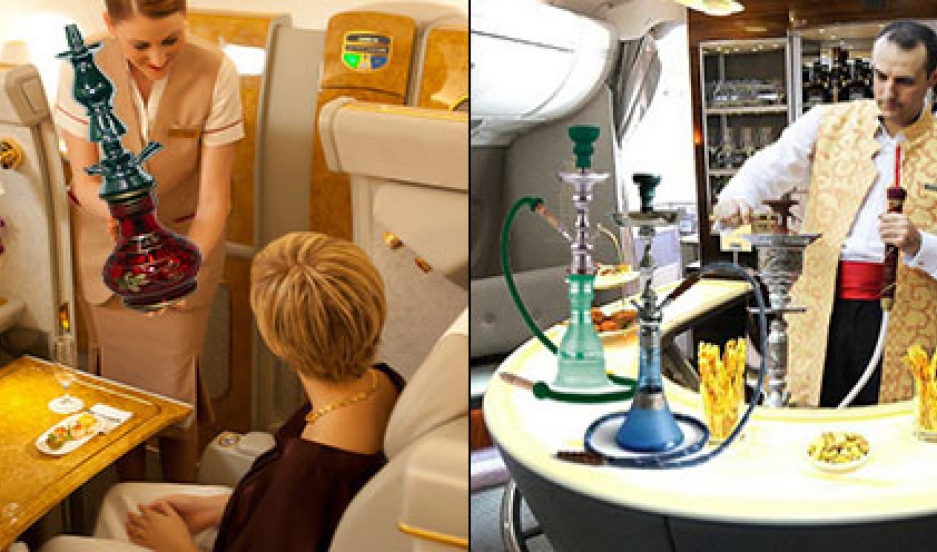 Images from The Pan-Arabia Enquirer's fake news story about how Emirates Airline was now offering shisha or hookah lounges on its luxury A380 fleet.  Many readers believed the story which eventually forced the airline to make clear that the story was from a satirical news site.

Is there anything funny about ISIS?  The Pan-Arabia Enquirer thinks so.

The Pan-Arabia Enquirer can rightly be called The Onion of the Middle East. It's the brainchild of a British man who prefers to remain anonymous. He lived in the Gulf region for many years and only recently relocated back home home to the UK. He says satirists must make fun of ISIS.

"I think a lot of what we do is just purely to continue to ridicule what they're doing because, on one side, it's absolutely terrifying," he says. "On another side, it's absolutely far-fetched and totally removed from reality. So I think it's our job as satirists to try and highlight that."

He launched the satirical website in 2010, mainly to keep himself amused. "People expect it to have started with some sort of grand plan to introduce satire to the region, but it really started just because it made me laugh. And the fact that it seems to have made other people laugh along the way is just a bonus really," he says.

The editor says he chooses anonymity not for his own security, but rather for the mystique. "I think if people found out who we actually were, it wouldn't be quite so interesting." Also, he and his fellow writers have full-time jobs and want to keep them. Many of The Pan-Arabia Enquirer's contributors are Arabs and Muslims based in the Middle East.

"The writers that send in stuff are out there on the ground and," he says, "coming up with ideas and seeing what goes on around them. The area still holds a very special place in my heart."

Emirates to introduce shisha lounges onboard A380 fleet http://t.co/efNFs6kSL2 #OnThisDayLastYear

The man says the site's most popular story was about how Emirates Airlines was going to introduce shisha lounges in first class on their A380 fleet, where passengers could smoke flavored tobacco from a communal hookah or water pipe.

"It's the sort of thing that if you think about it, it's obviously nonsense. There's no way on earth," he says. "But it's just close [enough] to the truth that people picked up on it." It became an overnight sensation and The Pan-Arabia Enquirer website crashed after only a few hours. "We had people having online fights in the comments section about whether shisha lounges were a good idea or a bad idea and people were wading in with all sorts of arguments."

Eventually, Pan-Arabia Enquirer's editor got a letter, "the funniest letter I've ever received." Somebody had actually contacted Emirates Airlines who responded with a letter pointing out that the story came from a satirical website and that the airline had no plans to introduce hookah-pipe lounges.

Is anything off limits? "I think most areas involving religion. It's just a bit of a no-go zone. We're not setting out to offend people."

He also doesn't want to have the website blocked by offended governments. "That would lose all our audience so we have to be slightly careful about how we tone things. I think we've managed to find that fine line of pushing boundaries without stepping massively over."