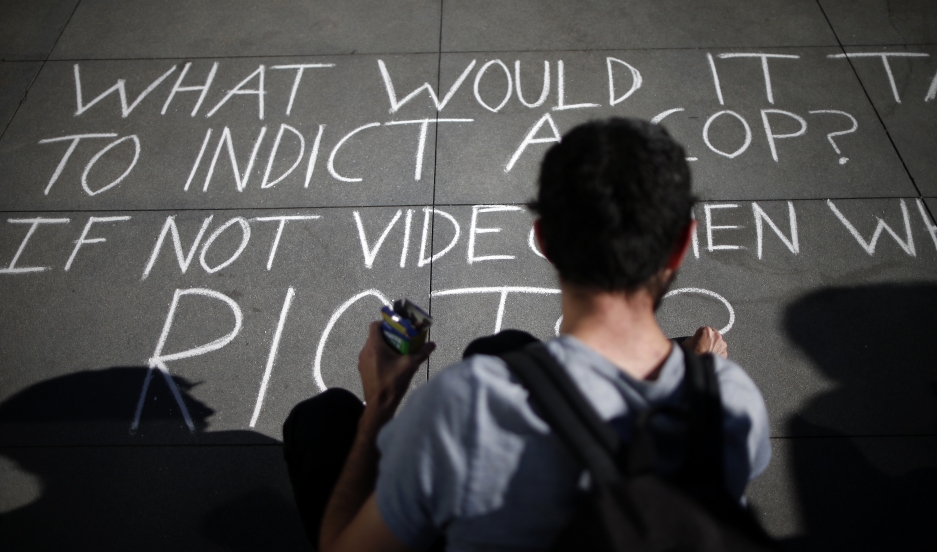 People protest against the killing of a homeless man by police outside LAPD headquarters on March 3, 2015.

The death of a homeless man in Los Angeles at the hands of police has stirred familiar emotions of shock and disbelief for some Americans.

The shooting, which took place on Sunday, was captured on video, but details about exactly what led to the incident are still unclear. It comes as the federal government tries to address growing discontent about police tactics in the wake of the killing of Michael Brown in Feguson, Missouri, and other high-profile police-involved deaths.

The Justice Department released a report on Tuesday that savaged the Ferguson police, finding a long-standing pattern of bias and discrimination among the city's officers. Local NAACP officials are calling for the department to be disbanded.

Sherrilyn Ifill, the president and director-counsel of the NAACP Legal Defense and Educational Fund, says it often seems like police departments are at war with communities.

“You’ll recall that in Darren Wilson’s testimony before the grand jury in Ferguson, he described the community where he encountered Mike Brown as being a kind of 'anti-police' community, at least in his mind,” Ifill says.

Ifill says police-community relations have long been strained around the nation, adding that officers are often looked at and behave as a “hostile occupying force” in communities of color.

Up until recently, Ifill says that certain parties have doubted the extent of racial discrimination. But the spread of smartphones have enabled residents to capture discrimination as it happens, something she says has helped change the dialogue about discrimination.

“The proof that we’ve been able to see in the killing of Tamir Rice and some of these other police encounters over the last year have captured the national imagination,” she says. “It’s not as though these incidents were not happening before, but we were not believed.”

And while citizens are taking action by documenting confrontations between police officers and citizens, the Justice Department is also attempting to tamp down on the behavior that can spark such incidents. A DOJ taskforce announced a series of reform recommendations on Monday. Here are some of them:

1. Embrace a "guardian mindset" to build public trust and legitimacy.

2. Acknowledge the role of policing in past and present injustice and discrimination and how it is a hurdle to the promotion of community trust.

3. Establish a culture of transparency and accountability in order to build public trust and legitimacy.

4. Law enforcement agencies should promote legitimacy internally within the organization by applying the principles of procedural justice.

“I think this [guardian mindset] recommendation from the taskforce is important because it’s a reminder to police that they are to regard themselves as the guardians of safety for all communities," Ifill says. She also applauds the recommendation for more transparency, saying that a lack thereof fueled tensions in Ferguson following Brown's death.

But while transparency is an important step forward, Ifill says things need to go farther.