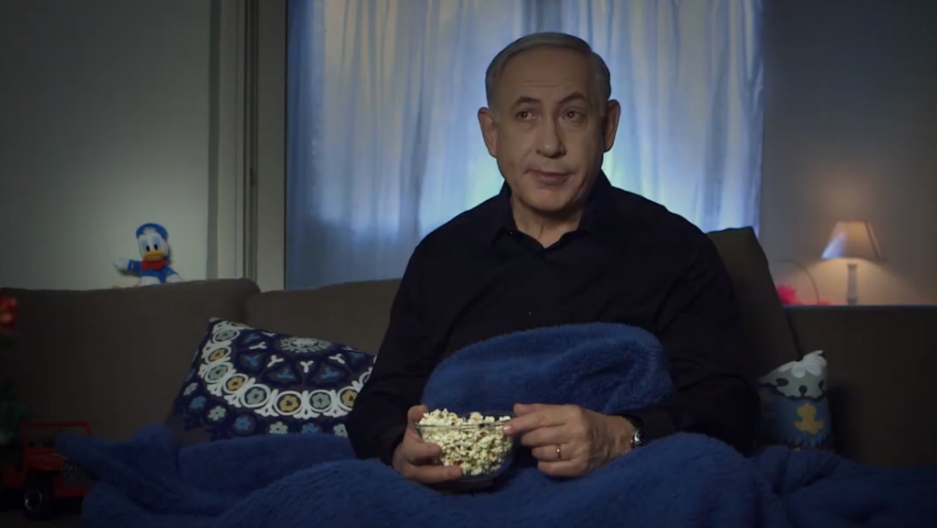 JAFFA, Israel — Benjamin Netanyahu's address to Congress has already been dubbed the best election ad ever. At nearly an hour long it's certainly one of the longest ones, and considering the damage it may have done to Israel's standing in the US it's probably the most expensive one ever made.

More from GlobalPost: Israelis are more concerned about the economy than Iran

But the Israel election season, now in its last two weeks, has been throwing up videos that can give any speech a run for its money — and make any PR adviser run for their lives.

Although there are dozens of parties running, only 11 are expected to pass the electoral threshold and enter parliament. And of those 11, only one can form a coalition government. Although Benjamin Netanyahu's Likud party and his main contenders, the Zionist Union, led by Isaac Herzog, are polling neck in neck, Netanyahu is likely to remain prime minister, as he counts many more natural allies among the parties than his rival. In fact, as the March 17 elections draw near, there are rumors that he might invite Herzog into the coalition, along with his more usual right-wing allies. This would give him a moderate gloss and badly damage his opponent's credentials in any future election.

Here's your guide to this election cycle's ridiculous campaign ads:

Netnayahu's former ambassador to the US, Michael Oren is running with a centrist party against the prime minister, and in that capacity he's busily criticizing his old boss. Although he's from upstate New York and a dead ringer for a villain on Power Rangers, Oren is going for Frank Underwood, with a particularly paint-stripping attempt at a Southern accent. Welcome to the new season of House of Caaaaaaa (just wait for it...):

Israel's leftmost Zionist party, Meretz, has a problem: although it's championing progressive policies, it's seen as aloof and elitist, a natural home for Israel's Ashkenazi (European-Jewish) elites. Thinly veiled insults in the direction of Mizrahi (Arab-Jewish) culture in previous campaigns didn't help. In these elections, Meretz decided to kick off their campaign with an ad shot as a generic Mizrahi wedding. The result looks like something from Dear White People:

Netanyahu's main challenger, Isaac Herzog, also has a problem: an impressive absence of charisma, compounded by an insufferable voice. Here's how he sounded while trying to challenge Netanyahu to a televised debate. The general line: "are you afraid of me, Bibi? I just wanna talk!"

When new campaign managers came on board, they decided to tackle the issue head on. In the next video, Herzog listed his achievements as military officer, lawyer and minister — but his voice was overdubbed with a deeper one, suspiciously resembling Netanyahu. The final line after a litany of accomplishments was — "and the only reason why some of you aren't sure whether to vote for me, is my voice."

Unfortunately, Herzog has taken the task of sounding more like Netanyahu a bit too seriously. In this clip, officers who served with him in the signal intelligence unit 8200 tell us how the pro-peace candidate has been "watching arabs in many situations," "knows Arab mentality," and knows "when to make the call to kill these people," complete with an "adrenaline rush that can last you for days."

Finally, it wouldn't be an election season without some performance art from Israel's fledgling Green Party. Machine guns, goats shouting names of Israeli politicians, some random cancer stats, and Keyboard Cat singing about how "we the animals are going to vote":

The most obnoxious video, however, came on the margins of the election season. It features a hook-nosed Jew gobbling up golden coins to spread unpatriotic lies across the media, and eventually hanging himself — you know, just like Judas. This classically anti-Semitic ad was made by Israeli settlers, and to them the Jew is the Israeli left:

The incumbent, meantime, has cast himself as a friendly babysitter — excuse me, Bib-sitter — eager to watch over all our children. Some might say that the hundreds of children killed in Israel's attack on Gaza just this summer and the dozens of young Israeli soldiers who died on Netanyahu's watch don't really qualify him for the job, but what the heck:

If you're in need of some detox after these campaign ads, then look no further than Noy Alooshe's remix of Netanyahu's speech to Congress.