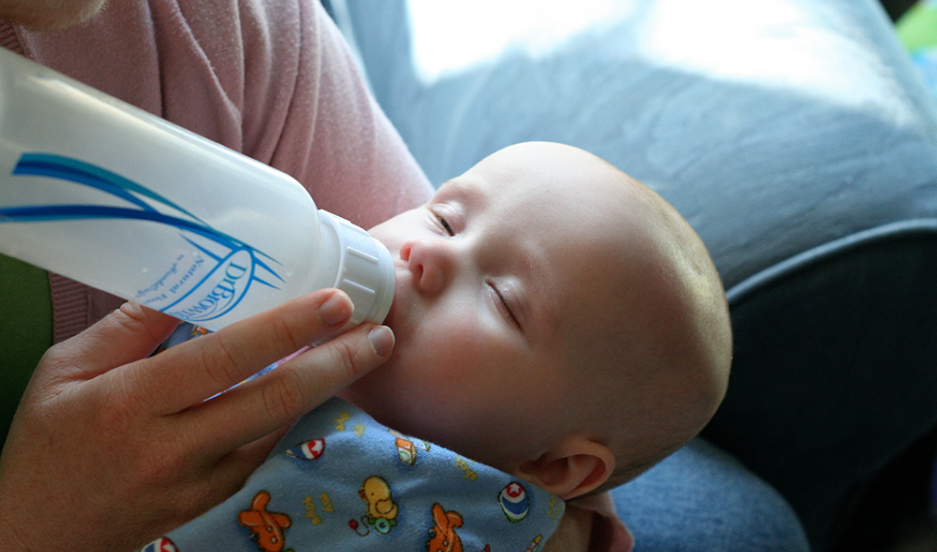 Phthalates are found in many plastics, including baby bottles. When a moist, warm product such as milk or formula comes into contact with plastic, phthalates can leach into the liquid.

A new study in the Journal of Human Reproduction finds that a common family of chemicals used to create flexibility in plastics can affect baby boys’ development in the womb.

The chemicals, known as phthalates, are known hormone disruptors. Several past studies have shown they affect human development and reproduction.

The new study, which was led by Dr. Shanna Swan, professor of preventive medicine at Mount Sinai Hospital Medical School, expanded upon a smaller study done a decade ago. The new study found further evidence of the chemicals' adverse effects.

Swan and her colleagues looked at a measure called the anogenital distance (AGD) — the distance from the anus to the genitals. This measurement is important because it's typically about 50 to 100 percent longer in males than in females, Swan says. The study found that when a pregnant mother had been exposed to higher levels of DEHP, a common phthalate in foods and other products, the AGD in male babies was closer to that of female babies.

A shortened AGD is “a mark of incomplete masculinization,” Swan says. “It also correlates with other genital measures, like penile size and testicular descent — and in adults it correlates with fertility and sperm count.” Sperm counts have been dropping by about 1 percent a year in the United States and Europe over the past 50 years.

Swan’s study is the largest and most comprehensive analysis of phthalates to date. Her initial study on AGD and phthalates looked at 85 boys; the new study had 366. In addition, Swan says, the recent study is “much more precise in the timing of exposure, the way the exposure is measured and how the outcome is measured.”

And crucially, Swab says, the statistical analysis is much better. “We’re controlling for a lot more potential confounders, and that's why we could find significant associations, even at this reduced exposure level. The current exposures are 50 percent lower than in the initial study.”

The developing fetus is without question at greatest risk from exposure to phthalates, Swan says. “People are working hard to identify all the ways in which phthalates can impair development, but certainly anything [in the fetus] related to testosterone that might be impaired by decreased levels in early development will likely be altered by phthalates,” she says.

Phthalates are nearly impossible to avoid in our modern world. Ninety-nine percent of the US population is exposed to most of the nine phthalate metabolites Swan studied. "Some are less common than others, but certainly DEHP is very, very common, and our detect rate was 99 percent,” she says.

The primary source of exposure to DEHP is via food. DEHP makes plastic soft: the plastic tubing used in an intensive care nursery, or in dialysis or in a blood bag, Swan explains. When a moist, warm product goes through the tubing, it pulls the DEHP from the plastic and the chemical enters the food or blood or whatever substance the tube is carrying.

“So if you're processing food, or milking a cow, or giving nutrients to a newborn, phthalates will enter the product,” Swan says. We even encounter phthalates in the supermarket, though we usually don’t realize it.

Swan’s previous study helped influence the removal of phthalates from children's toys. This one, she hopes, will help remove phthalates from food, “because that's how you'll protect the fetus: the fetus doesn't play with the plastic toys,” she says.

“We have to consider what the pregnant woman is exposed to, very early in pregnancy,” Swan concludes. “Since she can't make those choices herself, because she doesn't have the information, the only thing we can do is have the manufacturers keep the phthalates out. To do that, government regulations will probably be the way to go."