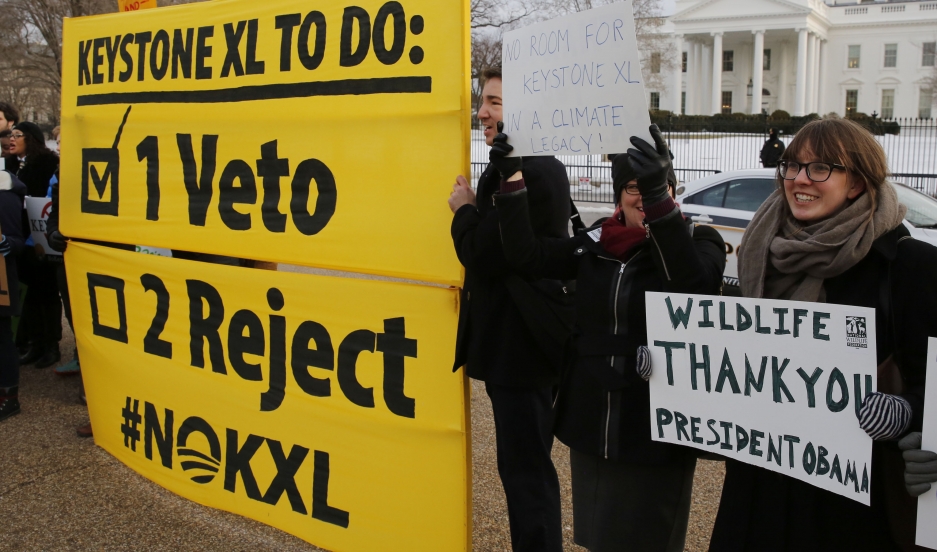 Last week, President Barack Obama vetoed legislation that would have authorized the building of the Keystone XL pipeline, putting the controversy to rest — for now.

The pipeline, which would have carried heavy crude from southern Alberta to the Texas coast, drew numerous opponents, many of whom were already protesting against fracking and tar sands oil development. Their activities drew attention from the FBI, which in October 2014 began contacting at least a dozen people to ask questions about their actions and their colleagues.

That move recalls the agency's snooping into anti-war protesters during the Vietnam era. “The FBI's historical response to dissent on the left ... is to try and stop it by intimidation and by force,” says Larry Hildes, an attorney in Bellingham, Washington. He believes there’s little reason to believe the government’s surveillance activities in the 1960s and 1970s have stopped.

Hildes was pulled into the issue after reporter Becky Kramer of The Spokesman-Review, based in Spokane, Washington, spoke with several people who were contacted by the FBI regarding their involvement with environmental groups.

Kramer related the experience of Helen Yost of Moscow, Idaho, a cofounder of Wild Idaho Rising Tide, a collective for environmental activists. The group was involved in protests against oversized oilfield equipment moving through the Pacific Northwest toward Alberta's tar sands.

Some people in the protests were arrested for being on the road when the oil equipment was moving through. Yost was not arrested, but she was fined $243 for disturbing the peace after she threw a protest sign at the back of a mega-load shipment that was moving through.

Yost received a text message from an FBI agent in December 2014 requesting that she speak with him, but she declined on the advice of her attorney. Kramer also spoke with two other people who were contacted by the FBI, including Herb Goodwin, a 65-year-old activist from Bellingham, who said he was contacted in October and asked to answer questions about a group called Deep Green Resistance. Goodwin also protested the shipments moving through Idaho and was involved in protests against coal trains in his hometown.

“[Goodwin] said… ‘It’s actually pretty spooky to have the FBI show up at your door, ask one question and leave,” Kramer says. “And he said, 'I think they were there to put me on notice that I was being watched.'"

Goodwin sought legal advice from Hildes, who is well-known for his work with civil disobedience cases. In the months after he began working with Goodwin, Hildes says other environmental activists began to contact him with similar stories.

“We got calls from a dozen people ... some of whom had multiple contacts by the FBI,” Hildes said. “That continued through December and into early January when the first media started to come out bringing this to public light, and that, as far as we know, is when the FBI harassment stopped.”

One woman outside Portland said she was visited twice by the FBI at her workplace, both times when she was alone in the office. The first time, Hildes says they refused to leave until she set a time and place to talk to them.

“She was afraid if her boss came back and saw this she would lose her job, so she gave them a time and place and then canceled,” Hildes says. When the FBI returned and was more insistent, Hildes says, she referred them to Hildes as her representative.

“They said to her, ‘We don't want to talk to your lawyer. Your lawyer doesn't have the information we want. You do,'" he says.

In response to emailed questions from Living on Earth, Ayn Sandalo Dietrich-Williams, the media coordinator for the FBI's Seattle Division, wrote that the agency conducts investigations "when it has reasonable grounds to believe that an individual has engaged in criminal activity or is planning to do so. This authority is based on the illegal activity, not on the individual’s political views, position, or any other beliefs."

Dietrich-Williams also said that "contacting a person does not mean that the person is the subject of an investigation."

Hildes' client from outside Portland eventually submitted to the FBI's questions about her environmental and political activities as well as ones about other activists, some of whom she knew and others she didn’t. They told her that she was not a suspect and their questioning was not a criminal investigation, which Hildes believes is either a ruse or an intimidation tactic.