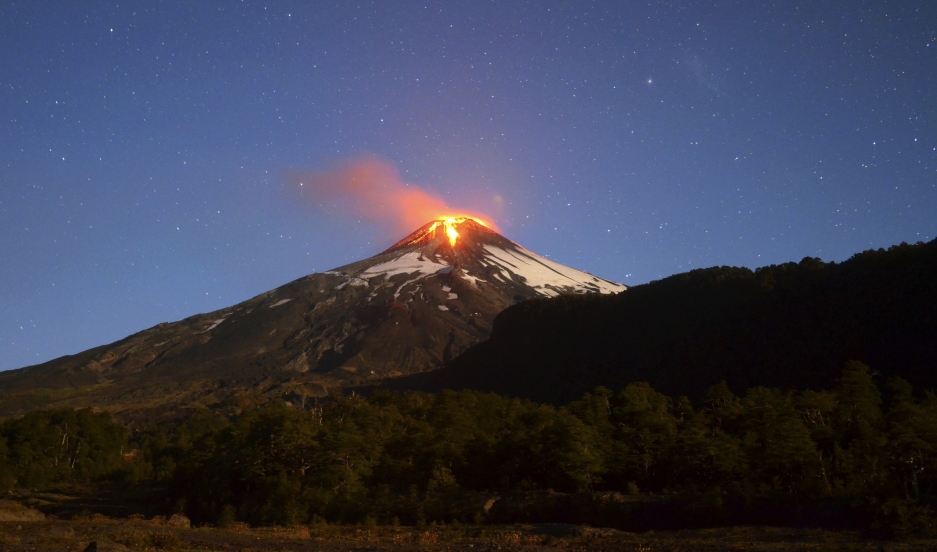 Ash and lava spew from the Villarrica volcano, as seen from Pucon town in the south of Santiago.

The Villarrica volcano, one of Chile's most active, began erupting Tuesday in the southern city of Pucon, some 500 miles south of Santiago.

Lava, fire and ash shot out of the volcano, reaching heights of 3,300 feet. Thousands of people were evacuated from the local towns of Pucon and Conaripe as a precaution.

Just imagine being awoken in the middle of the night by a siren — and seeing those fiery explosions in the night sky out your window.

Jose Manuel Reyes runs a La Bicicleta hostel in Puncon for foreign tourists. He and his guests watched the Villarrica volcano from the back yard.

“We saw a huge bullet of magma, almost twice the size of the volcano itself. It was spectacular. Then lava started to flow from the volcano. I was a little bit scared because it’s my first experience with eruptions like that," he says. "For now I think I'm safe. But we never really know what's going to happen. I've been reading about the history of this volcano and it's not going to make a big, big eruption — I hope. I hope, because you never know.”

The dramatic photos of the eruption demonstrate the power of Villarrica volcano.

“We woke up about 3 a.m. There was some yelling and screaming out on the street, car alarms going off," says Chris, a Canadian tourist staying at Reyes' hostel. "We looked out the window and saw the top of the volcano. Bright orange. It was spewing lava and shooting ash up in the air, pretty high."

Chris says the guests gathered on the patio to watch the ash and lave spew forth from the volcano.

"It was pretty awe inspiring. We weren't sure whether we should be packing our things and getting out or not, having never been through that kind of experience before, but it was more of a sense of awe than fear," he says.

Texan Elissa Moore says she woke up when a neighbor came and knocked on her door.

"[The neighbor said] ‘you need to go look out the window! Look out the window!' It was pretty impressive and way bigger than we were expecting," she says. "We quickly put on jackets and went out on the balcony. ... The smoke and ash was luckily being blown in the other direction from us, so I didn't really feel any danger."

“It was just one of those once-in-a-lifetime opportunities,“ she adds. “I don't think many people get the chance to see a volcano erupting. Nature is so powerful and to be able to see that was amazing.”

Though Moore doesn’t plan to leave until Friday, she's already thinking about a quick exit strategy if it becomes necessary.

“I think we’re probably going to pack up all our stuff ahead of time, just in case we have to evacuate."

A photo collection of past eruptions at #Villarrica #volcano: http://t.co/qN7JVC1gvI photo taken 1949. pic.twitter.com/eC0WpEMn7a