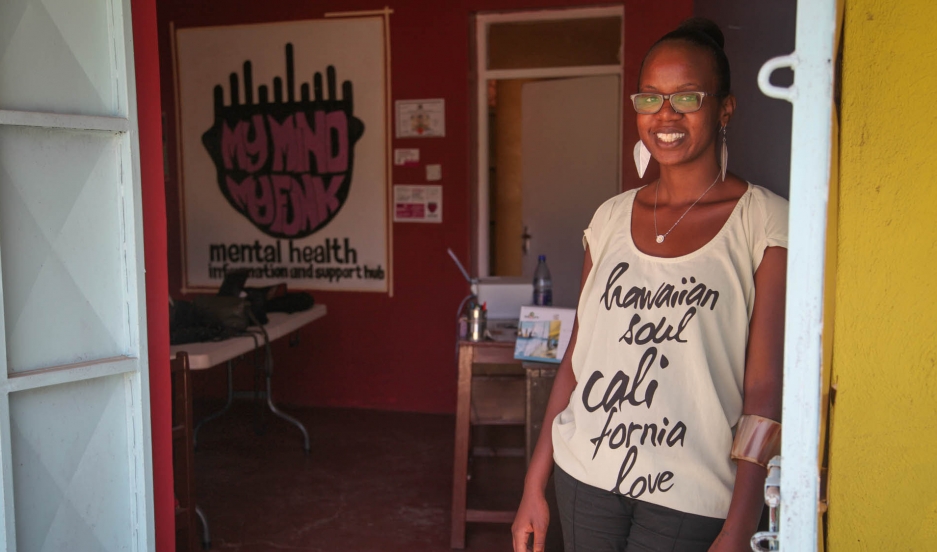 Sitawa Wafula stands outside her office outside Nairobi.

Emily Johnson for The World

Sitawa Wafula had two strikes against her. But the Kenyan woman is making a huge difference for thousands in her nation in an area that receives scant attention: Mental health. Despite suffering from bipolar disorder and epilepsy herself, Wafula has been able to create a route to help others.

According to the Africa Mental Health Foundation, there are only 79 working psychiatrists in the East African nation. That’s one for every 500,000 people. Short of training more, Wafula wanted to find a way to make mental health resources more widely available.

Want to do something?

Reach out to Sitawa's My Mind My Funk, or check out these other Kenyan organizations that she says are doing good work on mental health needs: Basic Needs and Youth on the Move.

In September 2014, Wafula launched an SMS-based helpline called “My Mind My Funk.” People can text in for free from any mobile network. General inquiries get an automated response, but desperate or suicidal messages are answered with a call from a licensed therapist.

Wafula knows all too well what it’s like to have no one to turn to for help. She was diagnosed with epilepsy, a condition that's often stigmatized in Kenya, when she was a teenager. Then a sexual assault sent her into a downward spiral.

“I got really, really depressed. I was suicidal. I didn’t have anyone to talk to tell what had happened to me,” Wafula says, speaking at her small, bare office in Ngong, a town on the outskirts of the capital city Nairobi.

As she began learning how to manage her conditions, Wafula says she found an outlet and through it, a purpose.

The AFHF is one of the few organizations in Kenya solely dedicated to providing innovative research and advocacy in mental health, and they are looking for student interns to assist with future research.
Collaborate with AMHF

“I started writing, and to me, every day I opened a new page it was like a new lease on life, where there was no judgment because it was just a plain piece of paper,” she says. Eventually she started a blog, and people started responding to her honesty about her condition.

Wafula’s blog also caught the attention of Google Africa when she entered and won the Africa Connected competition, for people who have used the Web to transform lives. She used the $25,000 prize to start My Mind My Funk. She also teaches free courses on mental health and epilepsy in Ngong, near her office, and in Nairobi’s Kibera slum.

With many of Kenya’s young people struggling to find work, financial problems are a common refrain among the nearly 13,000 people who have texted My Mind My Funk since its launch. One such person is Kobia Koome. An illness left him mostly blind at the age of 19. Four years later he had nearly given up hope of a career.

Have you had trouble accessing mental health services? Share your story with us.

“I found myself alone and wanted to take away my life, and it didn’t happen because of My Mind My Funk,” says Koome, who recently graduated from the East Africa Media Institute with a degree in Mass Communications.

You can find @SitawaWafula on Twitter leading a conversation under #mhke for “mental health Kenya,” taking on stigma and loneliness one tweet at a time.