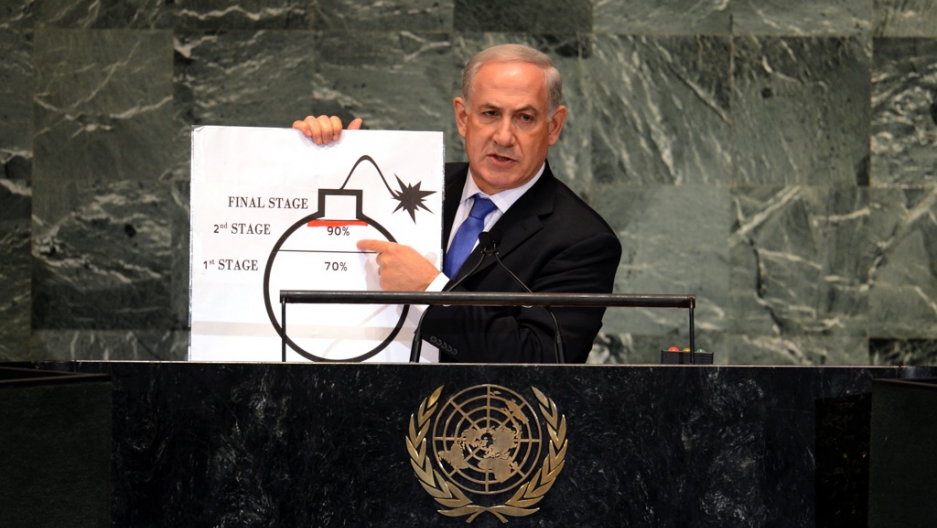 Update: Bibi's speech was filled with grim warnings about Iran and slammed Obama's proposed nuclear deal. There were lots of standing ovations in the chamber, and Bibi broke out some expressions we didn't anticipate, including "three tentacles of terror," "you can Google it," "deadly game of thrones," "nuclear tinderbox," "Persian bazaar," "gobbling up," "he tweets," and "hide and cheat." Scroll down to see how we scored the drinking game. If you were following along, you had somewhere between 30 and 50 drinks, depending how generous you were in your interpretations.

Bibi's going to Congress today. Put on your drinking caps.

Israeli Prime Minister Benjamin Netanyahu is in Washington, DC on what he's calling a "fateful, even historic, mission." The mission: Speak before both chambers of the US Congress to explain the dangers of US President Barack Obama's ongoing nuclear negotiations with Iran, and urge the House and Senate to approve new sanctions against Iran despite Obama's promise to veto any new sanctions.

The "mission" has made lots of people very angry.

In the United States, critics think the speech is a case of inappropriate and disrespectful political gamesmanship by the GOP, and of opportunistic and disrespectful meddling by Bibi. His invitation to speak came not from Obama, but from Speaker of the House John Boehner, who didn't bother asking the president whether it was cool to have a foreign leader show up to Congress and deliver a kind of State-of-the-Union address about current US foreign policy. The Obama administration considers it a breach of diplomatic protocol and US National Security Adviser Susan Rice warned that it was "destructive to the fabric of US-Israeli ties."

Critics in Israel, for their part, worry that Bibi's using the speech to score political points ahead of March 17 elections, and that he's willing to harm US-Israel relations — while shoring up support among American conservatives — if it means electoral victory at home.

More than 30 Democratic lawmakers are skipping the speech. So is Obama, who says it would be inappropriate to meet with Netanyahu so soon before Israeli elections. (Oh, that's the only reason?)

What's Bibi going to talk about? Definitely Iran, probably the Islamic State, probably his country's special friendship with the US, maybe this summer's Gaza war, and some other stuff.

To survive this stressful political moment, you'll need a drinking game. Who cares if the speech is on at 11 a.m., DC time, and you might be at work? So what if you haven't even had your coffee yet? Okay, fine. There doesn't have to be alcohol in your drinks. But the game doesn't work very well without it.

Bibi speaks during a bilateral meeting with Obama on Sept. 21, 2011 at the United Nations in New York City.

Emphasizes his "respect" for Obama and for the office of the president — 1 drink — 1 DRINK, BUT MAYBE MORE FOR GOING ON AT LENGTH

Mentions "bipartisan" support for Israel among US lawmakers — 1 drink (+1 bonus for the phrase "both sides of the aisle") — 2 DRINKS AT LEAST, SAME AS ABOVE, PLUS THE +1 BONUS FOR "SIDES OF THE AISLE"

Explains what ISN'T the purpose of the speech, such as, ya know, undermining the US president — 2 drinks — 2 DRINKS

"Stronger than ever" — 2 drinks

Says US support for Israel is "steadfast" — 2 drinks

"Common values" — 1 drink — HALF A DRINK FOR "COMMON DESTINY"

Standing ovation (Republicans only) — 1 drink — HARD TO TELL, YOU PROBABLY DRANK ENOUGH THOUGH

Standing ovation (Democrats only) — 3 drinks — 3 DRINKS, FOR SOMETHING POSITIVE BIBI SAID ABOUT OBAMA

Standing ovation (whole chamber) — 0 drinks, have some water and stay hydrated because this is going to take a while — YOU STAYED VERY HYDRATED

Standing ovation (partial, not fully committed, ambivalent) — 1 drink — 1 OR 2 DRINKS, DEPENDING ON YOUR PERSPECTIVE ON ENTHUSIASM

John Boehner cries — 1 drink, throw something at TV — WASN'T ON CAMERA MUCH BUT YOU COULD PROBABLY HAVE A DRINK OR TWO HERE

Bibi claps along as audience applauds him — 3 drinks

Notes "important differences" between US and Israel — 1 drink

Waves from podium — 1 drink — 1 DRINK PER WAVE, OR PER WAVING EPISODE? WE SHOULD HAVE BEEN CLEARER

In this handout provided by the Israeli Government Press Office, Bibi and his wife Sarah leave Tel Aviv on their way to Washington, DC, on March 1.

Refers to Jerusalem as "eternal and undivided capital" — 2 drinks

Promises never to "waver" in the face of adversity  — 2 drinks — JUDGMENT CALL, NO "WAVER"

Refers to David, Isaac, and other Jewish patriarchs and matriarchs — 4 drinks — EIGHT TOTAL DRINKS FOR ESTHER AND MOSES

GAZA (WILL HE BRING IT UP?)

A Palestinian girl walks on the rubble-strewn ceiling of her family's home after she and other members of her family returned to their partially destroyed house early on Aug. 27, 2014 in Gaza City's Shejaiya neighborhood.

Uses the hypothetical: "What would you do if rockets were being fired into your country?" — 2 drinks

Iran's supreme leader Ayatollah Ali Khamenei on the left, and the country's president, Hassan Rouhani on the right.

Compares Hamas to the Islamic State (IS, ISIS or ISIL) or Al Qaeda — 1 drink — 1 DRINK

Says something about "ideology" — 1 drink — 1 DRINK

Says (as he did in his speech to AIPAC on Monday) that Israel has been surrounded by an "Arab noose" — 4 drinks, then splash cold water on your face

Says, “Iran’s nuclear capabilities must be fully dismantled,” speaking slowly, emphatically, and while pounding the podium with his index finger — 6 drinks

Bibi uses a diagram of a bomb to describe Iran's nuclear program at the United Nations General Assembly in September 2012.

If Bibi uses props, shotgun one beer. Shotgun two beers if he uses clip art to illustrate a point about existential threats to his country — WE WERE ALL DISAPPOINTED, UNLESS YOU CONSIDERED HIS LARGE STACK OF PAPERS A PROP