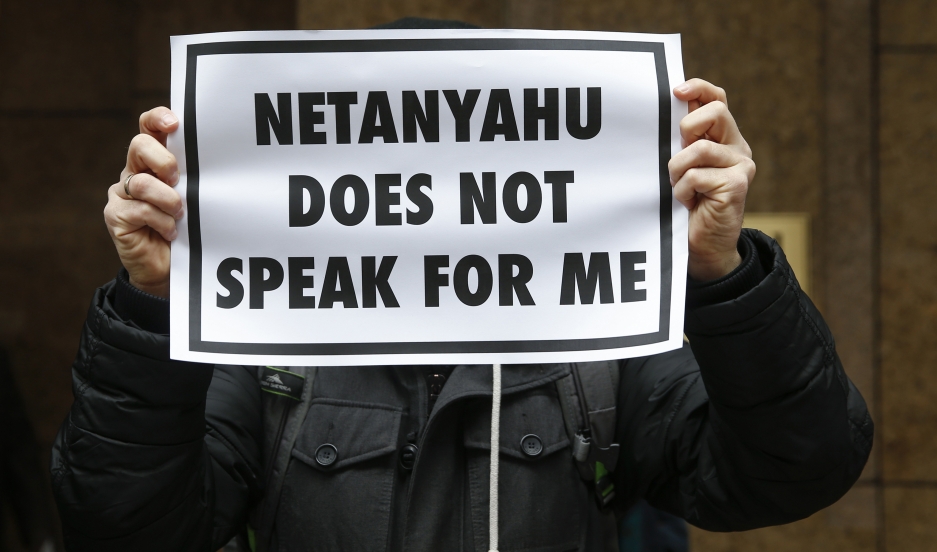 A demonstrator holds a sign during a rally near the Israeli Consulate in New York to protest Israeli Prime Minister Benjamin Netanyahu's speech in front on Congress.

If you put five Jews in a room, the old joke goes, you get six opinions. So it's no shock that Benjamin Netanyahu's speech to Congress has strongly divided opinions among Jews living in the United States.

"There is a division," says Alan Lowenthal, a Democratic congressman from California. "I think that it's unfortunate that all of us who were one time on the same page were forced to make choices."

More than 50 Democratic members of Congress, including six Jews, skipped Netanyahu's speech on Tuesday. Lowenthal says he wrestled with the decision and decided to attend, but he's angry that the speech has pitted Democrat against Republican, Jew against Jew.

Many liberal American Jews agree with Lowenthal. "We published an ad in the New York Times that was signed by 2650 people. It says, 'No, Mr. Netanyahu, you do not represent American Jews,'" says Rabbi Michael Lerner, editor of Tikkun Magazine, a progressive Jewish quarterly.

Lerner is not a fan of Netanyahu in the best of times, and hasn't been for decades. But he says his criticism has mostly been about Netanyahu's policies, not his behavior. This time, though, he says Netanyahu has gone too far.

Netanyahu also faced some criticism from American Jews — like Abe Foxman, the head of the Anti-Defamation League, and Dov Zakheim, a Pentagon official under two Republican presidents — who normally remain close to Israel's positions in public.

Of course, there's another opinion. Mitchell Bard, who runs the American-Israeli Cooperative Enterprise, says he was against the speech, finding it too provocative. But he does "think we'll see that it will pass over, as most of these past disagreements have, going back to ... 1947 when the Secretary of State opposed the creation of the state of Israel."

Bard also thought the speech was a good one, one that laid out an alternative path that would increase protections for the Jewish state.

Netanyahu urged Congress not to let Iran keep any nuclear enrichment capability unless they agreed to more concession than they reportedly have. For starters, he said, stop threatening Israel and supporting groups that fire rockets into the Jewish state. Bard said that would be progress.

And most American Jews would likely agree those are reasonable goals — even if they were peeved by Netanyahu's chutzpah.