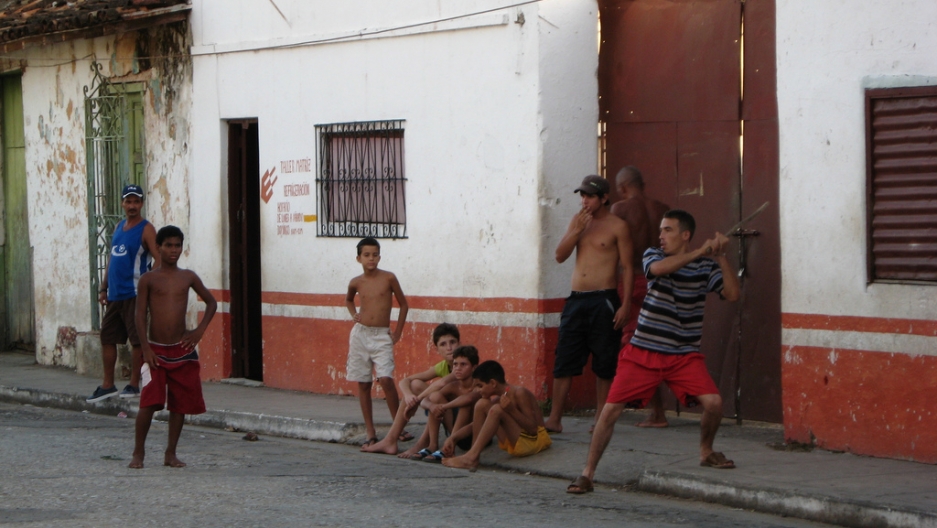 Children playing baseball with a stick and bottle top in Trinidad, Cuba.

The Red Sox just dropped a huge sum of money on Cuban prospect Yoan Moncada, outbidding the Yankees for the promising, switch-hitting infielder. Moncada is the latest Cuban to be signed by a major league team and the first to take advantage of a new policy easing the process of signing Cuban players.

This follows the more general warming trend between the US and Cuba that could ultimately change the strange, sad, and corrupt process that’s defined the US-Cuba baseball pipeline in recent years.

In Cuba, the average player makes about $40 a month. But if a player can make it to the US and get signed by an MLB team, he might earn millions of dollars right off the bat.

“If you were to add up all the Cuban baseball defectors and the Cuban boxers, the contracts they’ve signed over the past five years or so probably would total half a billion dollars,” says Joe Kehoskie, a baseball consultant and former agent who worked mainly in Latin America during the 1990s and 2000s. During that time, he helped a number of players defect from Cuba.

Major League Baseball loves Cuban players, in part because Cuba has historically produced some incredible ones, especially in the last 15 years. And recently, Cubans have been scoring some major contracts with MLB teams.

One of these new Cuban baseball stars is first baseman Jose Abreu, who left Cuba with a smuggler. Four months later, he had signed a contract with the Chicago White Sox for six years and worth $68 million dollars, which proved to be a bargain based on his production in 2014. Later in 2014, baseball players Yasmany Tomas and Rusney Castillo also left Cuba. Castillo ended up signing a contract with the Red Sox for $72 million. Tomas signed with the Diamondbacks for $68 million.

The crazy thing is that those last two — Castillo and Tomas — weren’t even half as good as Jose Abreu, even though they were paid millions of dollars more.

“When you adjust for ability, it almost comes to 100 percent inflation rate in that market,” Kehoskie says.

This isn’t the case in other baseball-obsessed countries like the Dominican Republic and Venezuela, where the teams can hunt for players via MLB-affiliated training camps and having scouts and agents like Kehoskie track the progress of young prospects. Once those players hit a certain age or talent level they can be scooped up and brought to the US. This happens all the time. But in Cuba, the government has placed extreme restrictions on where their baseball players are allowed to play, how much they’re allowed to make, and how long they can participate in non-Cuban leagues. Unlike, say, the Dominican Republic, Cuba wants to keep all of its players inside Cuba. This, says Joe Kehoskie, makes Cuban players rare and valuable.

Not to mention, they have to be willing and able to defect.

Some of the successful defection stories are amazing in their simplicity. Kehoskie recalls the summer of 2000 at the World Junior Baseball Championships in Edmonton, Canada, where he helped a few kids defect — including one in the middle of the game.

“He told one of the coaches he had to go to the bathroom so he looped off the field behind the stands and we were sitting there in a car and he hopped in and off we went,” Kehoskie says.

But that was in 2000. Since then, the market has gotten more complex. A network of agents, smugglers and even Mexican cartels help players defect.

“The defector market went from a situation in which players would travel abroad with a Cuban national team and defect at a tournament, walk away from a hotel, that sort of thing, to being a business that is almost entirely run and operated by human traffickers,” Kehoskie says.

With Cuba and the United States beginning to re-establish diplomatic ties, it makes sense that the underground athlete pipeline would become unnecessary.

“As soon as the United States and Cuba normalize relations — particularly as soon as the embargo is lifted — that should immediately end the need for any human trafficker to be involved in the market at all. At least as it regards to athletes,” Kehoskie says.

But change in Cuba always comes slowly, and as Kehoskie points out, “At this point, there’s no indication that Cuba is willing to let its players leave en masse for professional sports leagues abroad.”

A previous version of this story misspelled Joe Kehoskie's name.