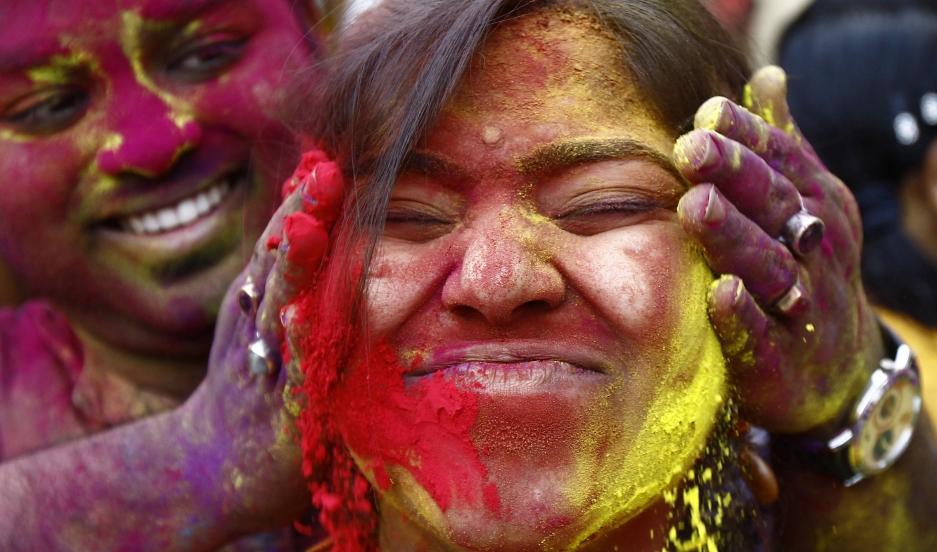 A student of Rabindra Bharati University reacts as her fellow student applies colored powder on her face during celebrations for Holi in Kolkata.

Seeing The News: People in India, like many around the world, are ready for spring. And that means one thing for many on the subcontinent — the Holi festival, aka the Festival of Colors.

Before the droves of people get to participate in Holi, they might have to endure the craziness of the commute in New Delhi. Good luck finding a seat. Heck, good luck finding a place to hang off the side. Amazing pictures though.

'Morning commute in New Delhi' The story behind the eye-popping #AFP picture by @Money_Sharma http://t.co/OEo8pg7gO2 pic.twitter.com/qWRtRKifVW

The difficult (i.e. crazy) morning commute in India is well documented. What's not usually photographed is peace and quiet on India's streets. Does that even exist!? Photographer Johnny Haglund attempted to find out.

#Canon Explorer Johnny Haglund seeks out a quiet side of India. But does he succeed? Find out! http://t.co/W1GkPYcajJ pic.twitter.com/YT6EQG4rhQ

One place where life is definitely not calm or peaceful is in Syria. But Reuters photographer Hosam Katan managed to snap a shot of these rebel fighters from Al-Sultan Murad brigade grabbing a moment with their mobile phones near the frontline, north of Aleppo.

Online on the frontline: Rebel fighters of 'Al-Sultan Murad' brigade use their mobile phones in Syria pic.twitter.com/0b0ip03l89

Seeing The News is a periodic selection of arresting visual topics around the world. What have we missed? Let us know in the comments, or tweet @sdavy with your tips.