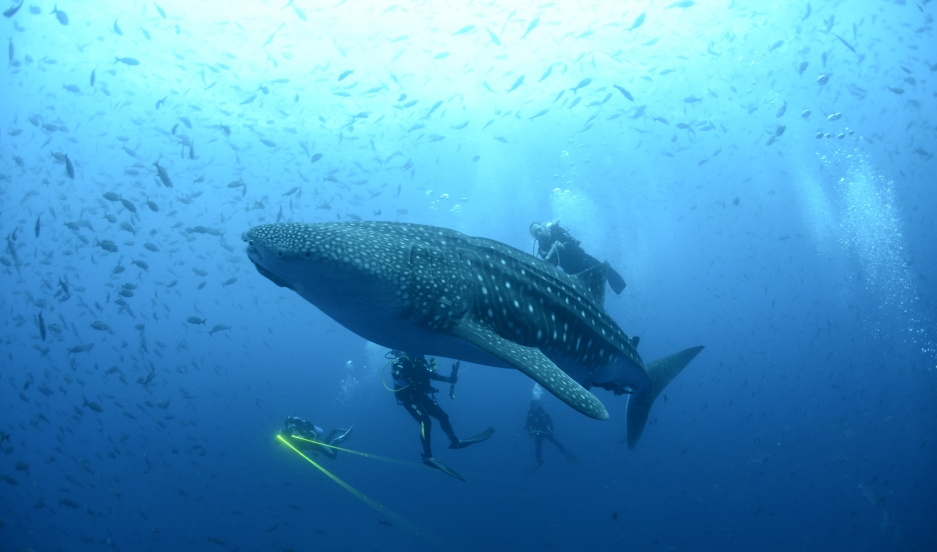 A whale shark is seen in the Galapagos Islands in this September 5, 2012 picture released to Reuters.

The next time someone tells you to stop posting vacation pictures on Facebook, set them straight: Scientists are now using images from social media sites to help identify and track wildlife species.

This kind of online collaboration is being used to protect whale sharks, the largest fish in the world. Whale sharks are in danger of going extinct because of hunting, pollution and habitat destruction. Every shark has a unique spot pattern, much like the fingerprints of humans, so public photos of them can be used for individual identification.

In recent years, marine scientists in the Philippines have used "citizen science" contributions to identify and match previously tagged whale sharks. According to the Large Marine Vertebrates Project, or Lamave, there are more than 700 individually-identified whale sharks in the Philippines, 79 of which were identified through social media submissions by tourists, dive operators and conservation expeditions.

Since it started work in 2012, Lamave has already identified 30 new whale sharks using social media. This method is effective as well as being free. The group says such projects promote responsible tourism, but says the public should still be aware that photographing whale sharks, seemingly a harmless interaction with the animals, can cause harm to them and their habitat.

Mong Palatino: How can social media tools contribute in the effort to protect whale sharks?

Jason Holmberg: More and more people are posting their whale shark videos online, and YouTube and Vimeo are proving to be very rich social media platforms for us! Last year 12 percent of our data came from YouTube and resulted in the tagging of an additional 100 new sharks.

MP: How do citizen science platforms like Wildbook contribute to the work of scientists and environmentalists?

JH:  Wildbook is helping scientists collaborate online in studying wildlife populations. Importantly, different research communities for different species are benefiting from each others’ investment in Wildbook as free and open source software. It also provides an avenue for data from the public to flow into structured wildlife studies.

MP: What are the challenges facing citizen science? How can we improve or encourage greater public involvement to support projects like Wildbook?

JH: Researchers need more engaging tools such as game-like techniques to hold potential citizen scientists’ attention and increase data collection while [turning] that data into structured studies and databases where the data is usable and searchable. For whaleshark.org, the public can help by either financially supporting the project through adopting a shark under study, or by spreading the word that we need the public's photos and videos of whale sharks and that their contribution of data makes a difference and is directly used in research.

At least one scientific paper acknowledges “publicly sourced data allowed for the accurate estimation of abundance of whale sharks.” Hopefully, this will encourage more tourists and divers to take photos and videos of wild sharks and submit them to marine scientists and environmentalists.

This story by Mong Palatino was originally published by our partner Global Voices Online, a community of bloggers from around the world.