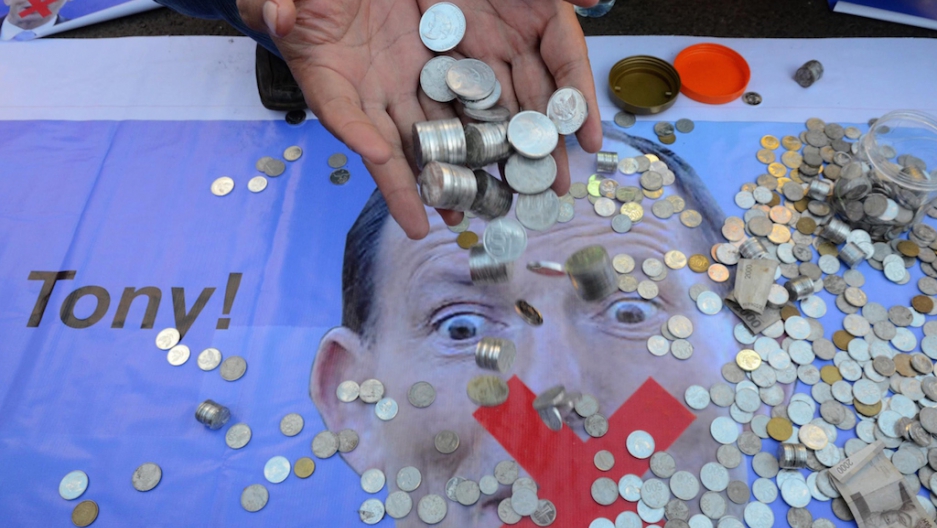 An Indonesian man makes a donation to Australia's Prime Minister Tony Abbott in Jakarta, as a protest to Abbott's remarks on tsunami donations from Australian government. Foreign Minister Julie Bishop called on Indonesia to give two Australians on death row an "indefinite stay of execution."
Credit: Yanuar
Share

JAKARTA, Indonesia — It probably wasn’t the reaction Tony Abbott had hoped for.

Last week, in an eleventh hour bid to save two Australians on death row in Indonesia, the Australian prime minister thought of reminding Indonesia of all the nice things his country had done for its neighbor.

“Let's not forget that a few years ago when Indonesia was struck by the Indian Ocean tsunami, Australia sent a billion dollars worth of assistance,” Abbott said on Wednesday.

“I would say to the Indonesian people and the Indonesian government: We in Australia are always there to help you and we hope that you might reciprocate in this way at this time.”

Unsurprisingly, this didn’t go down well in Indonesia, where his response was seen as churlish.

The angry backlash against Abbott’s comments started in Aceh, where 170,000 were killed in the 2004 tsunami. Several organizations launched a campaign to “repay” Australia, and started collecting spare change in the streets. The outcry then made it to Twitter, where the hashtags #KoinUntukAustralia or its English equivalent #CoinForAustralia and #CoinForAbbott were trending over the weekend.

Some asked for Tony Abbott to “send the bill.”

Dont worry mates, we'll give you back your money Don't forget to send us the bill. #coinforabbott, #CoinForAustralia pic.twitter.com/pdgkr56BcX

Others asked him for his bank details:

Australia’s Foreign Minister Julie Bishop called Indonesia Vice President Jusuf Kalla in an attempt to cool things down. “I have made it quite clear that the prime minister was simply illustrating the point that Australia has been and remains a supporter, a close friend of Indonesia,” Bishop told Kalla, as she explained to the Australian Broadcasting Corporation.

“Certainly these comments were not any attempt to threaten Indonesia,” she also said.

“Threats are not part of diplomatic language and no one responds well to threats,” he told local media.

Andrew Chan, 31, and Myuran Sukumaran, 33, were arrested in Bali in 2005, and sentenced to death for attempting to smuggle eight kilos of heroin to Australia. The campaign to spare their lives has been massive in Australia, and condemnations have emerged from across the world. Six drug convicts were killed by firing squad in January and more foreigners including French, Brazilian, Spanish citizens also face imminent execution.

But the Indonesian authorities have stayed firm on their position of no clemency for drug dealers. President Joko “Jokowi” Widodo argues that Indonesia is in a “state of emergency” and needs “shock therapy” to fight drugs.

Endy Bayuni, senior editor of the Jakarta Post, says the Indonesian media has been overwhelmingly supportive of Jokowi in his war against drugs. “They’re basically driving the public opinion to support Jokowi’s decision to execute people on death row for drug trafficking,” he told GlobalPost.

There has been no national survey on the matter, but experts believe the Indonesian public widely support the death penalty for drug convicts.

NO MERCY for Drug Traffickers and Drug Dealers, because they are the REAL TERRORIST for the nations. #CoinForAustralia #KoinuntukAustralia

Bayuni agrees, but says that with the international criticism over drug executions, “the story has developed into a question of Indonesia’s integrity as a sovereign nation.”

Your money is nothing compared our dignity. We are at war with drugs! So, eat our coins soon! #CoinForAustralia #Coin4Abbott @TonyAbbottMHR

The #CoinForAustralia campaign, he says, is “a way of expressing frustration and anger” at what the general public “sees as an attempt by a foreign government to try to interfere in the legal process in Indonesia, which recognizes the death penalty.”

Caught up in this power struggle, the two Australians on death row seem to be trying to distance themselves from the debate.

Relatives of Chan and Sukumaran talked to the media outside of their Bali jail on Sunday.

While the two are “very grateful for the support and kindness shown to them by so many people,” they also ask for “everyone to remain respectful at this time,” their relatives said.

“Myu and Andrew love Indonesia, they have a great respect for the Indonesian people and its culture,” they insisted.

But while the executions have been delayed for “technical issues,” authorities haven’t left much room for hope. On Monday, Bali's chief prosecutor Momock Bambang Samiarso said the two would “very likely” be transferred to the execution site this week.