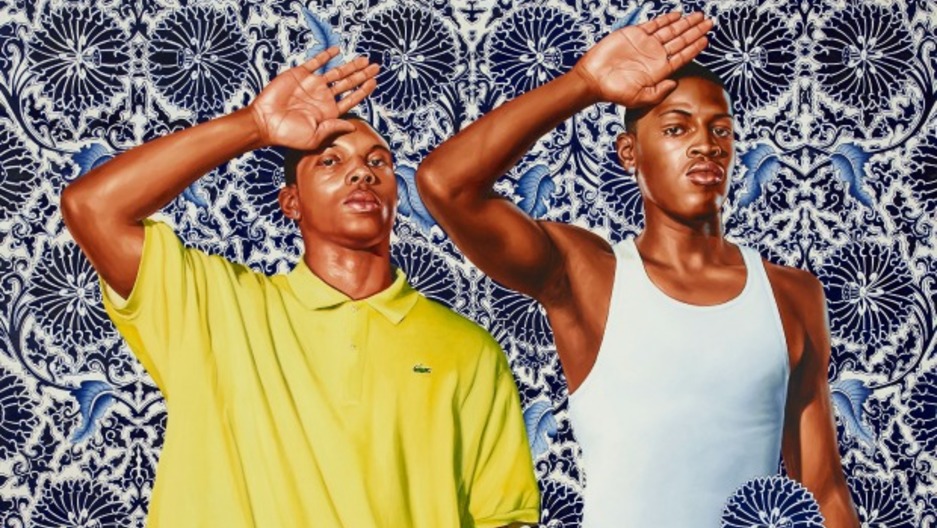 The paintings of contemporary artist Kehinde Wiley, the subject of an exhibition currently up at the Brooklyn Museum, look simultaneously old and brand new. He borrows heroic poses from art history titans like Jacques-Louis David and Peter Paul Rubens and recreates them with people of color wearing vibrant clothes, carrying swords, or riding horses, often set against flat backgrounds that mimic colorful textiles. Since 2000, Wiley has created a body of work that reflects wryly on the whiteness of art history.

Originally, Wiley found his models walking along the street outside the Studio Museum in Harlem, where hewas an artist-in-residence. "I was very interested in people who had an alpha-male presence, a sense of charisma and personal style," Wiley says. That charisma echoed the confidence that Wiley recalled from heroic paintings like David's "Napoleon Crossing the Alps.""So much of the history of painting is the propaganda of self-aggrandizement," Wiley tells Kurt Andersen. Producers at VH1 picked up on that theme in his work and asked him to paint the portraits of contemporary royalty --- musicians like Grandmaster Flash, LL Cool J, Salt-N-Pepa, Ice-T.

Wiley's earliest experience in the art world came as a kid growing up in Los Angeles, on visits to the Huntington Library. "There's a large collection of British portraiture," he tells Kurt. "That was really impactful for me, because of all the pomp and circumstance." What Wiley didn't see were other people like him --- either as museum visitors or as subjects of portraits. "By and large, when I went to the great museums of California, there weren't people who looked like me. By and large, I was the black kid." Through his monumental paintings, he's beginning to correct that imbalance.

"Kehinde Wiley: A New Republic," a mid-career retrospective of Wiley's work, is currently on view at the Brooklyn Museum.