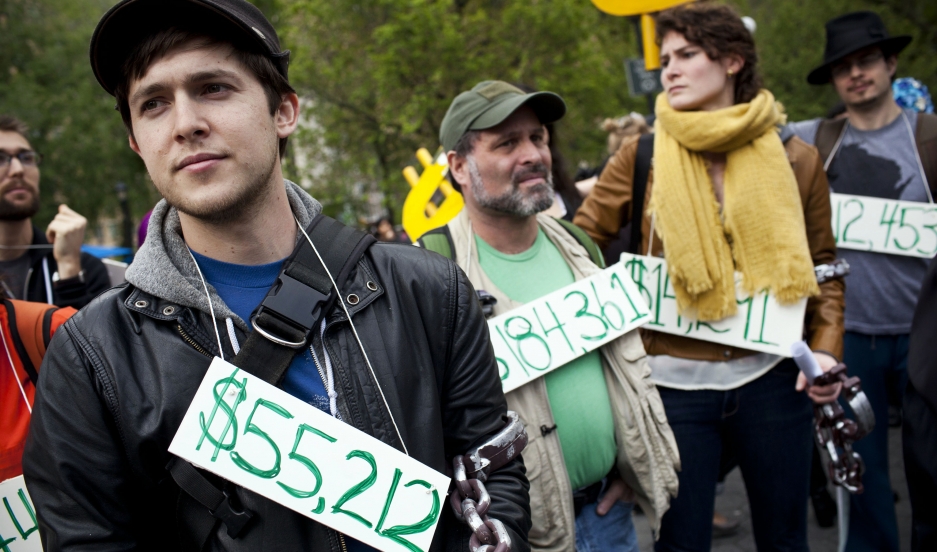 Occupy Wall Street demonstrators wear signs around their neck representing their student debt during a protest against the rising national student debt in New York on April 25, 2012.

This year, student loan debt reached a whopping $1.16 trillion, a new high in the United States. But now some student debtors are pushing back.

Fifteen students who took out loans to attend for-profit institutions owned by Corinthian Colleges, Inc., announced this week that they are going on a "debt strike." Their action, led by a national group called Debt Collective, is directed specifically against Corinthian. They say the company uses dubious legal and ethical techniques to attract students to its colleges so they can cash in on their federal loans.

“They were led into a debt trap,” says Ann Larson, an organizer with Debt Collective. “They owe tens of thousands of dollars, in some cases for a degree that didn’t lead to a job, and for an education that was substandard. This institution is well known for preying on people who are low income ... people who don’t have a lot of support networks in their lives and are looking for a way to improve their circumstances.”

Larson pointed out that Corinthian, which she called a "predatory institution," is also being sued by the federal government and several state agencies. The company, she says, is mostly funded by the public. The institution derives about 90 percent of its funding from tax dollars and the federal student loan program.

“For over two decades, they’ve taken money from a public source — student loans — and used it to enrich themselves, to enrich investors," Larson says. "Then the students were left holding the bag."

But she also says Debt Collective is making a broader statement about student debt as a whole. “There’s a [$1.16] trillion debt problem in the United States," Larson says. "These students are on the leading edge of taking the offense and saying, ‘We need to do something about this, we’re not going to wait for policy makers and elected officials to do the right thing. We’re going to demand justice.'”

Larson says the same trends that fuel Corinthian and other for-profit education companies can be seen in public higher education as well. As states slash their budgets and grants and endowments dry up, public colleges and universities shift the cost directly onto students, utimately forcing many to take out larger loans.

"For more and more middle- and working-class families, going into debt is the only way to get a college education,” Larson says. “It didn’t used to be that way, and it certainly doesn’t have to be that way. ... We’ve gotten into this mindset where it seems perfectly acceptable to spend tens of thousands of dollars and go into decades of debt to get a college degree. We really need to start rethinking that system.”

Many argue that taking on college debt will ultimately pay off in the long run, but Larson is skeptical of that argument.

“Who is successful in this case? A few investors? The Department of Education also makes a lot of money servicing student loans,” she says. “But the students are left with nothing — they are worse off than when they began.”

Yet young people continue to take on debt. In 2012, 71 percent of all students graduating from four-year colleges had student loan debt. That represents 1.3 million such students, up from 1.1 million in 2008 and 900,000 in 2004. Compare that to 1984, when about 410,000 college graduates of four-year institutions completed college with education debt.

And as student loan debt continues to mount, financial experts say we're starting to see the strain of all these loans elsewhere in the economy. The rate of homeownership among people in their 20s is falling, and student loan debt seems to be dampening overall spending among recent graduates too.

“People who have a lot of student debt don’t buy houses, they don’t buy cars. They’re very slow to start their own families, and thats a problem,” Larson says. “This is really a moral and ethical question also: Is it right to allow young people just starting out in life to take on more debt than they can ever repay?”

But beyond the Corinthian 15 and their debt strikes, how much leverage do millions of other students across the country have?

“There are risks to not paying your debt, and we wouldn’t suggest that anyone do that on their own. That’s why we’re trying to create unions, collectives and communities for people to support each other,” she says. “If you owe the bank $1,000, the bank owns you. But if you owe the bank $1 trillion, you own the bank.”