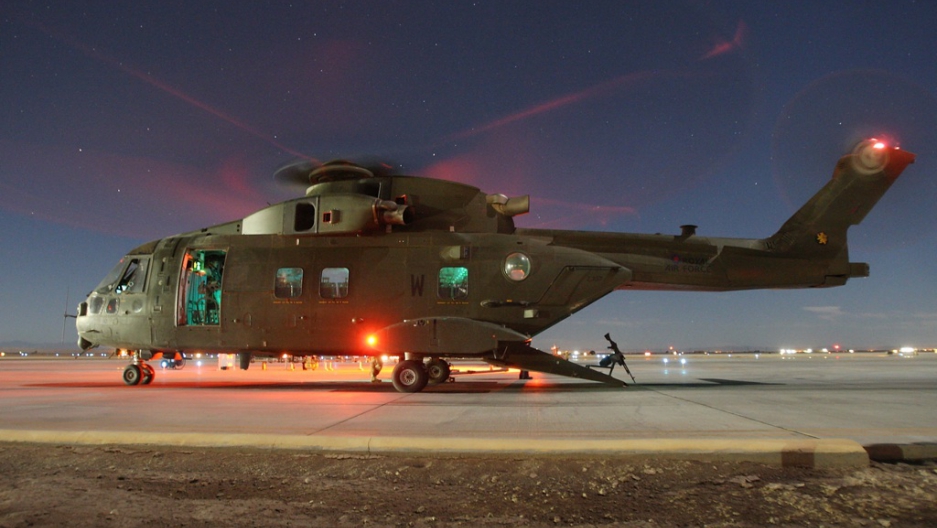 Members of the UK's Royal Air Force make a fuel stop after flying over parts of California as they undergo Merlin Helicopter training in 2009.
Credit: David McNew
Share

LONDON, UK — The arrival of 75 British military personnel in Ukraine in the next few days isn't exactly going to turn the tide of a deadly crisis that’s ruining the country geographically, politically and economically.

The eastern Ukraine war, which has killed nearly 5,800 people in almost a year, appears to have quieted down for the time being. Officials in the capital of Kyiv announced Thursday they’re pulling back heavy artillery from the front line.

So why is the UK suddenly interested in lending Ukraine a hand?

The British military medics and trainers are going to western Ukraine, some 800 miles from the eastern border where Russian-backed separatist rebels have been clashing with Ukrainian government forces. In the spring, they'll be joined by support troops from the United States.

The distance looks a little bit like stationing troops in Washington, DC, to stave off an invasion of Disney World in Orlando.

It's a deliberate move to ensure that Britain's show of support has no chance of morphing into an armed clash between a NATO army and Russian troops, even giving a bit of credence to Russian President Vladimir Putin's contention that Ukraine's army is just a "foreign legion" of the Western alliance.

Seen from a distance, the tepid deployment of a few dozen support personnel to an area far from the conflict looks like a hasty fix to recent accusations of a slow, confused and haphazard response from Britain — and Europe in general — to the crisis.

The news came as US President Barack Obama is grappling with whether to send weapons to Ukraine.

Britain and other European Union members have been "sleep-walking into the current crisis," according to a scathing report last week from the UK Parliament's House of Lords.

The EU and Russia: before and beyond the crisis in Ukraine

"The EU's relationship with Russia has for too long been based on the optimistic premise that Russia has been on a trajectory towards becoming a democratic 'European' country," the report said. "This has not been the case. Member states have been slow to reappraise the relationship and to adapt to the realities of the Russia we have today."

Russia expertise in individual member countries’ foreign offices has dropped sharply in recent years, the authors found. In the UK, this led to "quite a lot of complaint" at the time of Putin’s 2014 incursion into Crimea that no one in the Foreign Office could give any decent advice on what to do next.

That uncertainty has hovered over the European response ever since, with Western officials frequently appearing taken by surprise by moves from Russia, or even their own allies.

EU officials in Brussels weren't even aware of Britain’s troop commitment this week until contacted by reporters from the English-language Kyiv Post for comment — and, according to the outlet, "were unable to provide one."

The situation is a thorny political issue for British Prime Minister David Cameron. The elections are just a few months away, on May 7. If his Conservative Party wins again, Cameron has promised to hold a referendum in 2017 on whether the UK should leave the EU.

That promise makes diplomacy in Brussels a little awkward these days, leaving him open to the charge that Britain has taken a back seat on Ukraine.

Germany and France took the lead earlier this month on brokering the failed ceasefire between Ukraine and Russia in Minsk, Belarus. (A sign that a truce isn't really a truce: It took almost two weeks after the "ceasefire" was declared to have a single 24-hour period where no troops were killed.)

Cameron said it would be "miraculous" if their plan holds, but if he has a better one, he's keeping it to himself.

"I think it's obvious that the prime minister was seriously stung by the domestic political response to his absence from the Minsk diplomacy, and therefore feels compelled to take a strong position," Royal United Services Institute senior research fellow Shashank Joshi told The Guardian.

Military support aside, it's not clear anyone in Cameron's government knows exactly what that strong position should be.

Yes, Russia annexed Crimea, and yes, Ukrainian troops have surrendered the eastern city of Debaltseve. But the British leader says the separatists could target the eastern port city of Mariupol next — that's when the UK would get serious.

"People will be looking at Mariupol as the next potential flashpoint, and if that were to happen, I think the argument for further action would be overwhelming," Cameron said.

"I think what we should be putting into place is a sense that if there is another Debaltseve then that will trigger a round of sanctions that will be materially different to what we have seen so far."