The cast of the Sanskrit play, "The Cleverness of the Thief." Patricia Sauthoff is in the center, wearing white.

Sanskrit has been lingering at the edges of Western culture for a while now. It’s an obscure language that not many people know, but a lot of people know about.

I started studying Sanskrit as a written language a few years ago. Back then, when I told people about it, they assumed I was a big "White Album"-era Beatles fan or into Transcendental Meditation. Now they just assume I spend a lot of time doing yoga.

I'm actually a Ph.D. candidate at The School of Oriental and African Studies in London. I study Sanskrit so I can do research and read ancient texts, not order lunch or hail a cab. But last year my studies took a turn for the practical when I decided to take a conversational Sanskrit course over the summer.

Sanskrit is an ancient language, but it’s actually pretty easy to hear it out in the world — if you know where to look. India's 2001 census counted 14,000 Indians who claimed it as their mother tongue. There are Sanskrit language newscasts; I’ve seen Shakespeare and other plays performed in Sanskrit here in London; and there is a community of language learners and teachers from around the world who gather on Twitter to share their knowledge, ask for help, and meet others interested in communicating in Sanskrit. Some are in India, some are part of the Indian diaspora, and some — like me — are Westerners interested in learning something more about the language and culture of South Asia.

And it does look like interest in Sanskrit is growing. The study of Sanskrit is certainly surging in popularity, both in India and in the West. Students at Princeton Univerisity recently launched a petition to get Sanskrit back into the curriculum. And at my own school, the second-year Sanskrit course grew to 20 this year, up from just two the year before.

It turns out spending a month speaking Sanskrit day-in and day-out is pretty surreal. Instead of reading philsophy books, I learned how to say things like telephone — दूरभाष  dūrabhāṣā — and bicycle — द्विचक्रिका dvicakrikā. It reminds me that Sanskrit isn’t just a language of dusty books. And as anyone who has ever namaste-d knows, it’s a language that’s really fun to say out loud — or even to sing.

There were 20 of us in the class, learning, speaking and singing six days a week for four weeks. Several of my classmates were Indians living in Europe. Some were graduate students like myself, and others were professionals taking a break from work. There was even a Buddhist monk who out-chanted us all.

Much like any other intensive language course, we were expected to communicate only in Sanskrit. But where other immersion classes are for beginners, most of my classmates had years of experience reading the language. Of course, slowly translating a written work and rapid-fire conversation are completely different. Those who spoke Hindi, Bengali or Gujarati found the spoken Sanskrit a little more familiar than those of us who just read. 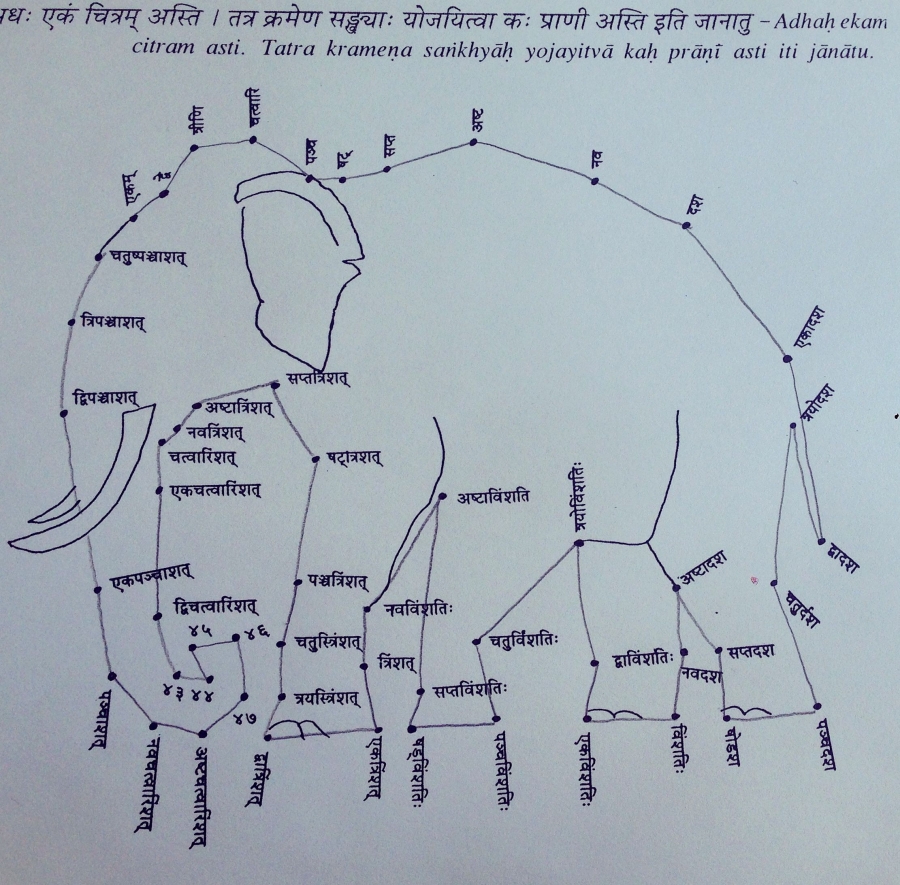 A connect-the-dots with Sanskrit numbers spelled out.

We learned to speak through traditional methods like singing and chanting, but also by discussing everyday things. We learned lines of ancient poetry and had a Skype chat in Sanskrit with a professor in Australia.

The students in my class were aware that the revival of Sanskrit is contentious. It's sometimes tied with the rise of Hindu nationalism. Events like the newly introduced Sanskrit Week are seen as privileging one language and culture over others. India’s second largest religion, Islam, does not have historical ties to Sanskrit. Even among Hindus, the country’s largest religious group, Sanskrit learning has historically been something for only the privileged castes. In the southern part of the country, languages such as Tamil developed simultaneously but separately from Sanskrit.

But in the classroom, we didn't discuss the current debates or the history of the language. Instead, we practiced for an upcoming performance of songs and a play for friends, family and the Indian ambassador to Germany.

Most of us study Sanskrit in order to read it, and learning to speak it was a challenge. My vocabulary includes a lot of technical philosophical terms that aren’t easy to translate into English, but it now also includes some useful everyday ones, too. I’m used to being able to slowly read complex books, but when it comes to quickly answering a basic question like कुशलम् अस्ति वा  kuśalam asti vā  — “How are you?” — I freeze.

After a month of class, I realized Sanskrit isn’t about self-expression for me. It’s about reading the ideas of the past. I’m glad I’ve gotten to experience it as a living language, but I’m more comfortable treating it as a dead one.

The World in Words podcast is on Facebook and iTunes. That's where you can also find a conversation with translator Terence Coe about Sanskrit's near-perfect alphabet.