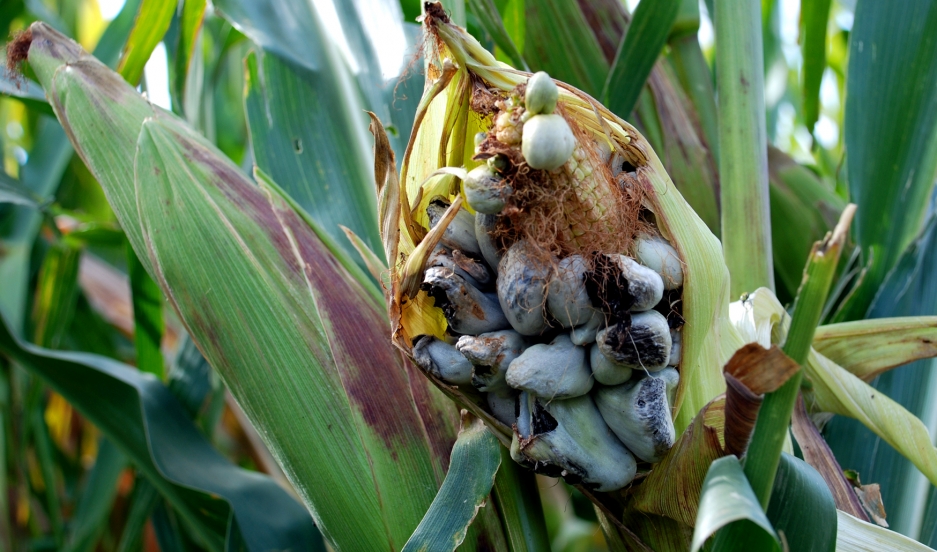 An unsightly fungal disease called corn smut strikes fear in the hearts of American and Canadian farmers. When it appears as fleshy, grayish galls on cobs, it can cause, in some cases, a 20 percent loss of marketable crop.

Yet, in Mexico, corn smut is a time-tested delicacy, known as huitlacoche (pronounced wheat-la-ko-chay). Ancient petroglyphs depict infected ears of corn, for instance, and indigenous subsistence farmers in Mexico and Central America ate the smut because they couldn’t afford to let a crop rot.

As it turns out, the hideous growth is nutritious and delicious, with a rich, aromatic flavor singular to the fungus (Ustilago maydis). Compared with corn, huitlacoche also contains a much greater amount of the amino acid lysine, which subsistence farmers would have been hard-pressed to find elsewhere. 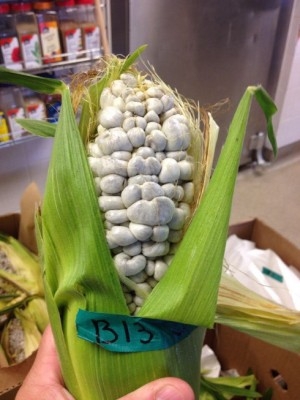 “Lysine is an essential amino acid [that appears] in extremely low quantities in cereal-based diets,” says Mexican biotechnologist Octavio Paredes López, who has worked on numerous studies on huitlacoche. What’s more, huitlacoche is “one of the foods with the greatest content of [lysine],” according to an article in the journal Revista Iberoamericana de Micología.

No one seems to know why huitlacoche never caught on farther north, says Parades López. But its popularity is starting to spread. Canadian molecular biologist Barry Saville, for one, has become smitten with smut.

Saville’s research at Trent University focuses on how to protect corn from fungal infections. But a few years ago, during a scientific conference in Mexico, he tried sautéed huitlachoche with scrambled eggs on corn tortilla. The fungus dazzled his taste buds.

Saville now sees food production in a new light. “People feel we must have absolutely pure, pristine produce without blemishes,” he says. But “even things we initially consider undesirable can be used to great benefit.”

For two years, Saville has been inoculating corn with the fungus on a half-acre plot in Peterborough, Ontario. He hopes innovative farmers can one day benefit from a corn smut market. “We prefer to call it corn mushroom or corn truffle when we’re talking about eating it,” he says. Tastes better that way.

Saville cultivates smut by injecting a liquid containing the fungus onto corn silks. The fungus then uses the silks to grow down into the kernels, where it fuses with the corn, resulting in a hybrid growth on the surface.

Researchers in Indiana cultivated smut a decade ago, according to Saville, but he hasn’t found any follow-through in terms of marketing the product. Saville is the first Canadian to foster the fungus; his version of smut combines a fungal richness with the sweetness of northern corn.

Saville’s huitlacoche has been a hit at La Hacienda, a Mexican restaurant in Peterborough. “People travel so much now and they are looking for unique, healthy foods that come from the land,” says La Hacienda owner and chef Sandra Arciniega. She has sold huitlacoche in quesadillas, tamales and soups.

Saville is also working with the culinary school at nearby Fleming College, which has created several recipes for private tastings and is working on a new concoction — a spreadable pate — for specialty shops.

Saville hopes that local farms will eventually adopt his inoculation methods and be able to harvest smut without his supervision. The market is there, he says. Indeed, a single infected cob can reap $8-10 (Canadian) — 16 to 20 times the price of regular corn. While Saville admits that “going to mass production is going to be somewhat difficult,” his goal is to one day see huitlacoche selling in large quantities in Canada. Good things can come in ghastly packages.

This story first appeared as a blog post from Science Friday with Ira Flatow.