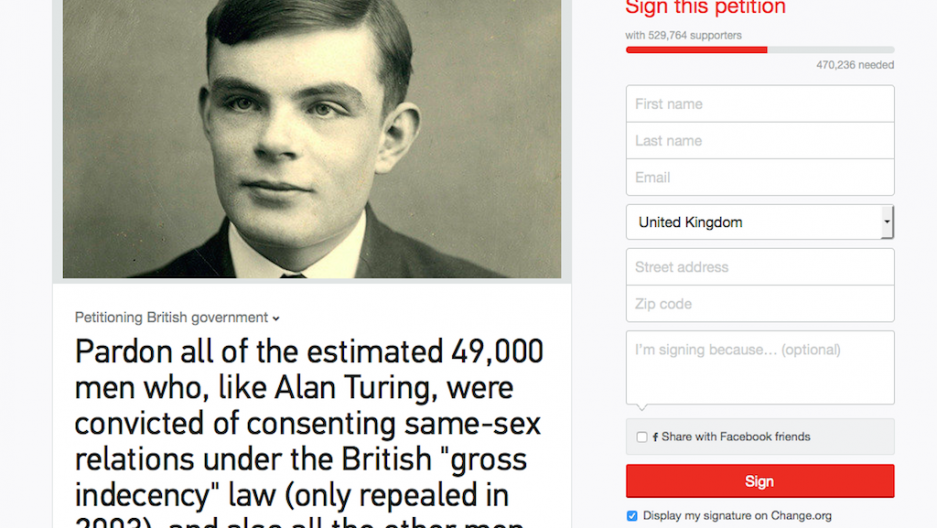 Alan Turing's family handed a petition with more than 500,000 signatures calling for all UK men convicted under the country’s "gross indecency" laws to be pardoned.
Credit: Change.org
Share

LONDON, UK — Amid the lame jokes and creepy John Travolta touching, this year’s Oscars ceremony had some political moments.

There was John Legend’s reminder of skyrocketing incarceration rates and the erosion of voting rights in the United States, after his win with rapper Common for best original song.

“Birdman” director Alejandro Gonzalez Inarritu used his best picture acceptance speech to appeal for cleaner politics in Mexico and better treatment of immigrants in the US.

And Graham Moore, the Oscar-winning screenwriter of the film “The Imitation Game,” received a standing ovation after a moving speech in which he encouraged alienated-feeling young people to “stay weird,” and acknowledged his own suicide attempt as a teenager.

But the politics of the “The Imitation Game,” at least, didn’t end at the stage.

On Monday morning, the family of Alan Turing — the famed English mathematician and codebreaker whose work led to modern computer science — went to the UK prime minister’s residence at 10 Downing Street.

They asked that the government officially pardon 49,000 men who, like Turing, were legally persecuted for having consensual sexual relationships with other men before homosexuality was decriminalized in the UK.

The family handed over a Change.org petition with more than 500,000 signatures calling for a pardon for all UK men convicted under the country’s “gross indecency” laws. Such a pardon could clear the records of some 15,000 men still alive today.

Homosexual acts between two men were decriminalized in England and Wales in 1967. However, laws against “gross indecency” and “buggery” — offenses generally applied only to gay men — officially remained on the books until 2003.

Turing, whose work breaking Nazi codes was key to Allied success in World War II, was convicted in 1952 of gross indecency following his relationship with a 19-year-old man. He was chemically castrated, and died of an apparent suicide two years later.

He received a royal pardon in 2013. His family and supporters now want the same for others.

Benedict Cumberbatch, the actor who played Turing in the Oscar-nominated film, and Stephen Fry, the British comedian who has campaigned for Turing to be placed on the 10 pound bill, signed an open letter in the Guardian newspaper last month calling on the royal family to extend the pardon to all men convicted under the laws.

“The UK’s homophobic laws made the lives of generations of gay and bisexual men intolerable,” the letter read. “It is up to young leaders of today including the Duke and Duchess of Cambridge to acknowledge this mark on our history and not allow it to stand.”