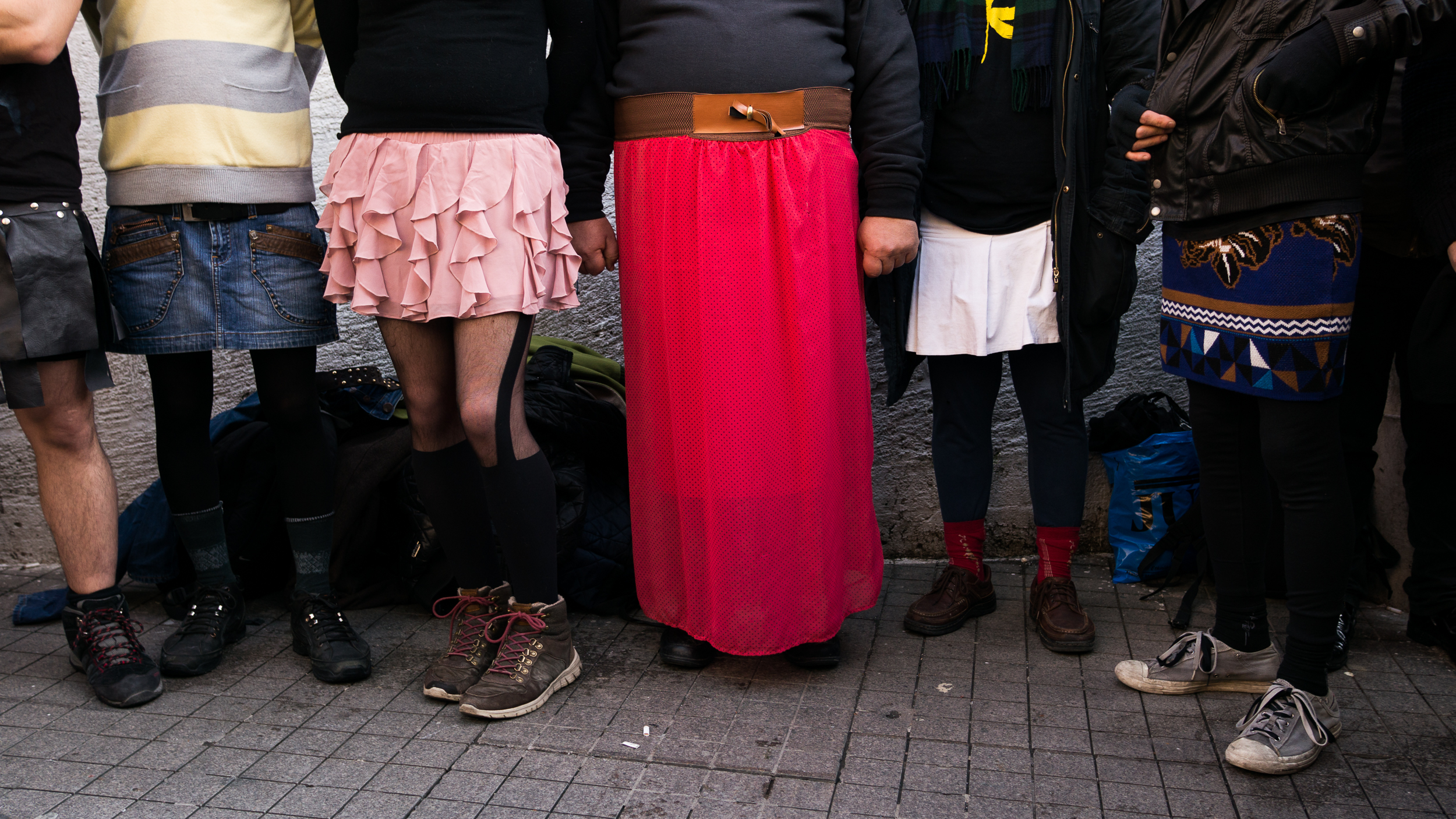 Men wear skirts in Istanbul to support women's rights and to honor the memory of Özgecan Aslan, a 20-year-old student whose murder set off a wave of protests across Turkey.

Public reaction to cases of violence against women in Turkey have tended to involve women's organizations alone. That changed over the weekend, as Turkish men — many dressed in miniskirts — joined protests in Istanbul and Ankara in the wake of the brutal murder of 20-year-old University student Özgecan Aslan.

Earlier this month, Aslan was the last passenger on her bus home when the driver detoured to a remote location, intending to rape her. When she fought back, the driver stabbed her to death, he confessed to authorities. His father and a friend allegedly helped dispose of her body, the burned remains of which were found in a riverbed on Feb. 13.

Thousands of women took to social media last week in response, using the hashtags #sendeanlat — or #tellyourstory — and #OzgecanAslan to share their own tales of experiencing violence in Turkey. They were joined by men in neighboring Azerbaijan last week, who showed solidarity with Aslan by dressing in miniskirts and posting their pictures on Twitter and Facebook, often with the message: "If a miniskirt is responsible for everything, if [wearing] a miniskirt means immorality and unchastity, if a woman who wears a miniskirt is sending an invitation about what will happen to her, then we are also sending an invitation!"

Over the weekend, men in Turkey posted similar pictures under the hashtag #ozgecanicinminietekgiy — meaning "wear a miniskirt for Ozgecan” — and some even took their skirts to the streets, joining several protests that swept the city.

Visit Julius Constantine Motal's website for more images from the protests and out of Turkey.
Photos Out of Turkey

Julius Constantine Motal captured some poignant moments from two such protests on Saturday.

The first protest took place outside of historic Dolmabahçe Palace (where Atatürk died), site of the Prime Ministers working office in Istanbul. Motal said there were women and men, old and young, holding photographs of Özgecan Aslan and signs that read: 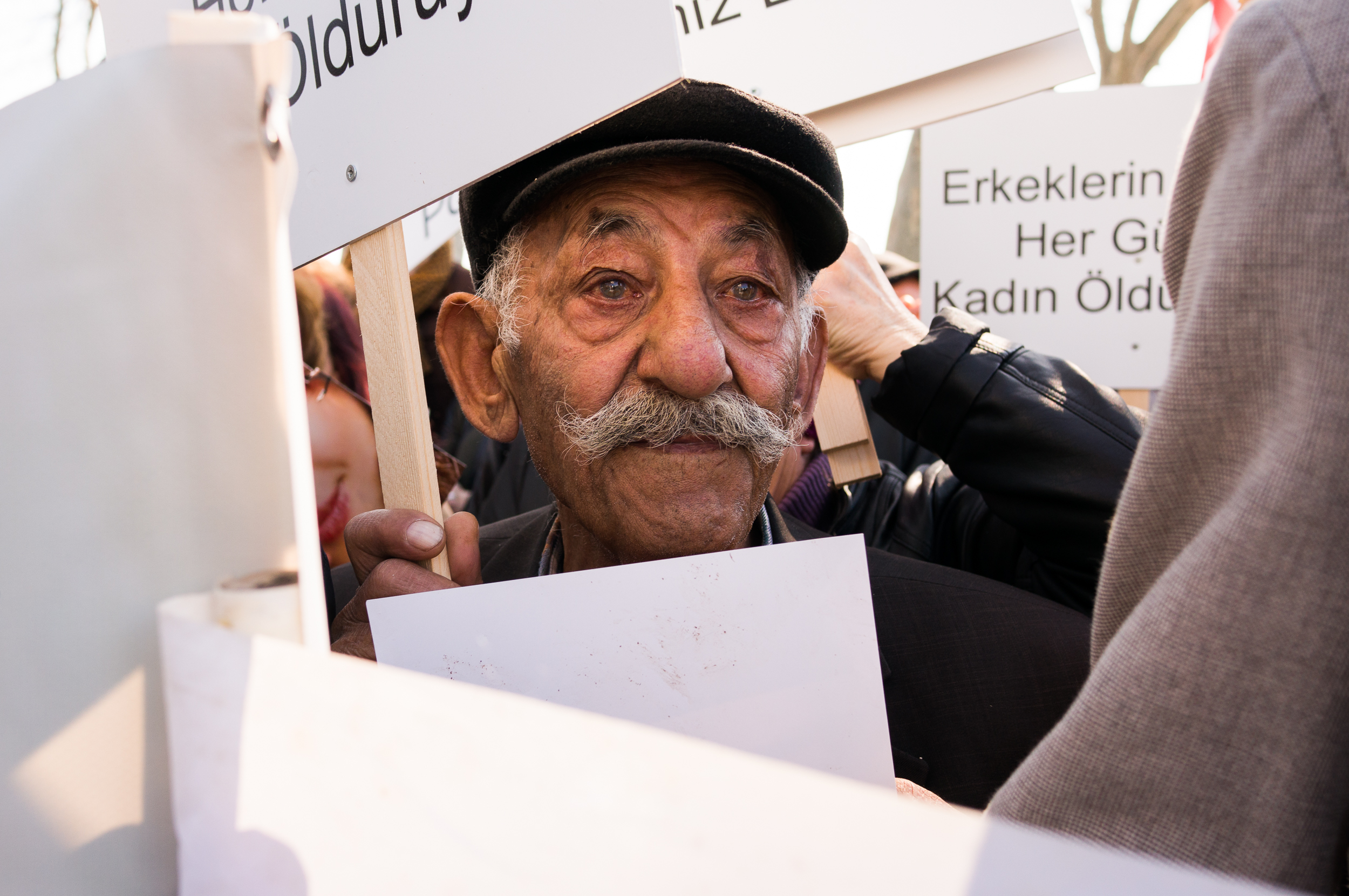 Feb. 22, 2015 - Istanbul, Turkey. A man holds a sign in a protest organized by the Beşiktaş municipality honoring Özgecan Aslan, a 20-year-old student who was murdered and burned after fighting the bus driver who tried to rape her. She was on her way home from school to visit her parents in the province of Mersin. 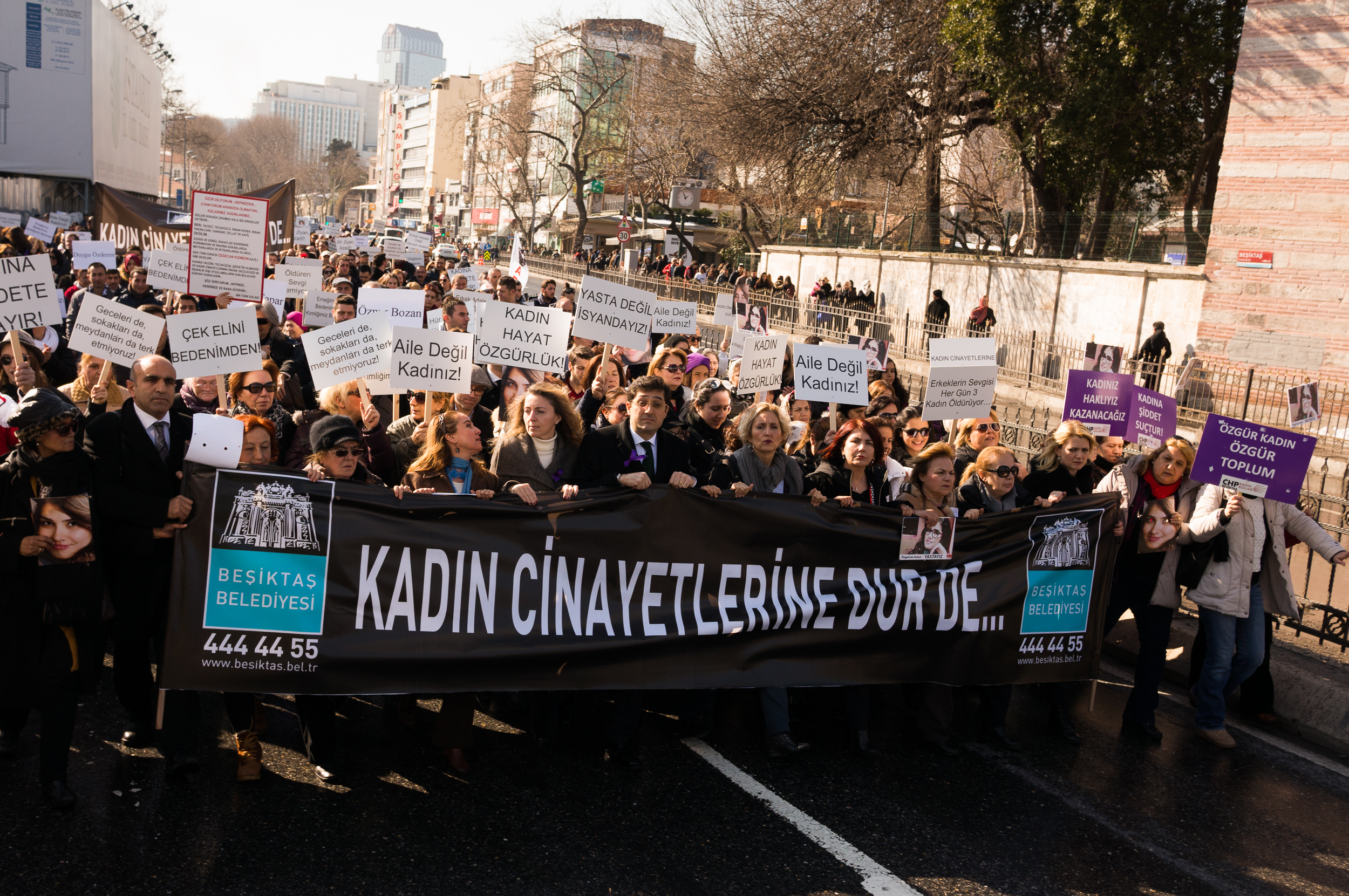 Feb. 22, 2015 - Istanbul, Turkey. People marched in a protest organized by the municipality of Beşiktaş. 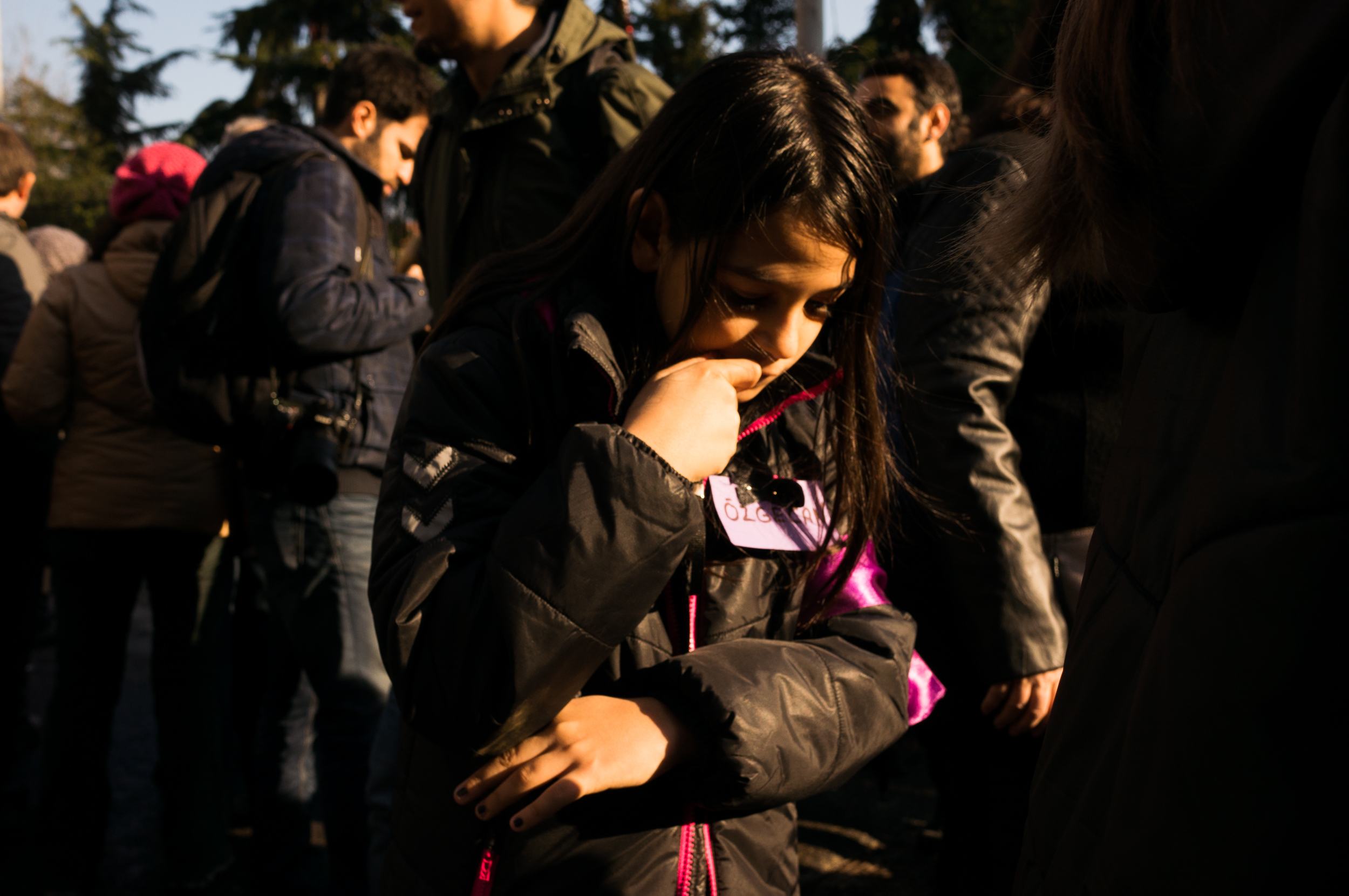 Feb. 22, 2015 - Istanbul, Turkey. A girl stands in the midst of a protest with a small sign that has Özgecan Aslan's first name on it. 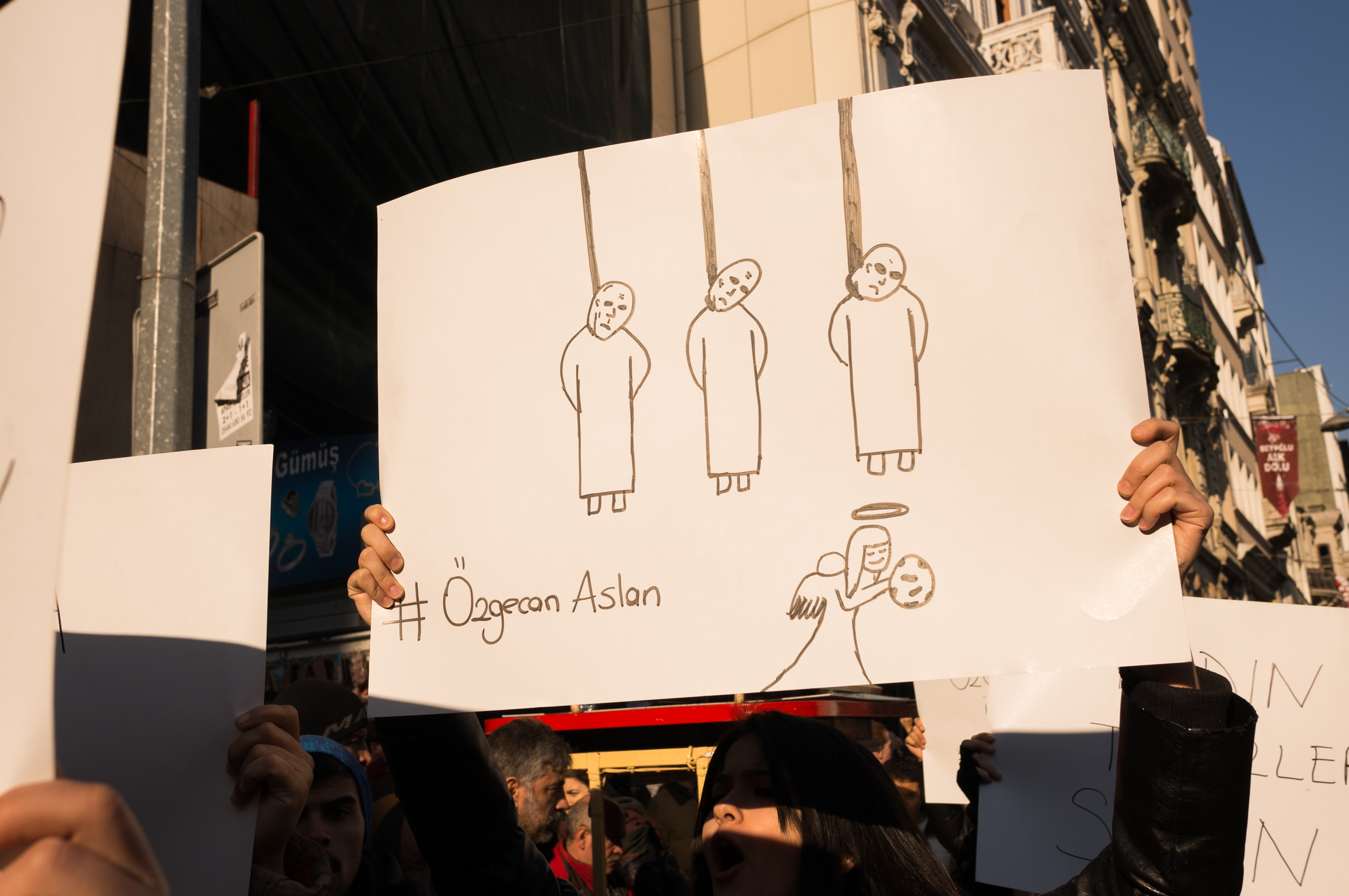 Feb. 22, 2015 - Istanbul, Turkey. A woman holds up a sign depicting the lynching of the three men who burned the body of Özgecan Aslan. 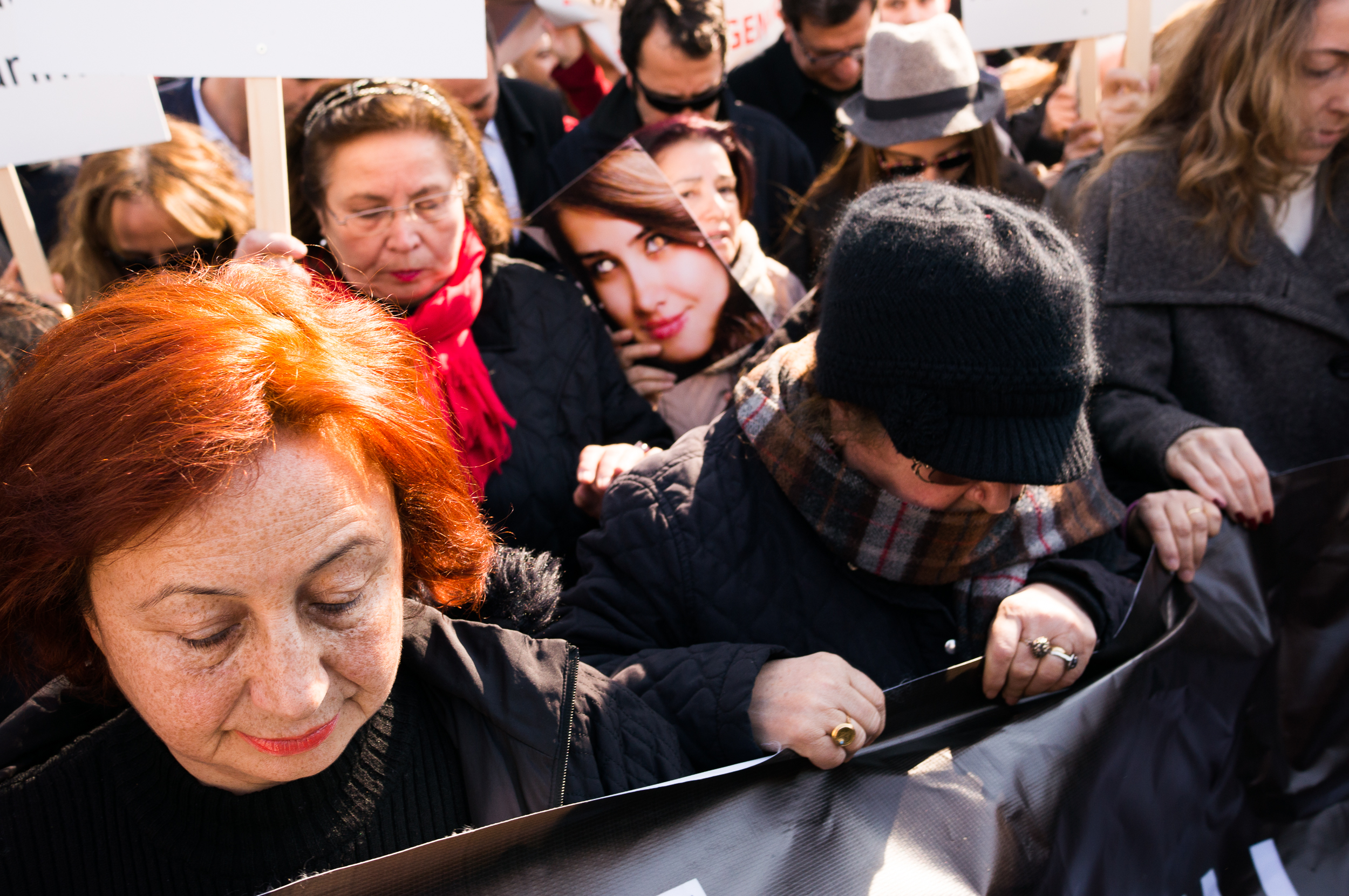 Feb. 22, 2015 - Istanbul, Turkey. People close their eyes and bow their heads in a moment of silence for Özgecan Aslan.

The protest that caught The World’s attention, however, hosted men wearing miniskirts marching along Istiklal Avenue, one of the busiest streets and shopping drags in Istanbul. 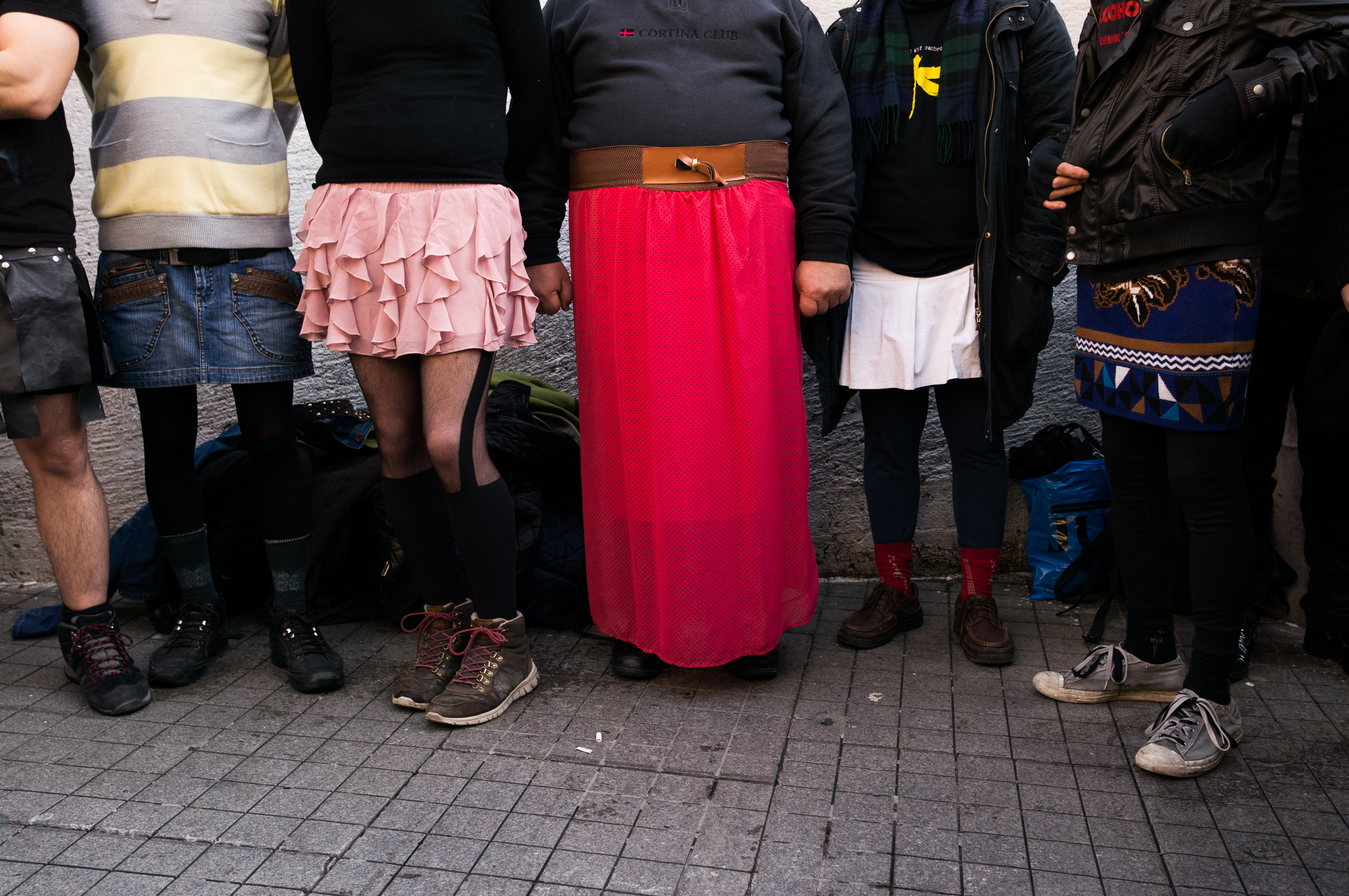 Feb. 22, 2015 - Istanbul, Turkey. Men wear skirts on Istiklal Avenue both to support women's rights and to honor the memory of Özgecan Aslan.

Protesters in Turkey say the country’s ruling Justice and Development Party hasn’t done enough to stop escalating violence against women. And while data on gender-based violence in Turkey varies, many reports suggest that they are right. The Turkey-based press organization Bianet, for instance, recently reported that 56% of the country's 281 women murdered in 2014 were killed by a husband or partner – a 31% increase from the previous year. Yet, very few of the perpetrators faced long sentences for their crimes — and many expect the same to be the case for Aslan.
Consider the Data Yourself

In 2014, Bianet, a press agency based in Turkey, says that 56% of the 281 women murdered in Turkey were killed by a husband or partner.

Across Turkish society, women’s rights have been slipping for the last several years. In 2013, the country ranked 120 out of 136 nations in terms of gender gaps in education, politics, health and economics by the World Economic Forum.

Even Turkey’s president Recep Tayyip Erdoğan has a poor history with women’s rights and advocacy. In November 2014, shortly after winning office, he caught international attention when he said women are not equal to men because it goes against the laws of nature, during a summit on women and justice in Istanbul. And in July, his deputy prime minister, Bülent Arınç, said women should not laugh loudly in public - prompting Turkish women to flood social media platforms with boldly smiling selfies.

While picking up momentum through social media and international attention, the movement toward meaningful women's rights reforms in Turkey may still have a long way to go.

“There were far more spectators and press people than there were men in skirts.”

UPDATE: The original version of this story incorrectly stated that Istanbul is the capital city of Turkey. We apologize for the error, and David Conrad has elected to sign up for remedial geography training.