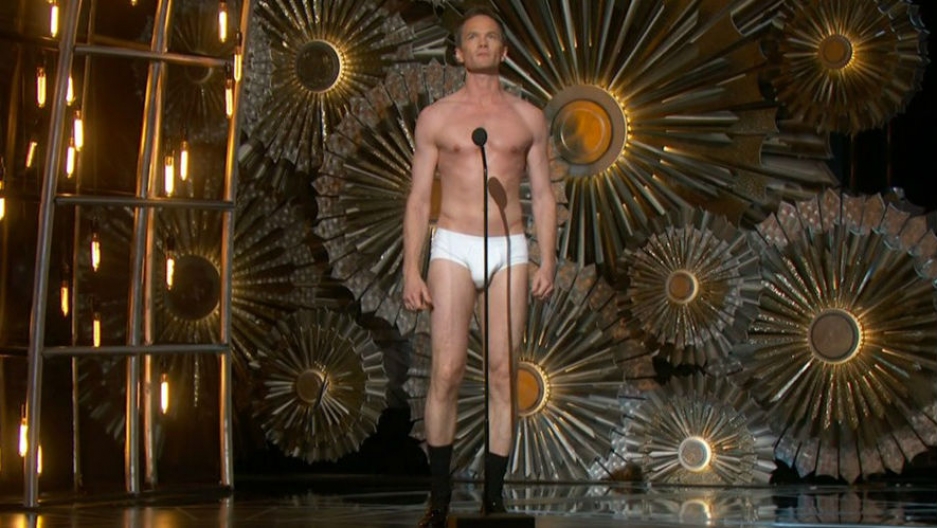 Apropos of nothing, Ellen took a selfielast year. It was all anyone talked about, which spoke volumes of the rest of the ceremony. This year, Neil Patrick Harris came out (briefly) in his underwear--- it will be remembered in the Oscar annals but was actually a reference to Birdman.

Like all happy families, Academy Awards presentations are all mostly thesame. (Although admittedly I never, ever expected to see the journalist Glenn Greenwald on stage at an Oscars ceremony.) The Academy Awards always have their introductory song-and-dance number. This year's musical-theater celebration of the movies was not bad -- especially Jack Black's part, with its spot-on critique of formulaic over-budgeted Hollywood blockbusters:

The Academy Awardsalways have jokes scripted for the host that fall very flat, although the show-long Neil-Patrick-Harris-predictions gag was the monumentally lamest ever. But NPH did comeright out of the gate with a joke about honoring "Hollywood's best and whitest... sorry.Brightest." Therewerestinkersaplenty, buthehad lots of memorable zingers, including "Edward Snowden couldn't be here tonight for some treason" afterCitizenfourwon Best Documentary.

The Academy Awardsalways contain one curiously random-seeming choice:Gwyneth Paltrowintroducing the tribute to...Glenn Campbell? Oscar nightalways features instantly forgettable musical numbers (Adam Levine, Rita Ora), andend up being retro spectacles, unwittingly or, sometimes these days, ironically. Or both: take the magnificentSound of Musicmedleyby Lady Gaga thatgot a standing ovation and impressedJulie Andrews herself.We were also reminded that "Everything Is Awesome," even when a universally acclaimed animated feature is snubbed:

The Oscarsnever include references to the North Korean regime -- and this year, surprisingly, the tradition was maintained.They always have plenty of familial sentiment (as a parent who adores his parents, I was fine with all the parent-thanking) and self-flattering progressive sentiment (the standing ovation for "Glory," the song fromSelma).

At the same time, this year's show seemed to deliver better-than-usual speeches duringunexpected turns. Patricia Arquette seemed to go for the boiler plate, scripted approach, until she transitioned into a rousing appeal for gender equality. Meryl approved:

Independent films led the pack in nominations this year, but have they ever so thoroughly swept the Oscars? The major awards thatBirdman,WhiplashandThe Grand Budapest Hoteldidn't win,Boyhood,The Imitation GameandStill Alicedid. Apart from technical awards and animation, studio releasesessentially won nothing.So maybe Hollywood is an interestingly unhappy family after all.

Actor in a Supporting Role: