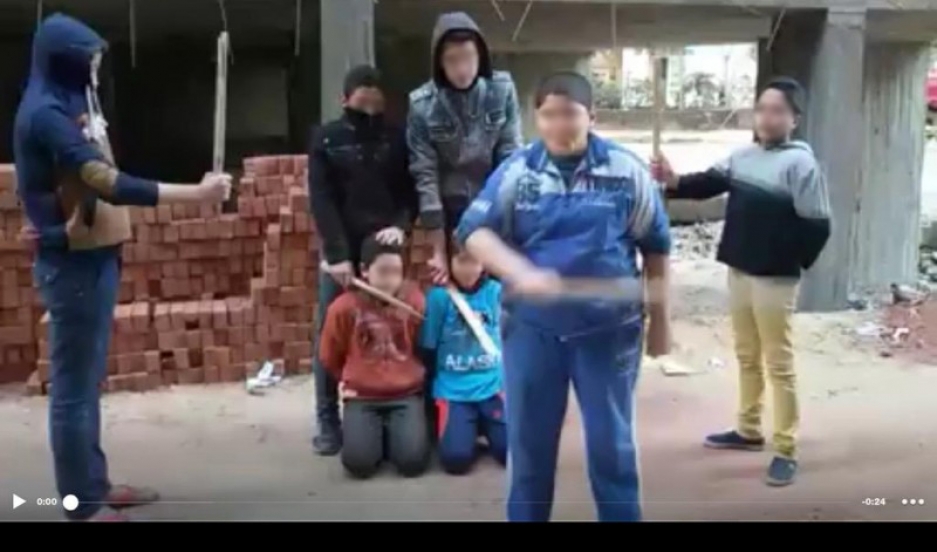 Children in El-Mahalla El-Kubra role-playing as ISIS fightering and “slaughtering” other children. Faces in this screenshot were blurred by Global Voices Online.

Children from Egypt's El-Mahalla El-Kubra, a city north of Cairo in the Nile Delta, were recently recorded “slaughtering” other children in the style of ISIS' notorious execution videos.

The video may have been made after ISIS' offshoot in Libya beheaded 21 Coptic Christian workers from Egypt who were captured more than a month ago. On February 15, the terrorists posted a gruesome and bloody video on YouTube that showed the beheading of the hostages, creating an uproar in Egypt and prompting the Egyptian air force to bomb ISIS sites across the border.

The video raises more questions about the "merits" of sharing horrific videos detailing the terror group's crimes. ISIS, which controls large swaths of land in Iraq and Syria that it calls the "Islamic State," has taken great pride in releasing the highly-produced videos that often feature executioners with Western accents.

Many people have called for media outlets to suppress videos and images of ISIS executions to cut down on their propaganda value for the group. But despite a cat and mouse game to remove the materials online, many continue to share the videos.

Watch this! This is the impact of ISIS videos on children in Al Mahalla Al Kubra. That moment when children in Egypt play ISIS

The child in the video describes the ISIS as fighters without allegiance to any religion or nation. "We slaughter children, women and the elderly," he says. "We have decided the following: To kill all the youth of the town of [inaudible.] Slaughter then, O men!"

There was a time when kids in Egypt, like kids everywhere, played cops and robbers. And the cops would win. And it made me smile. Natural order of things, I'd think. Then after 2011 I've seen kids play cops and protesters. And one cop would ‘kill’ (well, you know, pew pew pew) one of the protesters, who would then revolt, and chase after the cop-kids. And it made me smile – because it was funny, but it was no less sad, because kids shouldn't have to contemplate the mere thought of police brutality. Tonight I saw this video, of kids playing Daesh [an Arabic nickname for ISIS], where first kid gives a little speech (incidentally in better Arabic that the minister of foreign affairs, but i digress) and then gives the order to his acolytes to slaughter the two ‘hostages'. And that's not a game that has a happy ending in any possible way. Nobody wins. This is the saddest thing I've seen in a long, long time.

Comments on this post ranged from “disturbing” to “evolution turning wrong.”

This story by Amira Al Hussaini was originally published by our partners Global Voices Online, a community of bloggers from around the world.